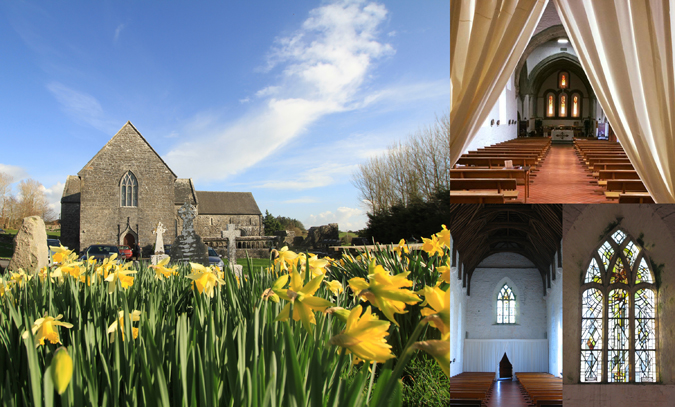 Ballintubber Abbey can trace its origins back to 1216 and the foundation by Cathal O’Conor (Cathal Crobhdearg Ua Conchobair) (1153-1224), King of Connaught, of an abbey for the Canons Regular of Saint Augustine.  A troubled history saw the abbey burnt in 1265, surrendered to the Crown in 1542, and largely destroyed in 1653, but Mass continued to be celebrated within its walls.  Early attempts at restoration saw the insertion of slender Gothic windows which, contrasting with the original Hiberno Romanesque chancel window, prompted commentators to remark on the unusual ‘duality of styles’.  A complete restoration (1963-6) supervised by Percy le Clerc (1914-2002) saw the abbey returned to its former glory: the doorcase, which had been removed in 1816, was also reinstated.  Visitors to Ballintubber Abbey can enjoy a wealth of religious artwork, ancient and modern, including the tomb of Sir Richard Bourke (1567-1629), alias Tibbot ne Long (“Theobald of the Ship”), and abstract stained glass (1972) by Gabriel Loire (1904-96) of Chartres.