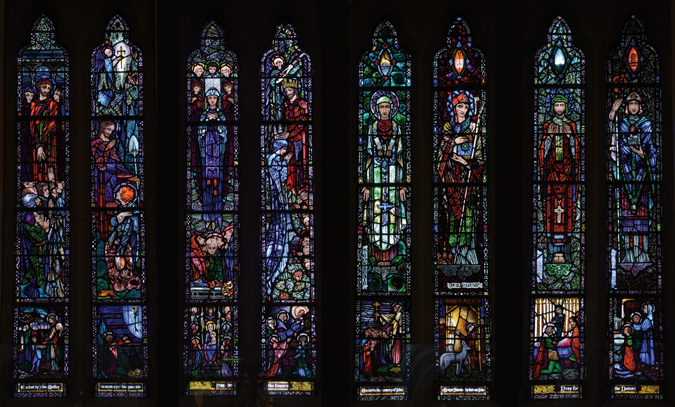 Saint Mary’s Catholic Church can trace its origins back to a reasonably humble parish church erected to a design by Richard Pierce (1801-54) of Wexford drawing on his early career as clerk-of-works to Augustus Welby Northmore Pugin (1812-52).  Later additions, continuing on well into the twentieth century, saw the church completely transformed and included new side aisles designed by Rudolph Maximilian Butler (1872-1943) of Dublin.  It is here that the visitor will see the remarkable collection of stained glass commissioned from Harry Clarke (1889-1931) by Reverend Edward A. D’Alton PP (1865-1941).  A set of four windows in the south aisle depicts scenes from The Life of Christ and The Life of the Blessed Virgin Mary.  The so-called “Early Irish Saints Series” fills the north aisle and includes depictions of Saint Brendan, Saint Colman, Saint Gormgail and Saint Kieran, amongst others.