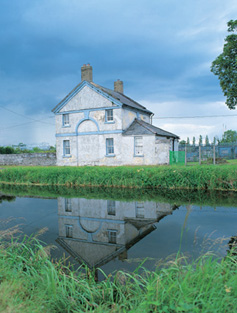 The construction of the Grand Canal, begun 1756 and completed when it reached the river Shannon in 1805, caused a major change to the landscape. The canals needed locks, lock keepers houses, curved quays, and bridges built at intervals along their length. Examples of all these features may still be seen along the Grand Canal in South Dublin County. Work on the initial section of twelve miles, to the west of Clondalkin, had been completed at a cost of 57,000 by the engineer-in-charge Thomas Omer, by 1763. 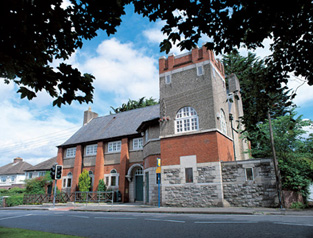 Thomas Joseph Byrne (1876-1939), architect to the first to the South Dublin Rural Council, and later Principal Architect of the Boards of Works was responsible for two fine libraries in the area at Clondalkin and Whitechurch. These were part-funded by money from the Carnegie Trust set up by Andrew Carnegie funds of 170,000 to pay for the building of about eighty libraries in Ireland. Whitechurch library (1911) blends the Arts and Crafts style with Queen Anne Revival. The structure combines granite and red brick with roughcast render. The architect indulges in his favoured motif of varied window types. In Clondalkin, the library is altogether more massive, although it too displays the influence of the Arts and Crafts movement. It also displays the architects liking for varied window types 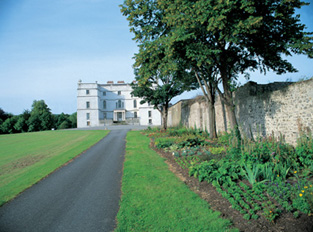 The foundations of the castle date back to the sixteenth century. It was built by Adam Loftus, a Yorkshireman. In the eighteenth century the ownership of the castle passed briefly out the Loftus familys hands for a period of forty years, but was reacquired by Henry Loftus, First Earl of Ely (1709-1783). Under his direction the castle was remodelled and refurbished extensively. Work was finished by 1783, by which time the roofline had been altered, a bow added to the west side and several large windows inserted. The building was also altered internally to designs by William Chambers and James “Athenian” Stuart, creating what is one of the most impressive interiors in South Dublin. A number of related estate buildings were also built during this period, two of which feature in this survey; a two-storey circular dovecote, and the impressive entrance gate, Dodder Lodge, designed to resemble a Roman triumphal arch. The castle was purchased by the government in 1987 and was declared a National Monument. It is now in the care of the Office of Public Works and open to the general public. 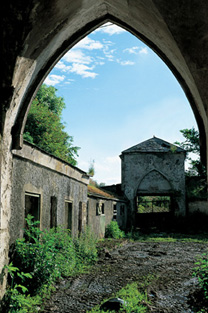 The former Johnstown Kennedy Estate near Rathcoole, includes a most impressive and extensive range of farm buildings. The buildings have courtyards with high walls and dramatic gateways some with pinnacles, curved equestrian buildings, Gothicised doorways, a small dairy, and several well-constructed utilitarian buildings serving various agricultural purposes. There is also a water mill with mill race and a cast-iron mill wheel in-situ. A roadside forge with horseshoe shaped entrance displays the initials E.K. and the date over the door. The remains of a later walled garden with ruined greenhouses, a gardener’s house and other structures, add a further dimension to this outstanding collection of estate buildings. 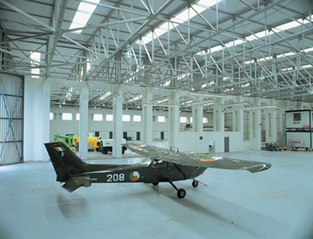 In the early twentieth century, little that could be described as Modern architecture had been built in South Dublin County until large aircraft hangers were constructed (c.1917) at Baldonnell Airfield, now Casement Aerodrome, using huge areas of corrugated metal with brick corner supports and concrete inserts. A valuable, and rare, example of Irish military and aviation history, the scale of these hangars is awe inspiring, dwarfing all other structures in the vicinity. Later, in the 1930s, some well-designed support buildings, a Gymnasium (c.1937) and a Mess Hall (c.1932) were added. The former shows early use of pre-cast concrete trusses and the latter a low, attractive structure, with rich decorative brick detailing, was designed by W H Cooke of the Office of Public Works.