The modern town of Mitchelstown owes its existence to the earls of Kingston who built it between 1776 and 1823. They levelled the medieval settlement which stood on the site they chose for their country house and laid out the impressive new town at its present location on lower ground. King’s Square, laid out c. 1780, is one of Ireland’s great architectural set-pieces. It has two U-plan halves – the southern comprising five-bay two-storey houses and a nine-bay two-storey former hotel; and the northern being a particularly fine complex of thirty-one (formerly twenty) almshouses, with a chapel at the centre of the arrangement. The almshouses were provided for ‘poor Gentlemen and Gentlewomen members of the Church of Ireland’, tenants of the Mitchelstown estate having priority. Unusual double doorways serve four of the houses and there are blind niches at regular intervals between pairs of houses. At the centre of the whole composition is a formal park, divided by the road that led to the Castle and also having an angled road connecting Baldwin and George’s Streets. At the centre of the northern half of the park is the fine cast-iron fountain or water tank erected c. 1825. The houses on the square have good stone detailing in their eaves, quoins, door and window openings and fine cast-ironwork in the railings bounding their basement areas. The decorative stone gate piers of c. 1825 that formed the main entrance to the now-demolished Mitchelstown Castle are on the west side of the square. 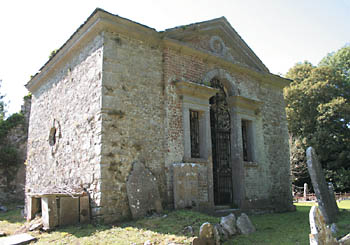 Graveyards are places of remembrance as well as simply repositories for the dead. The wealthier or more notable individuals in a locality were afforded sometimes very splendid memorials. North Cork’s fine mausolea range in date from early in the eighteenth century to late in the nineteenth century. They typically are gable-fronted, square or rectangular-plan structures, often having a pedimented front. Architectural detailing is usually of high quality. Some have elaborate classically-detailed marble or limestone monuments inside. The earliest is the Armstrong mausoleum (1716) at Ballyclogh. Several graveyards have two mausolea, such as Castlelyons with the Barrymore (1753) and Peard (c. 1760) tombs. The Earl of Listowel’s tomb (1846) at Ballyhooly has a Latin inscription and a carved coronet over the doorway. The monument (1765) to John Longfield at Ballyclogh consists of a thin freestanding portico of carved limestone. Opposite the Catholic church at Mitchelstown can be seen the O’Mahoney tombs of 1898, which consist of canopies supported on columns in turn standing on pedestals. Outside the Catholic church at Dromagh there stands the memorial (1836) to Father John Barry, builder of the adjacent church, and which displays exquisite classical detailing, contrasting with the folk art style of the decoration to the church. At Stannard’s Grove, near Rockmills, there is a monument (c. 1830) to a pet dog, in the form of an obelisk. 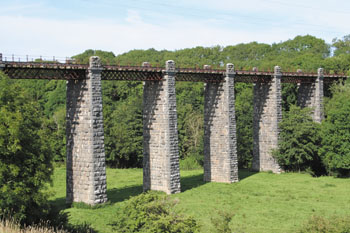 North Cork has been criss-crossed by railways since the middle of the nineteenth century. Some of the associated engineering and architectural structures are amongst the most impressive feats of engineering in Ireland. The most recent is the ten-span Blackrock Viaduct (c. 1925, with later modifications), crossing the Blackwater at Mallow, comprises a box-girder superstructure held up by masonry piers and braced steel supports. Wrought-iron lattice girders are to be seen at Kilcummer Viaduct (c. 1860) across the Awbeg near Ballyhooly and Carrigabrick Bridge (1872) at Fermoy, both supported on rock-faced limestone piers. The Kilcummer piers have a distinctive tapering profile. The last-named was designed by James Otway. Only the Blackrock Viaduct still carries a working railway. 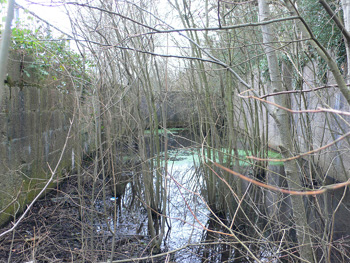 The unfinished navigation canal to the west of Mallow and ornamental canals on a number of country demesnes are amongst the more unusual parts of the built heritage of the region. William Ockenden is credited with the design of the canal intended to connect the coalmines at Duhallow to the sea at Youghal by way of the River Blackwater. It was begun in 1756 and although 10km long, was never completed. It was abandoned in 1786 when road transport was seen to be more economical and advantageous. It is an earth-cut channel, reputedly on the line of the ‘Ballynoe Fosse’, a boundary of the O’Callaghan territory. It was watered by the Blackwater at its west end by a lock which no longer survives. The lock at Longueville is remarkable for being a very rare example of the continental style of lock, being much longer and wider than those employed on the main Irish canal systems. The less utilitarian canals are those ornamenting Doneraile Park, Mitchelstown Demesne and Lisnagar Demesne (at Rathcormack). ‘Lisnagar Pond’, is T-plan and dates to c. 1730. The other canals comprise two rectangular bodies of water, one longer than the other and with narrow channels serving to feed water into and out of the canal as well as connecting the two bodies of water. The ornamental canal at Doneraile Park is well maintained and can be enjoyed by the public, while that at Mitchelstown, standing next to a high cliff on which stood Mitchelstown Castle, is overgrown but still very evident. Other demesnes, such as that of Kilshannig House (near Rathcormack) had smaller canals. Others had lakes or fish ponds.

Church of the Annunciation, Coolclogh 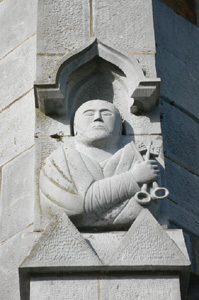 Folk art ornamentation is a fairly rare phenomenon in Ireland. The Catholic church of Coolclogh, near Millstreet, was erected by Fr John Barry in 1833 and is one of the most remarkable rural churches in Ireland. It is architecturally accomplished with a rich collection of folk art detailing, with images of saints, bishops and angels flanking the main entrance, on the tops of the corner buttresses and even on the superbly-wrought tower. The memorial erected in 1836 to the memory to Fr Barry is a tiered structure with an effigy of the priest. It is reminiscent of the church tower and executed in the same architectural style. 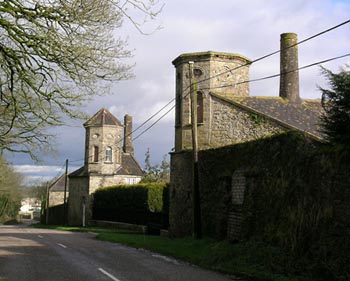 North Cork is notable for its substantial eighteenth and early nineteenth-century country houses. The farmyards associated with these high status dwellings are often distinctive in their own right. A common theme in their architecture and planning is an emphasis on symmetry and classical detailing, emphasising the qualities of the house and illustrating the wealth and ambitions of the owners. A good number of yards survive intact with fine detailing in the craftsmanship of their stonework, especially in their door and window openings, and in their eaves and gables. The farmyard of c. 1770 at Copsetown Abbey incorporates the house in its layout. At Annesgrove, the Home Farm (1870) outbuildings are at a remove. The remarkable outbuildings of c. 1750 at Bridestown Towers have unusually fine detailing, the towers at the road ends being particularly unusual.