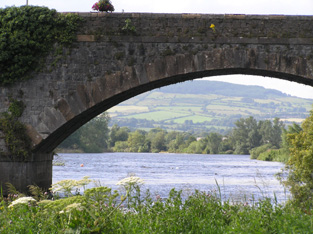 Limerick City has a fine collection of road bridges, which also includes a canal and a railway bridge. James and George Pain were asked to design three bridges when trade revived in Limerick after the slump that followed the Napoleonic wars. By the mid 1820s the city, government and private interests wanted to improve the city’s connection with its valuable agricultural hinterland. Athlunkard Bridge, completed in 1830 and connected to the new town with new roads, brought north and east Clare into the city’s ambit. It linked Park and Corbally with the network of streets on King’s Island, through to Mathew Bridge and on to the Rutland Street-George’s Street axis, and became one of the principal routes within the city and through to the west of Ireland. The narrow and dilapidated fourteenth-century Baal’s Bridge was rebuilt in 1831 to connect Englishtown and Irishtown with an efficient single span. With its construction, the route eastward to Dublin was much improved. Thomond Bridge, also declared to be beyond restoration, was rebuilt in 1840, partially using medieval foundations. It replaced a series of previous bridges dating to the twelfth or thirteenth century, linking the west side of the River Shannon with King’s Island. Sarsfield Bridge, formerly known as Wellesley Bridge, was built to the designs of the Scottish engineer Alexander Nimmo, between 1823-35, and completed by John Grantham in 1835. Spanning the River Shannon it joins Sarsfield Street and the Ennis Road. Under the Act of 1823, the Limerick Bridge Commissioners were incorporated for the purpose of erecting Sarsfield Bridge and a floating dock. The design of the bridge is based on Pont de Neuilly in Paris (1774). Its name was changed to Sarsfield Bridge in 1882. Mathew Bridge was built between 1844-46, to replace New Bridge, which had been constructed in 1762. It connected Rutland Street and Bank Place to the south with Merchant’s Quay, Bridge Street and George’s Quay to the north. This bridge linked Englishtown with the expanding and developing new town. The bridge was erected to the designs of William Henshaw Owen. Lock Quay canal bridge was erected in 1757. It crosses the canal at Lock Quay harbour. This fine canal bridge was restored by Limerick Civic Trust, and survives as one of the few hump-back bridges, along with Baal’s Bridge to survive in Limerick City. It marked a further advancement of the City beyond the walls. The cut stone railway bridge, built c. 1860, carries Corbally Road on a north-south axis over the Limerick to Sligo Great Southern and Western Railway line. O’Dwyer’s Bridge, Athlunkard Street, built in 1931, was an early example of a concrete bridge, made more interesting by the timber breakwaters, which give the bridge a brutalist picturesque quality. It was built near the site of a previous bridge, called Park Bridge. 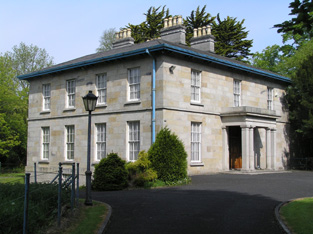 The 1840 Ordnance Survey map of Limerick City reveals three areas of named buildings, set in large gardens, on the banks of the River Shannon just beyond the city boundary. These are the villas built by successful businessmen in the early nineteenth century. Many of them still survive, as institutions or houses, in what are now more densely inhabited suburban areas. To the south-west are Laurel Hill (now a school), Ashbourne and Summerville House (part of Mary Immaculate College). North of the river are house on the North Circular Road, Shelbourne House (part of Ard Scoil Rs), Tivoli (part of Villiers School) and Bellevue. These would later be joined by Sunville, Kilmoyle, Ardhu House (Clarion Hotel Suites) and Beechlawn. Within the two arms of the river to the east are villas on Mill Road. Most of these houses are elegant classical boxes with wide Italianate eaves and porticos. Some are relaxed single-storey over basement, others are more imposing two storeys, often with a central light well. There is usually a neat gate lodge and always gardens, now the location of many of Limerick’s mature trees. 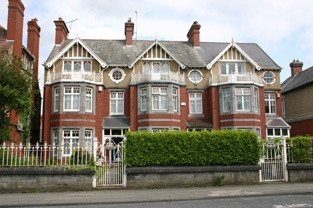 Alongside the general poverty in nineteenth-century Limerick there were success stories and the middle class continued to grow. Terraces and a few detached and semi-detached villas were built on roads leading out of the city such as O’Connell Avenue, South Circular Road, Ennis Road and Mulgrave Street. Usually built of brick sometimes with arched or bay windows, with brick detailing around doorcases, often with long front gardens, and usually with elaborate cast-iron railings, they displayed some of the new domestic fashions from England. However, Georgian features and un-Victorian restraint in the form of flat windows, fine joinery detailing and conservative plasterwork, remained longer in Ireland. One of the most exuberant houses, dated to 1880, is Boru House, the childhood home of the writer Kate O’Brien. It has polychromatic brick and slates, a bay window, decorative timber gates, very unusual fretwork balusters to the staircase and the sculptured O’Brien emblem – a raised arm brandishing a sword – on the front gable. In terms of style the Edwardian period, from 1890 to 1914, is a distinctive episode that is moderately well represented in Limerick. Applied to speculative housing or one-off suburban houses, the Edwardian style gave a new flavour to Victorian building types. Edwardian suburban houses on O’Connell Avenue, Ennis Road and Shelbourne Road were of broadly two types. There were those, which at three storeys and sporting an assortment of balconies, oculi, porches and timbered gables, were brashly confident and almost without direct historical reference beyond the Victorian terrace. Others with horizontal mullioned windows, steeper and sometimes multiple roofs and prominent chimneys owed much to the Arts and Crafts style with its domestic medieval roots, and appear more subtly confident. Most were large houses for the middle class, but there were enclaves of smaller houses such as the simple, symmetrically conceived Verona Esplanade off O’Connell Avenue. 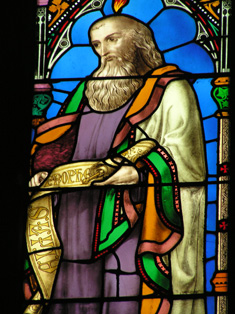 Limerick City has a wealth of ecclesiastical architecture that dates from earliest times to the present day. St Mary’s Cathedral was begun in the late twelfth century or early in the thirteenth century. Although externally altered, the interior illustrates the heart of a building designed under the influence of the Cistercians. The small Catholic chapels built before the Act of Catholic Emancipation in 1829 have been replaced by later nineteenth-century churches, with the exception of St Saviour’s Dominican Church on Baker Place, which was extended and remodelled in the mid nineteenth century. Of the seven non-conformist chapels, three still exist: the Quaker Meeting House (1806), accessed from Cecil Street, the Presbyterian Meeting House, Glentworth Street, and Trinity Church (1834), on Catherine Street. James and George Pain designed St Michael’s Church of Ireland parish church in c.1836. Their Picturesque Gothick design was simplified in execution, and when finished in 1844 looked more like a Board of First Fruits church. In 1827, the medieval St Munchin’s Church was replaced by the Pain brothers with a typical First Fruits church, in a pared down Gothic style. When John Welland succeeded as architect to the Board’s successor, the Ecclesiastical Commissioners, he pioneered a Hiberno-Romanesque style as a replacement for the medieval St John’s, Irishtown in 1851. The Catholic Church began a revolutionary building programme in the mid nineteenth century. St John’s parish church, designed by Philip Charles Hardwicke was opened in 1861 as a cathedral. It owed much to A.W.N. Pugin. Contemporary with St. John’s was the Redemptorist church and monastery, South Circular Road. Its chief charm lies in the beautifully lit side chapels with their stained glass roofs and flower mosaics, George Goldie’s reredos (1865) and the Oppenheimer apse mosaics (1927). The architect was William Edward Corbett. His big commission came with the city’s Franciscan Friary (1876). The Jesuits also designed a classical church. Although uncomfortably inserted into The Crescent, it has a light interior enhanced by a fine neo-classical altarl. St Michael’s parish church, at the foot of Chapel Lane, was built to replace an earlier chapel in 1881. It was an early Catholic Hiberno-Romanesque church. Two Gothic Revival non-Conformist churches, the Baptist Church (1894), on Quinlan Street and the Presbyterian Church (1899), on Henry Street, have a definite Edwardian character where their asymmetry owes more to creating an interesting public faade than to Puginian or ecclesiological dictates. The Catholic Church continued to commission revival buildings in the Victorian idiom: St Joseph’s (1900), designed by W.E. Corbett, is a classical design, while St Mary’s (1930), Athlunkard Street by Ashlin and Coleman, and the Augustinian Church (1942), O’Connell Street, were designed in what had become the popular Hiberno-Romanesque style. The Church of Our Lady of the Rosary (1951), Ennis Road, designed by Frank Corr and Liam McCormick, expressed the functions of the pre-Vatican II liturgy in the traditional way. Constructed from a light steel frame and clad in timber weather-boarding with clerestory windows running the entire length of the building, it is modern in appearance and character and seems the epitome of modern functionalism. 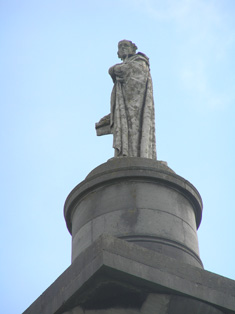 Limerick’s public monuments are many and varied. The Rice Memorial is erected in the classical tradition, with a soaring column demonstrating an awareness of classical urban design, and a concern with local interests and the promotion of civic and national aggrandisement. The origins of this classical style lay in Imperial Rome, and these monuments were built in emulation of the grandiose gestures of Roman emperors. Thomas Spring Rice (1791-1866) supported the building of the Newtown Pery suburb of the city. It was fitting, therefore, that his monument should have a prominent place in the center of a square (now Pery Square) at the eastern edge of the new town. Irish nationalism gathered momentum in the early nineteenth century. The first outdoor public statue of Daniel O’Connell was unveiled in Limerick in 1857. In 1855 there was competition for the chosen site from a rival proposal to erect a monument to Viscount FitzGibbon who had died at the Battle of Balaclava in the Crimean War. Sufficient money was raised to commission John Hogan, and the O’Connell monument was unveiled in 1857. O’Connell is represented as a Roman with toga and looks towards the street named after him. He is nearer to the people than those on top of columns, such as the Rice Memorial. The monument to Viscount FitzGibbon was finally built in 1857. He was a member of the Earl of Clare’s family whose house, Mount Shannon, was situated near Limerick. Patrick McDowell was commissioned to carve the statue, which was given an exposed position on Wellesley Bridge (now Sarsfield Bridge). It was toppled in 1930. In 1845 a committee formed to erect a monument to Patrick Sarsfield, the general who had defended the city until it was overwhelmed by William of Orange’s army. Sarsfield who had led the Jacobite war party in 1690-91, had been a charismatic figure. A sketch was made of Sarsfield in the costume of a general of the period and this was sent to John Lawlor (1820-1901), the prominent Dublin sculptor, in 1875. The corporation refused a prominent site in the fashionable Newtown Pery near to the newly opened People’s Park (1877). A place was found in the grounds of St John’s Catholic Cathedral. In 1865 a curio from the Treaty of Limerick was elevated to the status of public monument. This block of limestone known as the Treaty Stone is reputedly the stone on which the Treaty of Limerick was signed. The Celtic Revival style was used in the erection of the monument to the Manchester Martyrs in 1890. Eire is personified as a kneeling figure in classical dress. In the twentieth century, the dead were remembered in the form of the War Memorial on the west side of Pery Square. Its stylised carved Celtic knotwork reflects the continuing interest in the Celtic Revival.