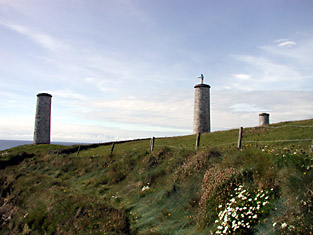 County Waterford lies on the south-east coast of Ireland. The coastline largely consists of small sheltered bays and ranges of low cliffs. Waterford’s maritime importance over the centuries has been reflected by the development of small harbours along the coastline, together with a range of related ancillary structures. Following pressure on the Westminster government in the early nineteenth century to improve postal services between Ireland and England, a new harbour was developed at Dunmore East, superseding Cheekpoint as the port of the packet boat service. The pier and distinctive lighthouse designed by Alexander Nimmo (1783 – 1832) formed the centrepiece of the development of the harbour. Nimmo is attributed with the design of the collection of five beacons flanking the notorious harbour at Tramore, one of which, the ‘Metal Man’ Tower, is surmounted by a cast-iron figure wearing a sailor’s uniform. A number of lighthouses were erected along the coastline by the Commissioners of Irish Lights and include the example at Mine Head, which forms part of an enclosed complex with associated lighthouse keepers’ houses. Ballynacourty Point Lighthouse was built to guide mariners to the harbour that features a pier incorporating a distinctive swept batter. Many of Waterford’s fishing villages featured a coastguard station, a number of which appear to have been built to a standard design. The station at Tramore originally contained residential accommodation for coastguards, each unit accessed by its own porch; the station is presently (2003) undergoing extensive restoration works. Larger coastguard houses form the Atlantic View terrace and are positioned on an elevated site overlooking the Atlantic Ocean. A collection of six coastguard houses at Dunmore East were destroyed by fire in 1922, and were subsequently adapted to use as three terraced houses. Robust rendered Classical detailing belies the utilitarian purpose of the scheme, and enhances the streetscape value of Dock Road. 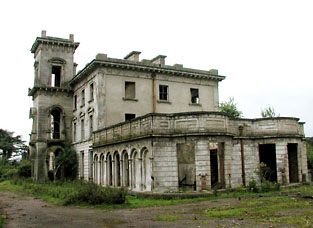 In the 1820s a ‘Model’ village was developed at Portlaw to house workers at the cotton factory that had been established by David Malcomson on the banks of the River Clodiagh in 1825. An expansion programme in 1837 – 1839 witnessed the factory building double in size, and attested to the considerable success of the industrial venture. A canalised section of the River Clodiagh powered two enormous waterwheels, while a slender tapered chimney further enhanced the group quality of the site. In the 1850s and 1860s, under Joseph Malcomson, the village was redesigned using formal planning principles. Wide streets with uniform house frontages and straight axes radiated from a central open space known as The Square, which formed the commercial centre of the village. Workers’ accommodation comprised fifty two-storey houses, and more than two hundred and fifty single-storey houses on a uniform pattern. The exterior walls were of lime rendered rubble sandstone, and each house incorporated a distinctive roof, known as a ‘Portlaw roof’, a type developed by the Malcomsons to be both efficient and cost effective. Layers of tarred calico were stretched on curved trellised softwood frames to form a shallow segmental weatherproof covering. Decorative timber bargeboards furnished the overhanging eaves, enhancing the picturesque visual effect. John Skipton Mulvany (1813 – 1871) is believed to have been responsible for the design of the planned ‘Model’ village at Portlaw, and was the favoured architect of the Malcomson family. Mulvany was also responsible for the large-scale private residences that the Malcomsons developed enclosing the village, including Mayfield House, Woodlock House (also known as Portlaw House and now known as Saint Joseph’s Convent), Clodiagh House, and Milford (Millfort) House. Each of the houses incorporates stylistic attributes in common, whether it is the decorative rendered treatment to the openings, or the bow-ended wings that are featured at Mayfield and Woodlock. The Malcomson venture at Portlaw prospered until the consequences of the American Civil War (1861 – 1865) pushed the firm into liquidation in 1876, closing the mills and prompting mass emigration from the area. The Mayfield Spinning Company operated on site until 1904, and after a prolonged period of inactivity, the Irish Tanners Company was established in 1935 under the government’s protectionist policies. Following closure in 1985, the village met with further decline, but is presently undergoing some regeneration as a satellite town for commuters working in Waterford City. 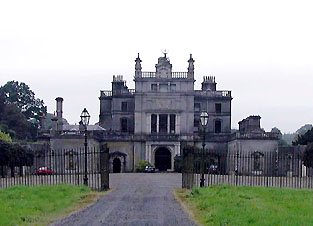 Evidence of early settlement at Curraghmore exists in the present house in the form of the entrance bay, which incorporates the fabric of a medieval tower house. Adapted in 1654 and in 1700 (by James Power) resulting in accommodation appropriate to a gentleman’s status, the redevelopment of the house flourished under Catherine Power (d. 1769) in the mid eighteenth century. Two substantial ranges of outbuildings were completed by John Roberts (1712 – 1796), enclosing an impressive courtyard, which is considered to have no precedent or parallel in Ireland. The interior of the house was completely reordered by James Wyatt (1747 – 1813) in the neo-Classical style under the direction of George de La Poer (b. 1735), and includes decorative schemes by the pre-eminent artists of the age. A complete renovation programme in the mid to late nineteenth century included the encasing of the disparate elements of the main block in a cohesive stylistic identity by Samuel Ussher Roberts (1827 – 1900), a descendent of John Roberts. The building programmes of the eighteenth and nineteenth centuries included the development of the grounds of the estate, each resulting structure highlighting the various activities necessary in the maintenance of a large-scale landholding. An extensive farmyard complex was carefully planned to encompass barn, outbuilding, stable, and workers’ ranges. Each of the avenues through the estate was terminated by an ornate gateway and attendant gate lodge. Tower Hill Cottages and Sallyhene Cottages were built on the extremities of the estate as housing for estate workers. In addition to utilitarian structures, ornamental buildings furnished the grounds and include the shell cottage built by Catherine Power; a rubble stone building of rustic quality, the interior is enlivened by the application of exotic shells to the walls, producing a jewel-like visual effect. Each of the buildings in the demesne having been well maintained, the Curraghmore House estate forms an important element of the architectural heritage of County Waterford.