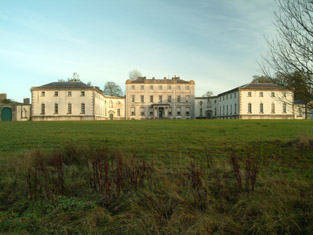 The demesne house is an architectural type that, in Ireland, is very much associated with the eighteenth century. Sadly, the King House and Strokestown Park are the only two great houses of the eighteenth century still to survive in Roscommon. Many others have disappeared, including Mantua (c. 1747) and French Park (c. 1730), the designs of both have also been connected with Richard Castle. However, in County Roscommon the most magnificent example was built in the nineteenth century: Rockingham, on the shores of Lough Key, near Boyle. Following the fire in 1957, the estate was sold to the Department of Lands, who, despite initial plans to restore the house, razed it to the ground in 1970. King House in Boyle dates from 1720-30. The King family was one of the most significant land-owning families in the county, holding almost thirty thousand acres. It is unusual in being an estate house situated in a town. This is partly due to the fact that the house was built on the site of an earlier family home (c. 1650) that had been destroyed by fire in 1720. After many years of neglect, the King House has recently undergone a magnificent restoration and it is now a civic amenity. Like the King House in Boyle, Strokestown Park was significant in the growth of the town in which it was built – but in a much more direct way. The town was formally conceived by Maurice Mahon, and orientated on his demesne house. The entrance gates of the house terminated the vista along the grand main street of the town. Rockingham (now Lough Key Forest Park) was built from 1810 by Robert Edward King, first Viscount Lorton (1773-1854), a descendant of Sir Henry King, who had built King House in Boyle. King House was sold to the army and converted into a barracks at the end of the eighteenth century. The family subsequently lived in a house at Rockingham, their lakeside demesne outside Boyle, and in their Dublin town house in Henrietta Street. While nothing of the house remains, a sense of the scale and grandeur of the entire scheme can be found in the surviving network of ancillary demesne structures, such as the servants. tunnels like those already seen at Strokestown. The remains also survive of the ice-house, which was an essential for the maintenance of an estate house of this scale. There is a bow-fronted and colonnaded ‘tiara’ gate-lodge, which is fully classical and has extremely high-quality stonework. There are picturesque hunting lodges in a romantic castellated style, such as Carty’s Castle and the now ruined Cloontykilla Castle. The landscaping of the demesne also included bridges and eye-catchers, such as the elaborate, wildly grotesque, rustic stone Fairy Bridge or the circular fishing ‘temple’ or gazebo at the end of a causeway, projecting into the lake.

THE SIGNIFICANCE OF THE RIVER SHANNON 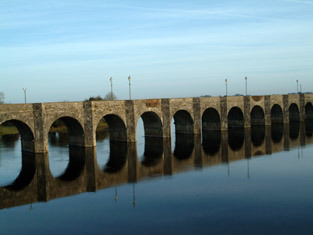 In the 1790s the French Revolution and the subsequent wars between England and France added to the political instability of the period. The attempted French invasion at Bantry Bay of 1796 and the events of 1798, culminating in the French landing at Killala, showed the vulnerability of the country to the very real threat of invasion. The importance of defending the coast was keenly felt. Much of the county Roscommon.s boundary is water: the River Shannon forms the entire eastern boundary, and its tributary, the River Suck, a considerable portion of the western. To this end, when hostilities broke out again against France in 1803, a major building programme of defensive works was instigated. Over fifty martello towers were built around the coast, along with batteries and signal towers. The French force which had landed at Killala in 1798 had succeeded in crossing the Shannon, highlighting the importance of defending the crossing-points of the river. The most impressive structure to be built was the massive bridgehead (or tte-de-pont) defence at Shannonbridge (1812-17). It was built to defend the highly strategic and immense masonry bridge, completed in 1757. The structure has sixteen arches (an additional navigation arch was added in the nineteenth century) and was very significant in the internal communications of the country generally. In the early nineteenth century it was the nearest crossing-point of the river to Galway Bay. The Shannonbridge fortifications are laid out on the west bank of the river, on high ground, in an almost symmetrical arrangement, in line with the axis of the bridge. The complex was built on a triangular plan with corner bastions. It comprises a front glacis (a steep slope), behind which is an armed redoubt with gun-loop openings. Projecting into the ditch separating the glacis and redoubt is a caponnire, a bomb-proof vaulted structure, with musket-loops flanking the ditch. Behind these defensive structures, closest to the bridge, is a barracks and a small-arms battery. The building itself was defensible: the roof is flat, supported by barrel vaults below, and it had three guns on traversing platforms. Altogether, this complex of buildings is unique in Ireland or Britain. The early decades of the nineteenth century saw an improvement in communications through the country – both river and road. Along the River Shannon the first major campaign of navigation improvements (between Killaloe and Carrick-on-Shannon) had been completed between 1755 and circa 1769. The second campaign (of similar geographical extent) was between 1839-50. With the Shannon forming most of the eastern boundary of Roscommon, these improvements had a strong impact on communications within the county. The five-arch road-bridge at Roosky on the county boundary with Leitrim is an example of the Shannon Navigation Commissioners. second campaign of improvements. Built in 1845, it is typical of the design adopted by their engineer, Thomas Rhodes. The low segmental profile of the arches makes it possible to maintain a level roadway for the full width of the bridge. With the adjacent moorings and quay, the bridge would have been an important factor in the growth of the settlement. As improvements continued to be made to the river during the century, ancillary structures, such as the stepped cut-stone beacon, were erected. Improvements also took place on other rivers around the county during the nineteenth century: for example, the impressive thirteen-arch road-bridge over the River Suck at Ballyforan, on the border with Galway. Built about 1820, the long bridge is constructed of random-coursed stone walls with cut-limestone voussoirs to the arches, and V-shaped cutwaters to both the up- and downstream sides. The great length of the bridge conveys the scale of the engineering improvements which took place during the early years of the century. 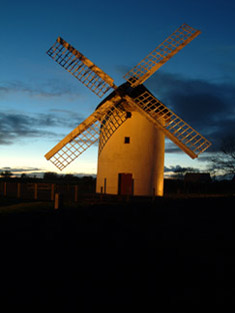 From the mid-1730s there followed a period of sustained economic growth in Ireland. The expansion in the agricultural sector led to rising prices and a growth in trade. This increase in agricultural productivity lead to a commensurate growth in related industrial development throughout the country. In Castlerea, a corn-mill was built in the early years of the century by the local landlords, the Sandfords of Castlereagh House (now demolished). The remains survive of the mill-wheel and race, and the workers’ accommodation. According to Samuel Lewis in his Topographical Dictionary of Ireland (1837), there was at that date a ‘very extensive distillery’ (which was connected with the corn-mill, along with a brewery and tannery), producing more than 20,000 gallons of whiskey annually. A mill complex, dating from the end of the century, still survives in Athleague. This mill is also no longer in use, but it is more intact than the one in Castlerea. In addition to the four-storey mill building, there is an operating mill-wheel and race, as well as a drying-kiln. The adjacent weir and sluice provide a dramatic illustration of the industrial practices involved in the milling process. The good network of rivers meant that mills were also established in other places around the county, such as in Roosky, Lecarrow and Boyle. Windmills were erected in a number of places, the open expanses of parts of the county being very suitable. They were mostly erected by local landlords who obliged their tenants to mill their grain there and pay a toll for the privilege. A rare insight into this aspect of Ireland’s industrial heritage can be found at the fine windmill in Elphin. The windmill was originally built about 1730, probably by the local land-owner, the Bishop of Elphin, Edward Synge. After the Napoleonic wars ended in 1815, cereal-milling became less profitable and many windmills fell into disuse thereafter; that at Elphin was already in ruins by the 1830s. It was restored to full working order and was opened as a visitor attraction in 1996. It is a round three-stage structure with a rye-thatch rotating roof and has four timber sails. The ruins of a few other windmill structures survive. One such example is the Loobinroe Windmill, at Correal, near Mount Talbot, which was built about 1750. Like the windmill at Elphin, it is a three-stage structure, but the battered, or sloping, walls of random-coursed rubble-stone masonry give it a more imposing presence. Sited in an elevated position and enclosed by a stone wall, it remains, though ruined, an impressive structure.