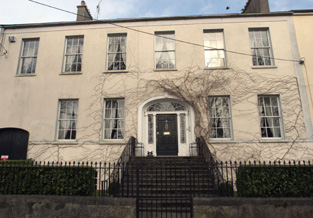 Birr is among the most architecturally significant towns in Ireland, and retains a generous range of quality urban buildings dating back to the early eighteenth century. Churches, shopfronts, terraces of fine houses, church halls, schools, convents, all share a setting of inspired town planning that had elegant malls, squares and vistas laid out in a coherent fashion. The town owes much of this architectural legacy, to the successive Earls of Rosse. One of the primary architectural developments was the laying out of Cumberland Square during the 1740s; its centrepiece was a tall Doric column supporting a statue of the Duke of Cumberland. The square was later renamed Emmet Square in honour of the patriot Robert Emmet. The square was one of two open squares at either end of the long Main Street. The southern Market Square is situated in the core of the older part of the town. The town gradually expanded northwards from the eighteenth-century Cumberland Square development. Both Oxmantown Mall, the wide thoroughfare that leads from the gates of Birr Castle to Emmet Street, and John’s Place were laid out as plots during the 1820s, although some were not built on until the mid-1830s. On both streets there were variations in the types of house built, although all conform to a pleasant, if provincial, reading of the Georgian style. Particularly striking is the retention of so many of the small original features, such as windows, railings, walls, street-furniture and gardens, that have been lost in so many other towns in the county. John’s Place is a wide, pleasant urban space with a crescent-shaped green and houses lining both sides. Several of these houses are terraced and have similar wide doorways with columns, decorative architraves and spoked fanlights. Original ironwork, glazing patterns and limestone steps are also in situ, and it is the retention of these features that gives these terraces their lasting appeal. 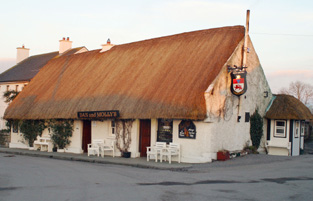 The vernacular architecture of Offaly is perhaps best exemplified by the county’s stock of thatched buildings. Both of the principal vernacular house types can be seen. Lobby-entry houses have a small lobby formed by a screen wall protecting the kitchen hearth from the front door and direct-entry houses have their hearth and door at opposite ends of the kitchen. Direct-entry houses are more numerous in the west of the county, and hipped roofs tend to be found to the east of Tullamore. Thatching techniques also change from scolloped thatching to thrust thatching as one travels eastwards. Vernacular buildings are difficult to date but surviving examples appear to date mainly to between 1750 and 1850. The majority of houses are single storey and rural. Formerly, long rows of small thatched houses were common in the towns of Offaly but these have now been replaced by newer housing. Older vernacular roofs are notable for their timbering of tree boughs, branches and twigs. Rubble stone is used to form the walls of most of the vernacular buildings, although clay (‘mud’) walling gets more prevalent as one travels eastwards.

The Architecture of the Grand Canal 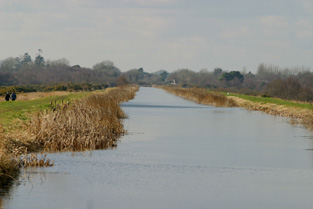 The Grand Canal is the main canal within County Offaly and links Dublin with the River Shannon. It crosses the Kildare border near Edenderry and runs west through Tullamore to Shannon Harbour on the River Shannon. It was built by the Grand Canal Company in two stages – as far as Tullamore in 1798 and then on to Shannon in 1804. A short spur to Tullamore Harbour, its terminus, from 1798 to 1804, and branch lines to Edenderry and Kilbeggan were constructed – Edenderry opened in 1802 and Kilbeggan in 1835. The advent of the canal brought about a whole new range of building types, most notably, the elegant canal bridges with date plaques, that grace the county. A unique building type within the county is Blundell Aqueduct, which is the only example of a canal-over-road crossing. Some of the bridges were named after local landlords who contributed towards the building costs. The many bridges with associated hotels, lock-houses, harbours and warehouses are testament to the skill of the stonemasons who worked on them. 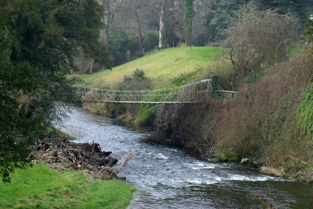 Footbridges are the most uncommon bridge type found in County Offaly; the most common type being the road bridge. With suspension bridges, cables anchored at either end support the deck. Chain Bridge, erected at Birr Castle, is a most interesting piece of architecture and engineering. A similar bridge was erected at Kinnitty Castle. These two bridges are among the earliest cable suspension bridges found in Europe. Both are within demesnes and were thus restricted to private pedestrian use, which may have aided their long existence. Their catenaries comprise lengths of parallel iron wires rather than the forged chain link or twisted steel cables more usually found in surviving examples elsewhere in the country.

Items of interest in the County Offaly landscape 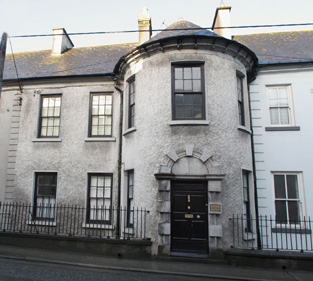 The telescope at Birr Castle, a 72-inch reflecting telescope supported on Gothic style ashlar limestone walls, was until 1917 the largest in the world; the original lens is now in the Science Museum in London. Follies, dating from the eighteenth and nineteenth centuries, were popular garden features on estates, where they often took the form of towers. Other types of small functional buildings often found on estates were dovecotes and icehouses. The first housed birds for the table and the second was used for storing ice for the preservation of food. Dovecotes were sometimes situated close to agricultural buildings, particularly granaries where the doves could feed on spilled grain. The Royal Shannon at Banagher is an interesting town house. The use of the curved bay is a distinctive and notable feature of some County Offaly houses. This element, and a preference for extra-wide doorcases with fanlight over, runs like a constant theme through the architectural heritage of the county, from the early years of the eighteenth century, through the nineteenth and in some cases into the twentieth century.