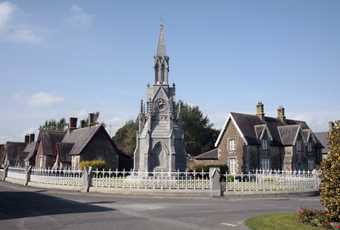 The picturesque village of Ardagh represents a rare example of an Irish estate village dating from the second half of the nineteenth century. The streetscape is characteristic by projecting gabled entrances, dormer window openings, latticed windows with chamfered cut stone surrounds, decorative brick chimneystacks, pierced bargeboards and attractive cast-iron railings and gates. The village was improved between 1862 -3 by Sir Thomas John Fetherston (1824 – 1869) of Ardagh House, who employed the architect (and friend) James Rawson Carroll (1830 – 1911) to rebuild the village as a memorial for his late uncle Sir George Ralph Fetherston (1784 – 1853). Rawson’s scheme involved the construction of a number of estate worker’s houses of various designs, a land agent’s house, an RIC barracks, a post office, and a courthouse, centred around a triangular village green, with an earlier Church of Ireland church enclosing the east end of the village. The village is laid-out so that the demesne of Ardagh House forms the north end of the village and the front elevations of the vast majority of the estate buildings in the village face towards the front of the house. The impressive and richly ornamented Gothic-style clock tower to the centre of the village green forms the focal point of the entire project. An inscription to this clock tower commemorates Sir George Fetherston’s ‘life-long devotion to the moral and social improvement of his tenantry’. Well-maintained, Ardagh is one of more charming estate villages in Leinster. The records for Ardagh House and the Church of Ireland church are also included in this survey highlight. 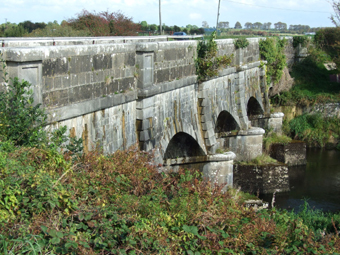 The Royal Canal snakes its way through the southern half of County Longford, and enters the River Shannon, via an earlier canal, at Cloondara, formerly Richmond Harbour, to the west of Longford Town. It was constructed to provide an important communication route from Dublin to the centre of the country, opening up the midlands to trade and industry as well as providing for passenger traffic. This monumental feat of engineering had a profound impact on the landscape of south County Longford and finely built canal bridges, locks and lock-keeper’s houses became familiar features. The quality of the workmanship involved was of a very high standard, particularly in the bridges, which is testament to the skill of the craftsmen involved and of the long-term ambitions of the Royal Canal Company and later the Directors of Inland Navigation. Of particular note is the magnificent five-arch Whitworth Aqueduct, near Abbeyshrule, which is arguably the single most impressive feature along the entire length of the canal. The Royal Canal Company was set up in 1788 as a northern rival to the Grand Canal. Construction of the mainline commenced in Dublin in 1789/90, and the canal was completed as far as Mullingar, County Westmeath, in 1806. The construction of the last stretch of canal from Coolnahay (the summit level) to Cloondara/Richmond Harbour was carried out between 1813/4 and 1817 by the Directors of Inland Navigation, who took over responsibility for the canal after The Royal Canal Company was dissolved by Act of Parliament in 1813. The work was overseen by the talented Irish surveyor and engineer John Killaly (1766 – 1832) and the main contractors involved was the firm Henry, Mullins and McMahon. It cost c. £1,421,954 to complete, an enormous sum of money at the time, and its construction was fraught with financial, political and engineering difficulties. In 1826 work commenced on a new five mile branch canal linking the Royal Canal main line with Longford Town. The work was again overseen by John Killaly. The canal was completed in 1830/1 and a large harbour was constructed at the south end of Longford Town. This harbour is now infilled although a number of canal-related structures still survive in the town. The canal was never a real financial success, although it was carrying 134,000 tons of goods traffic annually by 1833, while passenger traffic peaked at 46,000 in 1837. However, County Longford only accounted for a very small proportion of these figures. The coming of the railways signalled the demise of the canal. In 1845 the Midland Great Western Railway Company purchased the entire canal for £289,059, principally to use the land adjacent to lay down railway lines. Traffic along the canal plummeted with the opening of the railway and by the 1880s only 30,000 tons of goods were being transported annually. The Royal Canal officially closed to commercial traffic c. 1961. After decades of abandonment, when large sections of the canal were left to become dry and choked with vegetation, the Royal Canal is now being restored and will provide an important leisure and tourist amenity to County Longford. 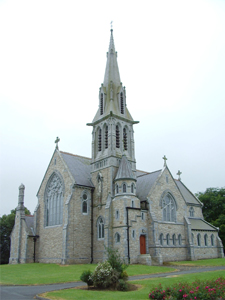 For a relatively small county, Longford has a notable collection of churches, mainly dating from the early nineteenth-century to the mid twentieth-century. One of the earliest surviving churches is the Presbyterian meeting house at Corboy, just to the north of the main Edgeworthstown to Longford Town road. This distinctive structure was built or rebuilt in 1729 and is the earliest surviving Presbyterian meeting house in continual use outside of Ulster. The extraordinary activity of the Church of Ireland’s Board of First Fruits (1711- 1833) during the late eighteenth and particularly during the early nineteenth-century resulted in the construction of numerous small-scale two or three-bay halls with attached towers. Typical examples are St. Catherine’s Church at Ballymacormick and at the church at Granard. In the larger towns, Church of Ireland churches usually had spires, as can be found at Longford Town and at Ballymahon. Where there was patronage from a wealthy landowner, standards went up, such as at St. John’s, Ballinalee, and St. George’s, Keenagh, which were both constructed using funds donated by the Countess Dowager of Rosse (of Newcastle House), and at St. Paul’s in Newtown-Forbes, which was patronised by the Forbes family. An interesting feature found at a number of the Church of Ireland churches in Longford is the presence of side vestibules flanking the tower to the west end. Examples of this can be found at Ardagh, St. Munis Church at Forgney, and at St. Anne’s Church, Kilglass. There are few Church of Ireland churches dating from the second half of the nineteenth century in County Longford. A notable exception is St. John’s, Lanesborough, which was built between 1858 – 1862 to designs by Joseph Welland. Roman Catholic churches saw a similar increase in activity during the early-nineteenth century. Early-to-mid nineteenth-century churches were typically simple ‘barn’-like halls or T-plan in layout with little decoration, such as found at Cluan-a-Donald at Cloondara, at Cullyfad and at Moydow. Following Catholic Emancipation in 1829, the Roman Catholic Church had the resources to build larger and more impressive edifices. One of the most impressive church buildings constructed in Ireland in the decades following Emancipation is St. Mel’s Cathedral in Longford Town, an ambitious and complex large-scale classical structure that was started c. 1840 but was not completed until the 1890s. It was originally designed by John B. Keane (died 1859) but much of the work was carried out later first by John Bourke (died 1871) and then by George Ashlin (1837 – 1921). The second half of the nineteenth century witnessed a marked increase in the quality of Roman Catholic Church buildings constructed throughout Ireland. In County Longford, this is manifested in the construction of John Bourke’s fine church at Granard, and particularly at St. Brigid’s Roman Catholic Church at Ardagh, a magnificent and richly-detailed structure that was built to designs William Hague (1836 – 1899) between 1878 – 1881 and must rank of one of the finest churches of its date in Leinster. The twentieth century witnessed the construction of St. Columbkille’s Church in the extreme north end of the county, close to the border with County Cavan. This church was built to designs by Ralph Byrne (1877 – 1946) in 1939 and is an interesting, if modest example of Hiberno-Romanesque church architecture, while Rudolph Maximilian Butler (1872 – 1943) carried out a quirky remodelling of an earlier T-plan chapel at Drummeel from 1929 – 1933, creating a highly distinctive and unusual building. New styles were adopted for church building projects following liturgical changes after The Second Vatican Council (1962 – 65). Our Lady of Lourdes Church at Abbeyshrule and St. Dominic’s Roman Catholic Church at Keenagh are probably the best examples of modern churches in the county. Both of these churches were built to designs by John Kernan in the early 1980s. 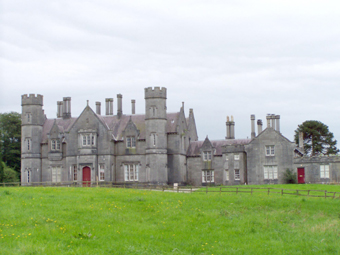 Carrigglas Manor is one of the larger and more impressive country estates still extant in County Longford. It features buildings from two distinct periods and in two different architectural styles. The present Carrigglas Manor is built on, or close to, the site of an earlier house. The estate was originally a manor of the Church of Ireland Bishops of Ardagh. It was left to Trinity College, Dublin, in the seventeenth-century and was later leased by Trinity College, c. 1695 (deed), to the Newcomen family (later the Gleadowe-Newcomen family), who had a residence at Mosstown, near Keenagh, from the seventeenth-century. The estate appears to have been later bought by the Newcomen family in 1772. The owner/resident at the turn of the nineteenth-century, Sir William Gleadowe-Newcomen, commissioned the eminent neoclassical architect James Gandon (1742 – 1823) to design for him an unusual house/villa. Gleadowe-Newcomen later went bankrupt, following financial troubles that led to the eventual collapse of the Newcomen Bank, before work could start on this house/villa. However, a magnificent stableblock and farmyard with central pedimented archways, and an elegant triumphal arch gateway incorporating gate lodges to either side, designed by Gandon were built at Carrigglas. An unusual walled garden on oval-plan and a gardener’s house may also have been built to designs by Gandon. Carrigglas was leased to, and later bought by Thomas Lefroy (1776 – 1869), c. 1833. Lefroy had an eminent political career serving as Baron of the Court of Exchequer in 1841 and later as the Lord Chief Justice of Ireland (from 1852). Reputedly, the character ‘Mr. Darcy’ in Jane Austen’s ‘Pride and Prejudice’ was based on the Thomas Lefroy (they met in England when Lefroy was attending college there during the late-eighteenth century). Lefroy engaged the architect Daniel Robertson (died 1849) to design a new house for him at Carrigglas, c. 1837, demolishing the earlier country house to site. Robertson designed the new house in an Elizabethan/Tudor architectural idiom, creating a highly picturesque building with a dramatic roofline of tall Tudoresque chimneystacks, crenellated turrets and gabled projections that ranks as one of the finest buildings of its type in Ireland. Robertson was also an accomplished landscape architect, well-known for his work on the Italian gardens at Powerscourt, and he also carried out extensive landscaping at Carrigglas. The Lefroy family remained at Carriglass Manor until c. 2005, when they sold the estate and grounds.