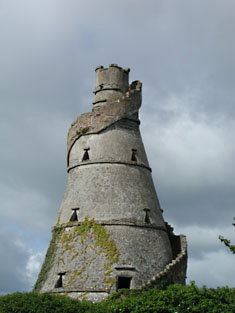 Attendant structures such as outbuildings and follies were an integral part of large and small demesnes. The Castletown estate has a selection of them, including the ‘Wonderful Barn’ (c. 1743), Barnhall, a corkscrew shaped grain store inspired by Indian rice stores. 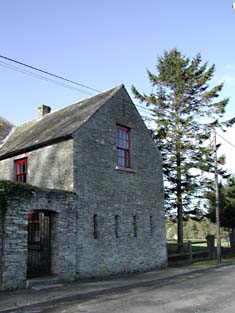 Not all eighteenth-century towns and villages were planned formally. Some followed the street patterns of existing settlements, while others were created by small religious communities, most notably the Quaker community at Ballitore to the south of county Kildare. Abraham Shackleton (n.d.), from Yorkshire, a member of the Religious Society of Friends (Quakers), founded a school in the area. While the school has since been demolished, a surviving rubble and red brick arch (1726) marks the original entrance to its boundary wall. A Meeting House (c. 1770) was built to the south of the village, L-shape in plan with rubble stone walls, originally rendered, and openings with granite sills and red brick dressings. Bounded by a high rubble stone wall with an arched gate, it remains a valuable architectural asset in the village. The community also opened a burial ground (c. 1745) on the old Carlow Road that contains simple headstones and is bounded by a rubble stone wall. As the century progressed, further building contributed to a more unified streetscape and reflected the increasing prosperity of Ballitore. The Market House (c. 1770) was erected on the square, apparently undergoing a subsequent change of use as evidenced by the alteration of its openings, and eventually embraced by ranges of buildings (c. 1800). Two modestly proportioned, three-bay houses (c. 1770) had already been built across the road while a terrace of five three-storey houses (c. 1780) was built between the Meeting House and the Square. The unrefined quality of these buildings indicates that they were not professionally designed or built for speculative purposes like those at Celbridge or Maynooth. While of neat appearance they are not as detailed, or grand, as houses in the larger estate towns. 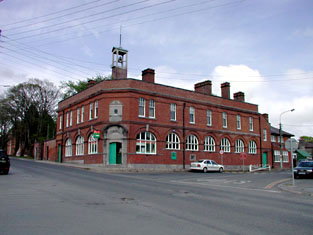 From 1870 to 1900, a grand-scale building project took place on the Curragh, as military barracks replaced a temporary camp of timber huts (c. 1855). The Barracks, now McDonagh Barracks (c. 1870), is one of four formally grouped identical red brick buildings dating from the earliest phase of the rebuilding. A hospital (c. 1885-6), together with reading and recreation rooms (c. 1886), continue the use of red brick with fine cut-stone and terracotta detailing. Typical of the Queen Anne Revival, which came to the fore in the 1880s, the hospital evokes a Classical composition with pedimented central bays echoed by projecting end pavilions. Red brick was the building material of choice for a range of buildings that completed the complex, including a range of artisan cottages and more grandiose military residences (all c. 1895), the latter incorporating tall Queen Anne Revival chimney stacks. The low, ground-hugging appearance of most buildings appeared to echo the horizontal nature of the surrounding Curragh plains, yet this flatness was relieved by a range of tower like structures that not only fulfilled a practical function but also added a welcome animation to the skyline. The four-stage red and yellow brick water tower (1894) incorporates a clock and is surmounted by a weather vane. The brick tower of the fire station (c. 1900) rises from a rusticated granite ground floor and appears to soar over its surroundings like an early Italian Renaissance tower house, an effect enhanced by the group of arched windows at the upper level. 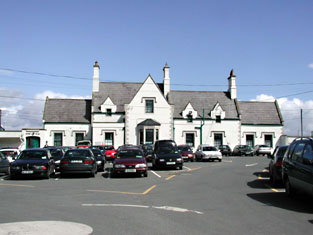 An extensive railway network was developed across Ireland over a period spanning the mid to late nineteenth century. In County Kildare, the railway lines supplemented transport routes such as the road network, developed in the eighteenth century, and the canal network, established at the beginning of the nineteenth century. Two primary railway lines served the county, linking large and small urban settlements with important trade centres, such as Dublin. The Mid Great Western Railway Line, opened in 1847, crossed the north of the county, linking Leixlip, Maynooth, Kilcock, and Carbury. The Great Southern and Western Railway line opened in 1846 and spanned the centre, east and west sides of the county. The primary route passed through Celbridge, Sallins, Newbridge, Kildare Town, and Monasterevin, while the line to the east incorporated stops at Naas and Harristown, and the line to the west of the county included Athy and Mageny. A number of railway lines were closed in the late twentieth century, although some were subsequently reopened as County Kildare prospered as a satellite settlement to the greater Dublin area – a station at Maynooth was closed in 1947, but was reopened in 1981. A collection of railway station buildings across the county, some still in use and some now accommodating an alternative purpose, survive as historic evidence of the coming of the railways to Kildare.