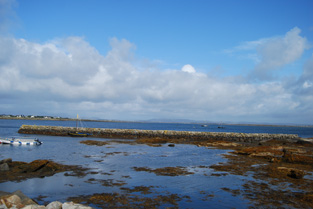 The coastline of Connemara is heavily indented with bays and estuaries, and islands such as Gorumna. Strongly maritime in outlook, the region was served by a large number of quays and piers. Occasional coastguard stations afforded coastal protection, as well as security and defence. Quays and piers are robustly constructed of the local granite and occur in a variety of shapes and sizes. The more closely spaced islands are linked by bridges and causeways, some of them impressive feats of building. The name of Alexander Nimmo, the noted engineer, is associated with many of these public works. 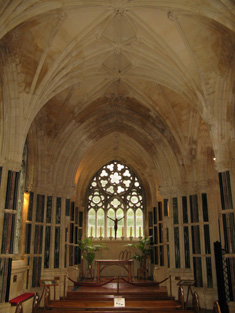 Standing close to the north shore of Pollacappul Lake, and with the backdrop of Mount Doughruagh is the remarkable mini-cathedral that is Kylemore Church. It was designed by James Franklin Fuller in 1877-81 for Mitchell Henry from Manchester, who built and resided at the famous Kylemore Abbey nearby. The church is one of the most accomplished buildings of the Gothic Revival in Ireland, displaying all of the architectural tricks and detailing of the style, seen especially in the multi-gabled side elevations, traceried windows and pinnacled tower. Stepped buttresses to the corners and between the nave windows, and the water spouts in the form of sculpted angels, emphasise the medieval antecedents of the style. The very finely detailed exterior is trumped by a glorious interior of sumptuous stained-glass windows and carved sedilias separated by multi-coloured clustered colonettes and superbly fashioned vaulted ceilings. 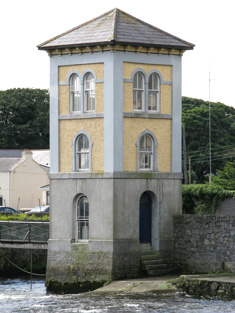 The thunderous din of the River Corrib, as it roars through the centre of Galway, is surely one of the most evocative sounds in any Irish city. A wide river, it is spanned by the impressive Salmon Weir and William O’Brien bridges. Umpteen mill races feed into the river and these once served a host of cloth and flour mills, distilleries and breweries. The elegantly curving Eglinton Canal runs alongside the Corrib and terminates at its own basin at the end of its circuit at the historic Claddagh. Nimmo’s Pier, named after the famous engineer, Alexander Nimmo, was erected at The Claddagh c.1830. The sides of the Corrib are, for the most part, enclosed by stoutly built granite walls of c.1750, topped by mooring posts of stone and iron, the water being reached by stone steps. Buildings associated with the river include the fisheries board office of 1899 with its plaque commemorating the Galway Fisheries founded in 1669, the salmon watchtower of c.1870 and the National Piscatory School of 1846. 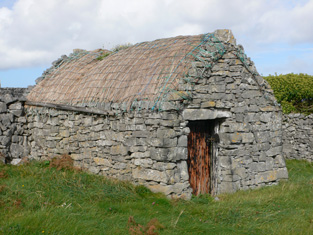 Vernacular architecture is an important part of the built heritage of West Galway. The thatched house, particularly associated in tourist literature with the Aran Islands, is iconic. While the islands and indeed the mainland have a large number of thatched houses, a notable part of this heritage is the thatched farm building. There are a few on the mainland, but the islands have a large number, Árainn (Inis Mór) having three, Inis Meáin fifteen and Inis Oírr two. They are all simple rectangular single-space structures with pitched thatched roofs and rubble limestone walls and having an entrance doorway in a long wall or sometimes in a gable. There are groups on Inis Meáin in particular which form an important and distinctive part of the Aran landscape.