Building of the Month - September 2017 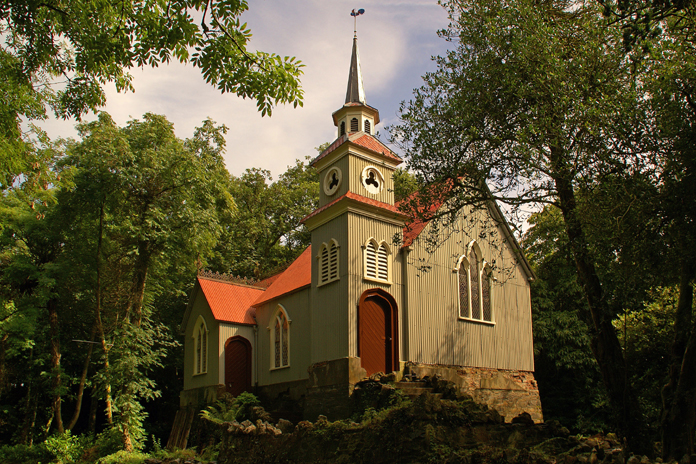 Laragh, County Monaghan, can claim an industrial heritage dating back to the eighteenth century. The local topography encouraged industrial speculation on two counts. The soil, in addition to the usual crops of oats and wheat, was suitable for the cultivation of flax. Meanwhile, according to Samuel Lewis (1837), the elevated Lough Egish boasted a stream ‘present[ing] by its rapid fall and constant supply…such favourable sites for bleaching-mills that not less than fourteen mills are situated on its short course… [The] lake is under the care of an engineer, or waterman, to regulate the flow of the water, so that a deficiency is seldom experienced even in the driest seasons’. When County Monaghan was first mapped by the Ordnance Survey the neighbouring townlands of Cornacarrow and Laragh included three beetling mills: Cherry Vale Mill, Helenvale Mill and Laragh Mills. The latter, leased by Messrs. Davidson in 1824 and reworked as the first mechanised spinning mill in Ulster the following year, was described by Lewis as ‘a weaving factory and bleach-green affording employment to more than 300 persons’.

The complex was a draw for labourers, spinners and weavers, particularly in the period of the Great Famine (1845-9) and its aftermath, and a model village of sorts was developed which, while not on the scale of Portlaw or Sion Mills, nevertheless included two terraces of workers’ houses on either side of a post office. Crucially, the village did not include a public house as the new proprietor of the mills, James McKean (d. 1908), was a promoter of the temperance movement and encouraged abstinence from alcohol. McKean was not always blessed with a compliant workforce, however, and surviving letters written to the Bishop of Clogher express his frustrations with his men socialising at a nearby establishment run by Mrs. Coleman and arriving to work drunk and prone to brawling and fighting. Relations between employer and employee reached an all-time low in the Winter of 1884 when the workers went on strike over pay and working conditions including a dispute over time off for the observation of Holy Days of Obligation. McKean countered with a “lockout” which lasted until the Spring of the following year. McKean had the option of drafting in men from other mills he owned but as those workers were also primarily Catholic he could not risk the strike spreading across his entire business empire. Instead McKean courted the primarily Protestant workforce based in Rockcorry, but to no avail, and this may have inspired the construction of a church which, following the demolition of the mills and most of the workers’ houses, survives as the enduring legacy of the industrialisation of Laragh.

Otherwise a conventional composition, the church includes a nave lit by Georgian Gothic windows and a chancel lit by a geometric East Window. A slender tower, the feature most often quoted as the pinnacle of the “Swiss Gothic” theme, shows three distinct tiers with repoussé fish scale roofs and a weathercock-topped spire. The church stands on an elevated platform given a “mini Alpine” treatment with fern- and moss-covered rocks and stones heaped in picturesque mounds.

Deconsecrated in 1962, and having fallen prey to neglect and vandalism, Saint Peter’s Church was in poor repair when recorded by the National Inventory of Architectural Heritage. The interior had been particularly affected and the floors on either side of the central aisle had been lost, some of the windows were broken and had allowed ivy to encroach on the timber boarded walls, the pulpit was in pieces, and sections of the timber boarded ceiling had fallen revealing the underside of the corrugated-iron roof.

Laragh Heritage Group was formed in 2012 with the objective of restoring the church and, having made a successful application for funding under the Built Heritage Jobs Leverage Scheme, progress was swift allowing the church to be officially reopened on the 13th September 2014. The restoration of Saint Peter’s Church is an ongoing project and in 2016 the lattice windows were repaired and the arcaded pulpit was reassembled on its rocky plinth. Laragh Heritage Group recently received further funding under the Built Heritage Investment Scheme 2017 for the repair of the rainwater goods.