Building of the Month - November 2018

Limerick, like many cities and towns across Ireland, can boast an array of memorials and monuments celebrating key events and figures in its history.  The Treaty Stone (1865), originally standing on the corner of Thomond Bridge and later moved down Clancy’s Strand, commemorates the signing of the Treaty of Limerick on the 3rd October 1691 which brought to an end the conflict between the Jacobites and the supporters of William of Orange.  The Sarsfield Memorial (1881) was erected on Nicholas Street [Cathedral Place] to remember Patrick Sarsfield (c.1660-93) ‘the heroic defender of Limerick during the sieges of 1690 and 1691 [who] died from the effects of wounds received at the Battle of Landen 1693’.  A Triumphal Column (1826-6) standing in the centre of Pery Square, a private park shared exclusively by key holders of houses speculatively built by the Pery Square Tontine Company, celebrates Thomas Spring Rice MP (1790-1866) who endeared himself to the people of Limerick for his work in parliament to achieve Catholic Emancipation.  A Triumphal Arch (1876), doubling as a memorial to Richard Russell (1803-71) of Plassy, was placed at the entrance to Pery Square when it was relandscaped and reopened to the general public as a peoples’ park.

The siting of monuments could often be contentious and the O’Connell Monument (1856-7), Richmond Place [The Crescent], occupies a position originally earmarked for a monument to Viscount John Charles Henry Fitzgibbon (1829-54) of Mountshannon House who was fatally injured at the Battle of Balaclava (25th October 1854) during the Crimea War (1853-6).  The Richmond Place site proved politically divisive and the Fitzgibbon Monument was ultimately erected in 1857 on Wellesley Bridge [Sarsfield Bridge].  Following several attempts at its destruction the monument was dynamited on the 9th June 1930 leaving only its podium intact.  The cast-iron railed enclosure was retained when a replacement monument commemorating the 1916 Rising was erected in 1954.

The number of Limerick casualties from the First World War (1914-8) has been estimated at 3,000 but, in the absence of a public memorial, individuals were remembered by plaques commissioned by grieving family members or, collectively as parishioners, in so-called “Roll of Honour” monuments including the Thomond Monument (1922) in Saint Mary’s Cathedral.

In the summer of 1928 a delegation from the Legion Club went before the Limerick Corporation Improvement Committee to make the case for a public memorial.  The Limerick Leader (9th June 1928) reported that ‘A movement is afoot to erect a memorial in Limerick to the three thousand Limerick men who fell in the Great War.  The Limerick branch of the British Legion have the project in hands and are already engaged in selecting a site in the city for the proposed memorial [and have asked] permission to erect the memorial at Pery Square’.  Echoing the controversy around the Fitzgibbon Monument the delegation, in addition to supplying the City Surveyor with detailed plans, were asked to secure an alternative site if possible.  The idea of a war memorial was not unanimously welcomed by the Corporation and the report continues ‘Ald. O’Flynn proposed, and Mr. J.J. McNamara, seconded, that leave be given to erect the memorial in Pery Square.  Mr. Doyle thought that a site should be found for the memorial in the park or in some other part of the city besides Pery Square…  Mr. Gilligan seconded, and said that he was opposing the application on national grounds.  On a division the proposition was carried by a huge majority, only four members voting for the amendment, Councillors Doyle, Barry, T. McNamara and O’Callaghan.  Mr. O’Callaghan – “They can erect it if they like, but it will come down”‘. 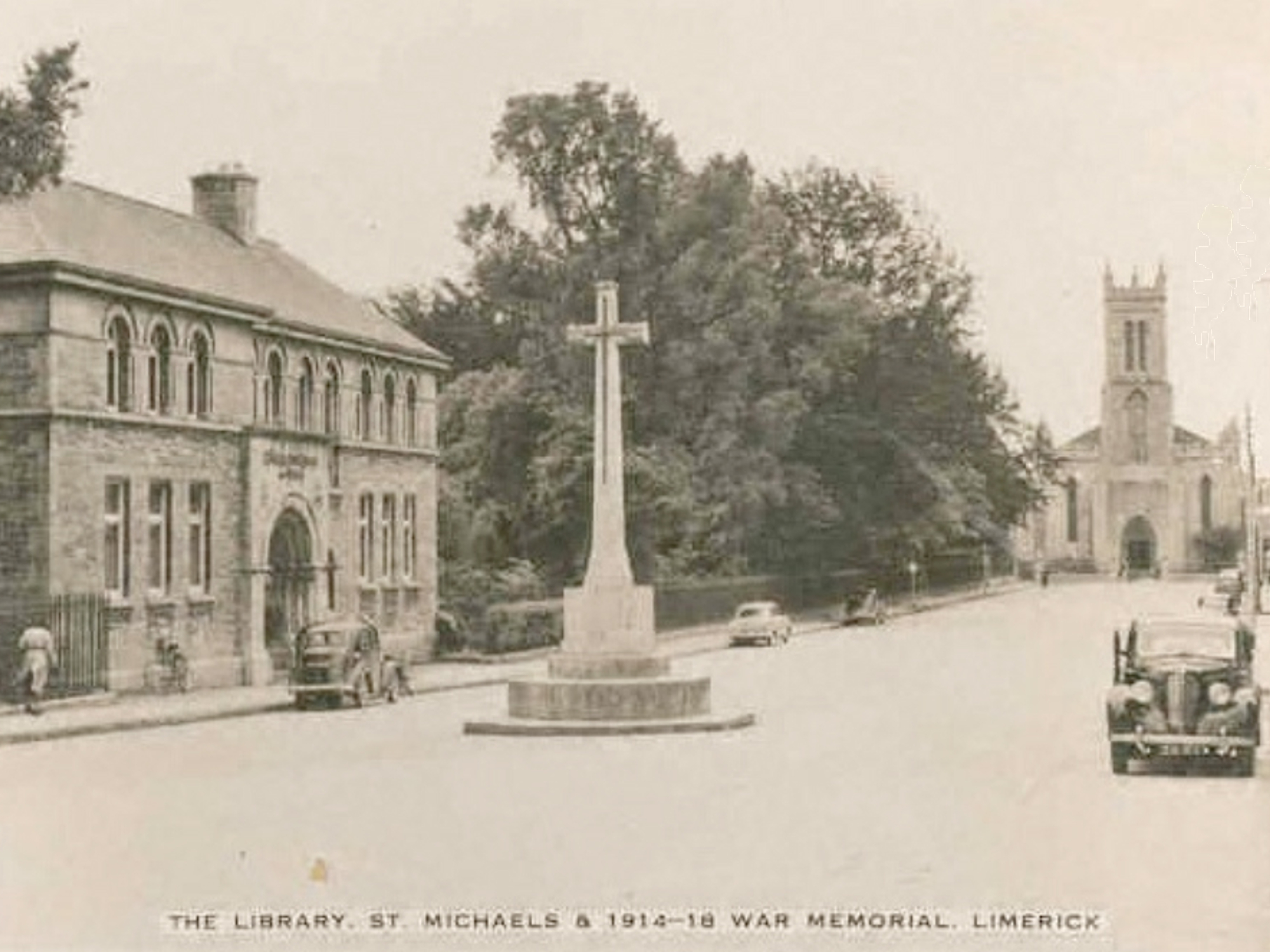 With the site secured fundraising began in earnest and advertisements were placed in local papers seeking subscriptions including one in Limerick Chronicle (12th October 1929) where the Legion Club described the proposed memorial as taking ‘the form of the “Cross of Sacrifice” which stands in nearly every War Graves Cemetery throughout the World.  A Roll of Honour will be compiled in a bound volume, giving name, rank, unit, where killed, and date…  The Subscription List is now open, and donations, no matter how small, will be gratefully received’.  By early November almost £360 of the total £550 cost had been raised.  By December the deficit amounted to just over £80.

On Sunday 10th November 1929, following two separate ceremonies in Saint John’s Cathedral and Saint Mary’s Cathedral, a procession of ex-servicemen made its way to Pery Square accompanied by the Sarsfield Fife and Drum Band to witness the unveiling of the Limerick War Memorial.  After a sounding of The Last Post, followed by two minutes silence, the memorial, draped in a purple cloak, was unveiled by Major-General Sir William Bernard Hickie (1865-1950), President of the Area Council (Southern Ireland) of the British Legion, who orated:

“It is most fitting that this ancient city should have within its boundaries a monument which will not only stand to the glorious memory of those of her gallant sons who gave their lives in the cause of freedom and justice in the Great War, but will also serve to remind everyone, both citizens and visitors alike, of the great number of men from the County of Limerick, and from this its capital city, who took a distinguished part in the campaign of the Great War, and of the exemplary and gallant manner in which they carried out their self imposed duties…  What we want most in Ireland to-day is that brotherly spirit which will recognise that we are all Irishmen of one great family, who are striving according to our lights, to do our best for the country which we love.  Opinions and methods may differ, but nothing is to be gained by unkind criticism, by harsh words, or by wilful misunderstanding.  Limerick has always set an example of that broadmindedness and of that kindly spirit which are also, so noticeably absent at times from our public life.  This monument has been erected to three thousand Limerick men who fell in the Great War, as I have said, in the cause of right and justice”. 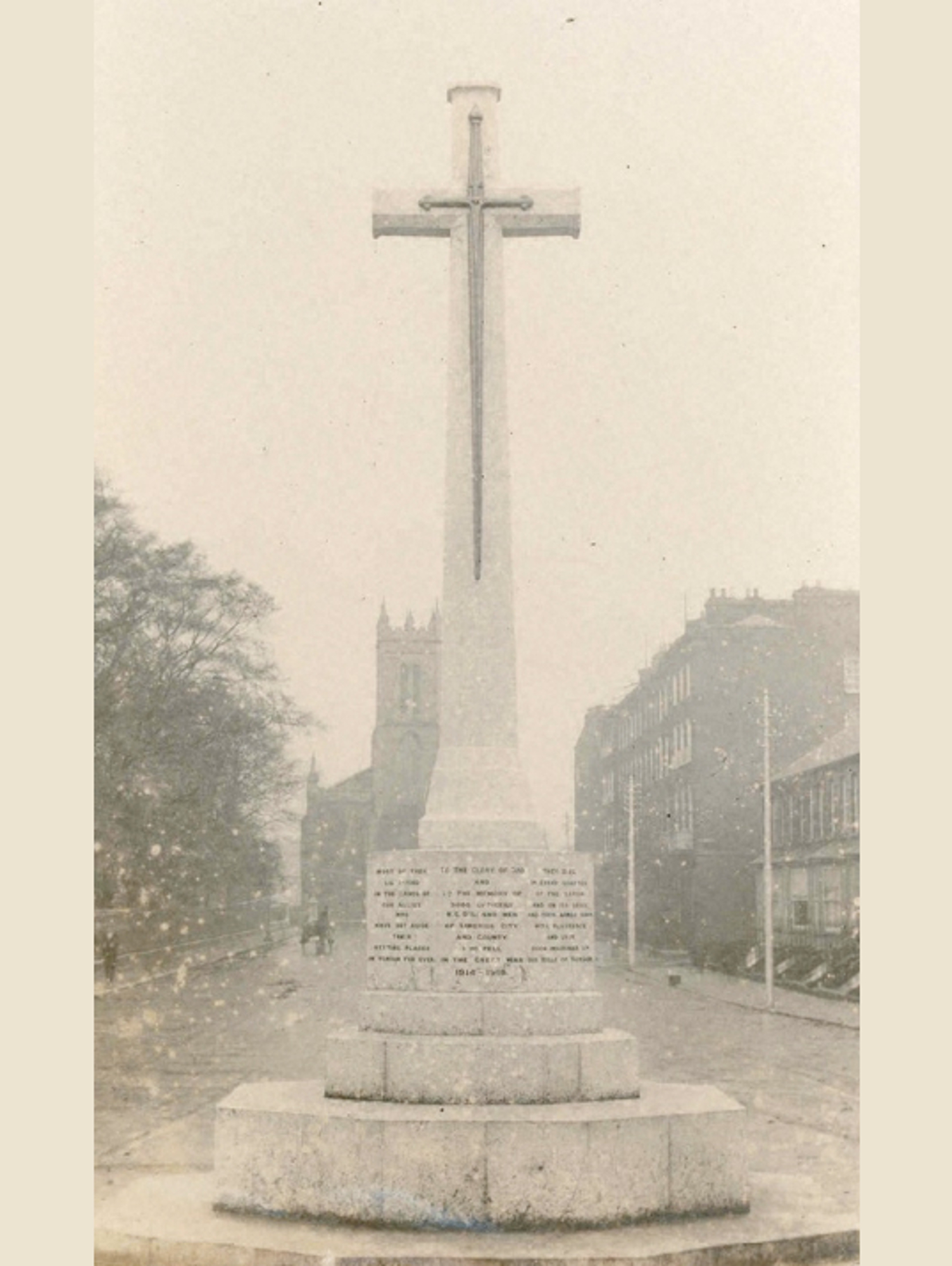 As the crowds dissipated the memorial was revealed as a facsimile of the “Cross of Sacrifice” designed in 1918 by Sir Reginald Blomfield (1856-1942) for the Imperial War Graves Commission.  An octagonal cross of glimmering white granite, twenty feet high and embedded with a bronze longsword, stood on an octagonal plinth inscribed on its centre:

TO THE GLORY OF GOD

TO THE MEMORY OF

IN THE GREAT WAR

Panels on either side carried the inscriptions:

IN THE LANDS OF

IN HONOUR FOR EVER

AND ON ITS SEAS

AND THEIR NAMES HAVE

OUR ROLLS OF HONOUR

Councillor O’Callaghan’s prediction came true in August 1957 and a front page article in Limerick Leader (17th August 1957) reported that ‘An explosion heard over a wide area of the city about 2.50 o’clock this morning, destroyed the War Memorial, erected in Pery Square about 30 years ago by the Limerick Branch of the British Legion.  Some people in the vicinity were thrown from their beds by the force of the blast…  The cross, shattered by the blast thought to have been caused by a stick of gelignite, was strewn around the severely damaged plinth.  In between were portions of the fuse that had been attached to the explosive material.  Several windows of buildings in the vicinity were broken by the force of the impact.  Window even in Mallow Street were smashed.  People in the locality dashed from their beds and on to the streets in their night attire.  Most of them thought an aeroplane had crashed nearby’.  A contemporary photograph shows the destroyed memorial with the longsword, bent out of shape, resting on shattered sections of the cross.  An initial claim by the Legion for £3,000 in compensation was reduced to £535 and, challenged by the Corporation, was paid by order of the court.A later inscription was added to the memorial to remember the men of Limerick who were lost in the Second World War (1939-45). 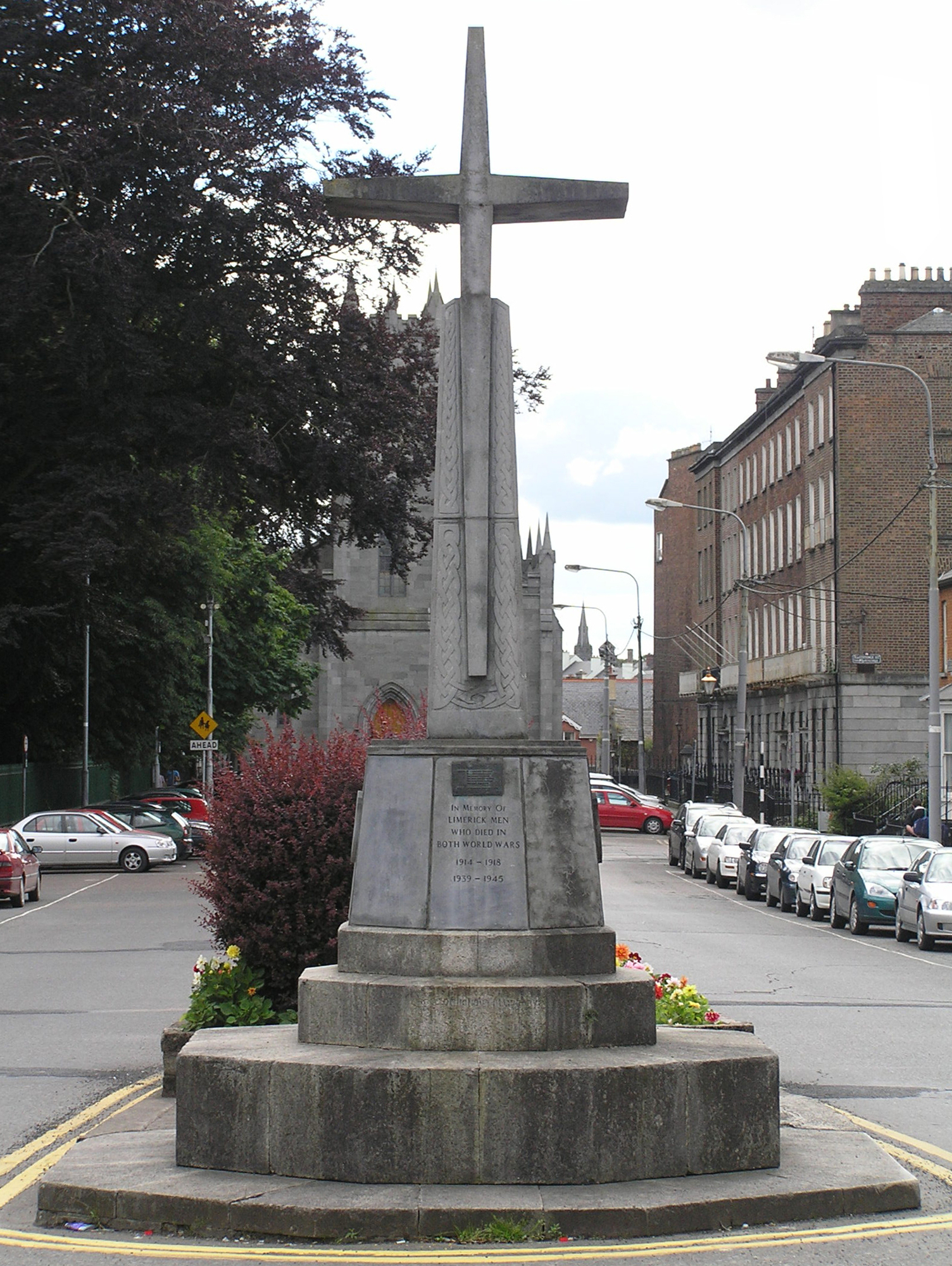 A replacement memorial, erected on the surviving stepped base, was designed in 1960 by Ronald “Ronnie” J. Hickey (d. 2015) of Cratloe in County Clare.  The new Limerick War Memorial, a stylised reinterpretation of the earlier “Cross of Sacrifice”, superimposes a streamlined cross on a tapering shaft where low-relief Celtic strapwork alludes to the Early Christian Irish High Cross.  A battered octagonal pedestal, clad in limestone panels, carries two inscribed shields and a much simplified dedication: 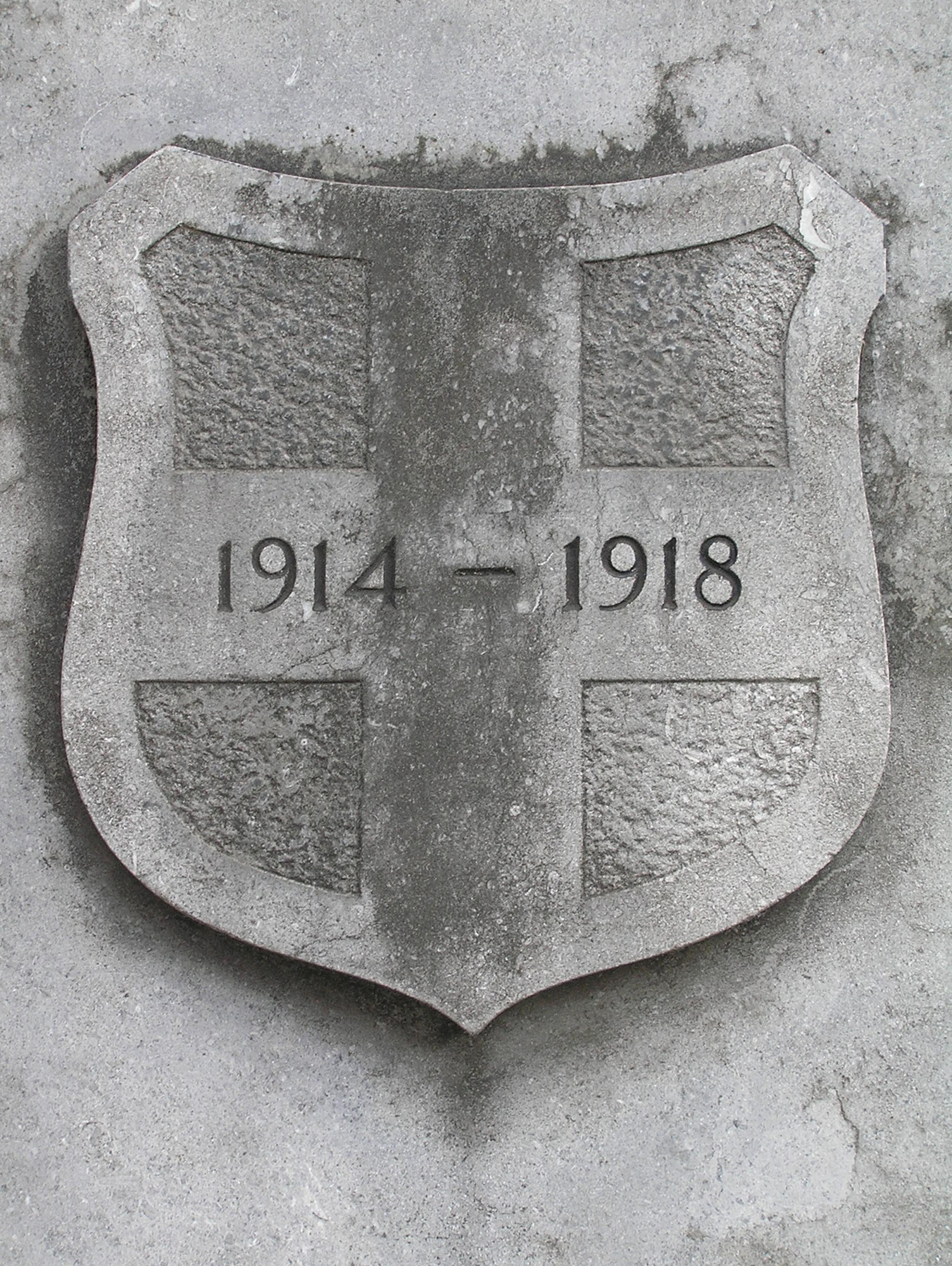