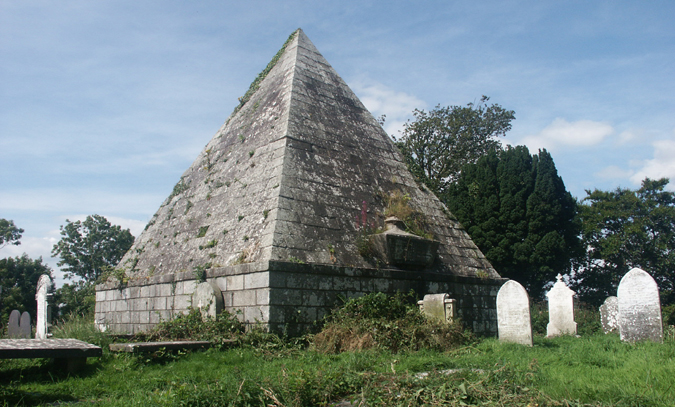 Described by Sir John Betjeman (1906-84) as the largest pyramid tomb ‘beyond the banks of the Nile’, the Howard Mausoleum introduces a flavour of ancient Egypt to a typically Irish pastoral setting in the outskirts of Arklow.  Erected in 1785 on a corner of the Shelton Abbey estate as a burial place for Ralph Howard (1726-86), first Viscount Wicklow, the mausoleum occupies the site of the medieval Kilbride church and is attributed to Simon Vierpyl (c.1725-1810), an English sculptor and stonecutter introduced to Ireland by James Caulfeild (1728-99), fourth Viscount Charlemont: prior to this move Vierpyl spent nine years in Rome making copies of antique sculpture for Grand Tourists.  Described in 2001 as a valuable piece of heritage at risk of being lost through neglect and decay, the pyramid was adopted as a project by the Arklow Marine and Heritage Committee who, in partnership with TÚS, have begun a careful restoration of the mausoleum.

Back to Places to Visit: Wicklow