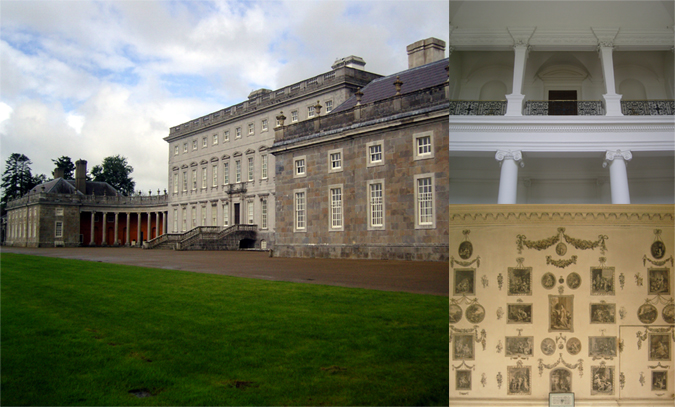 Castletown is Ireland’s first and finest eighteenth-century neo-Palladian country house.  Erected (1722-9) for William Conolly (1662-1729), Speaker of the Irish House of Commons, the façade of Ardbraccan limestone was designed by the Florentine architect Alessandro Galilei (1691-1737).  Edward Lovett Pearce (d. 1733), later the architect of the Houses of Parliament in Dublin, seems to have been responsible for the interior layout of the house and his additions of Ionic colonnades and wings would influence the design of many eighteenth-century Irish country houses.  Lady Louisa Conolly (1743-1821), arriving at Castletown in 1759, transformed the interior of the house, remodelling the dining room, the drawing rooms, the long gallery and the grand staircase.  Rescued from near-dereliction by Desmond Guinness, and restored by the Irish Georgian Society, Castletown in 1967 became the first house in Leinster open to the public.  Managed by the Office of Public Works since 1994, a restoration of Castletown and its parkland is ongoing.

Back to Places to Visit: Kildare