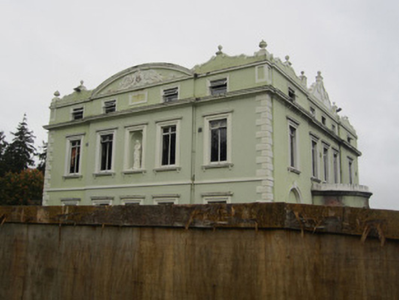 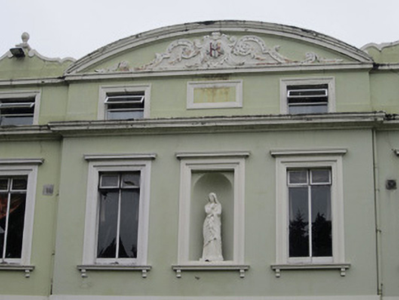 Known also as Blayney Castle after the plantation castle nearby (from which the town gets its name), Hope Castle was built by Andrew Thomas, eleventh Lord Blayney who ran the associated estate from 1784 to his death in 1832. Originally a five-bay three-storey Georgian block, the house received many embellishments during the Victorian era, including scrolled cresting on the roof parapets and at one stage an ornamental cast-iron and glass porch canopy. The present country house is notable for the different treatments of the principal elevations, enhanced by the various recesses and projections, and embellished by the wide variety of render details. Its associated walled garden, stable block, entrance gates, gate lodges and other features make this one of the most intact of Monaghan's demesnes. The subsequent history of the house and demesne is particularly varied, having been sold in 1853 to the Hope family after whom the famous Hope Diamond is named, later occupied by Queen Victoria's son, the Duke of Connaught. The British Army had a barracks there later, it functioned as Monaghan County Hospital from 1932-7, then as a Franciscan convent from 1943–74. A period of dereliction followed until it was taken over the local council in the 1980s. Nineteenth-century additions to the garden and main fronts were demolished during works at this time. One interesting internal feature – a Soanesque top-lit upper stair landing was destroyed during the phase of dereliction. Recent use as a hotel and leisure complex were short-lived and the site has remained derelict since an arson attack in 2010.