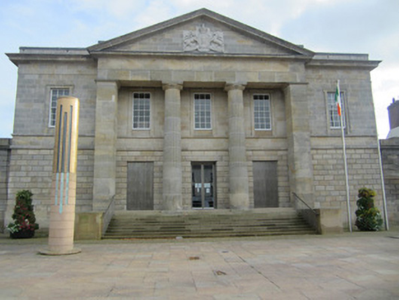 Monaghan Courthouse is one of the largest and most impressive in Ireland and forms one of the key public buildings in the town centre. Having undergone recent restorations, which have served to emphasise its fine architectural qualities, it is now resplendent in the townscape. The quality of its masonry work and architectural design are evident. Inspired by the widely popular use of Classical architecture in prestigious public buildings, the design in its simple use of architectural components such as pediment, fluted Doric columns, rustication and heraldry, demonstrates the Victorian appetite for designs drawn from the ancients, in order to convey establishment and solidity within the society it governed. Today this imperial building remains in use as a law court and stands imposingly in the townscape of Monaghan.