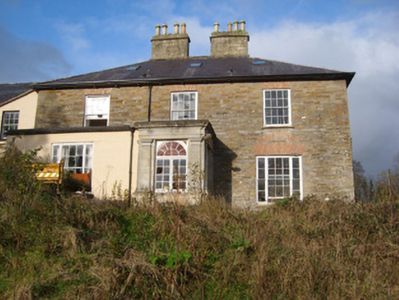 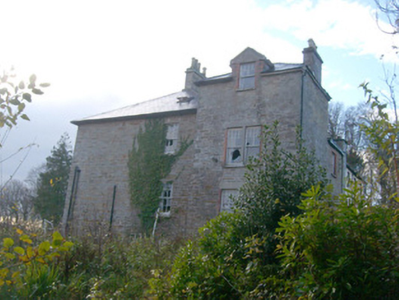 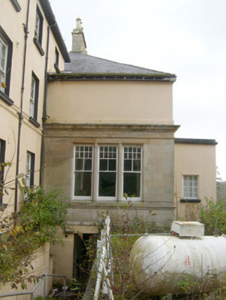 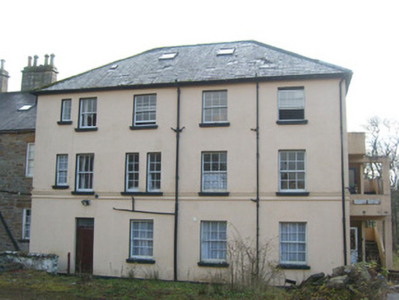 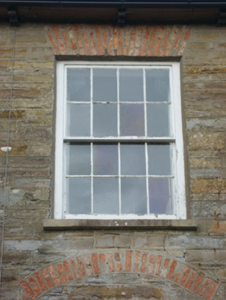 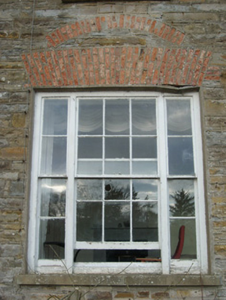 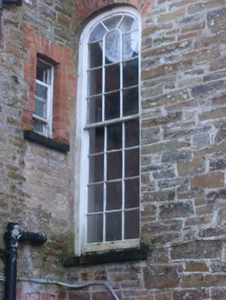 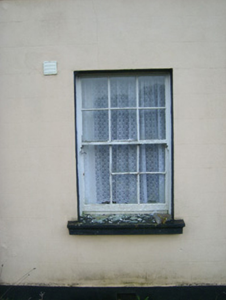 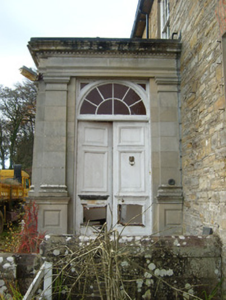 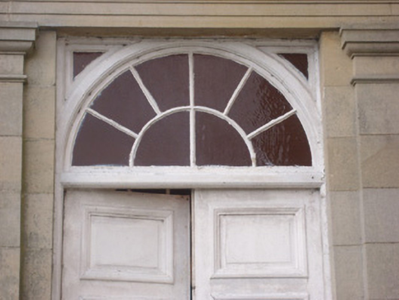 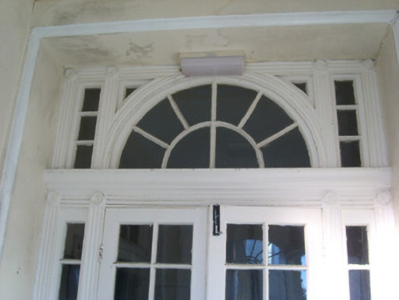 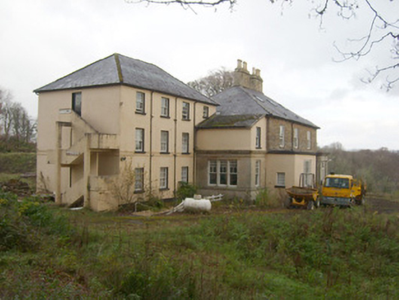 Detached three-bay two-storey over basement former country house, built c. 1840 and extended c. 1890 and c. 1910, having central projecting single-bay single-storey porch to the front elevation (south), single-bay single-storey addition to the west elevation having later addition over, two-storey over basement with dormer attic level return to the rear (north) at the east corner (added c. 1890), and with central projecting stair return to the rear elevation (north). Later in use as a hotel with large multiple-bay three-storey over basement with attic level addition added to the west elevation and single-storey flat-roofed extension added to the west side of main entrance porch, c. 1910. External flight of concrete steps to the west elevation of three-storey return. Later in use as a retirement home, now out of use. Hipped natural slate roof having slightly overhanging eaves with timber brackets, a central pair of ashlar chimneystacks aligned parallel to roof ridge having ashlar stringcourses and terracotta pots over, iron rooflights, and some surviving sections of cast-iron rainwater goods. Hipped natural slate roof to rear return having ashlar chimneystacks, projecting cut stone eaves course, and with gable-fronted half-dormer opening to the east elevation; hipped natural slate roof to stair return to rear. Flat roof to porch having moulded cornice at eaves level. Hipped natural slate roof to c. 1910 extension. Squared and randomly coursed rubble sandstone construction, probably originally rendered. Ashlar sandstone construction to porch having ashlar pilasters to the corners over moulded pedestals having moulded sill course/cornice, and with entablature over having dentil course/cornice. Ashlar sandstone construction to single-storey addition to the west elevation having moulded ashlar sandstone sill course and sandstone entablature over with dentil course/cornice. Rubble stone and squared rubble stone construction to return to the north-east corner. Smooth rendered ruled-and-lined finish to later extensions, c. 1910. Square-headed window openings to main block having red brick voussoirs over, stone sills, and with eight-over-eight pane timber sliding sash windows at first floor level and tripartite/Wyatt-style windows at ground floor level to front elevation having central six-over-six pane timber sliding sash window flanked by two-over-two pane windows. Round-headed window opening to front face of porch having two eight-pane timber casement windows with round-headed spoke fanlight over with coloured glass panels. Round-headed window opening to stair hall return (north) having twelve-over-twelve pane timber sliding sash window. Square-headed window openings to the east elevation of rear return having ten-over-one pane timber sliding sash windows. Variety of timber sliding sash windows to c. 1910 extensions. Square-headed doorway to the east face of porch having timber panelled double-doors with round-headed spoke fanlight over with coloured glass panels. Square-headed doorway to interior of porch having glazed timber double-doors with sidelights and round-headed fanlight over with sidelights. Stone threshold to entrance with ashlar sandstone boundary wall having chamfered ashlar coping over to east side over basement. Set back from road in extensive mature grounds to the south of Inver and to the west of Mountcharles. House overlooks Inver Bay a short distance to the south. Former complex of walled gardens to the north (see 440909221) and gateway to the north-west (see 40909243). Fragmentary remains of former outbuildings to the north and north-west. Former entrance and approach avenue to the north, now closed. Converted and heavily-altered gate lodge to entrance. Well-maintained ornamental pond to the east formerly with house but now in separate ownership.

Now sadly out of use, this substantial and well-proportioned house/country house retains much of its early character. Although greatly extended over the years to accommodate new uses, the original form of this house is still easily discernable. Its visual expression and integrity is enhanced by the retention of much of its salient fabric, including a variety of timber sliding sash windows and natural slate roofs, which creates a pleasing patina of age and adds to its visual expression. Although not depicted on the 1837 Ordnance Survey first edition six-inch map of the area, the form and detailing of the original building (having Wyatt windows etc.) is of a style common during the first decades of the nineteenth century. The original building is a characteristic example of the middle-sized three-bay two-storey houses with central doorway that were constructed throughout Ireland from the mid-eighteenth century and throughout the nineteenth century by gentleman and prosperous clergy. The style of the stonework to the original block suggests that it was originally rendered. The lavishly-detailed classical entrance porch, and the formerly single-storey block adjoining the west end of the original building, is constructed using high-quality sandstone masonry and is clearly the work of skilled craftsmen. This feature provides an attractive central focus and adds artistic interest to this otherwise plain but well-proportioned house. This building was extended to the rear at the north-east corner sometime during the last decades of the nineteenth century, the style of the window openings to the east side of this extension suggests that these were added c. 1890 or 1900, possibly to accommodate new use as a hotel (in use as the ‘Drumbeg Hotel’ c. 1900). This building was later greatly extended to the west sometime during the first decades of the twentieth century, and these extensions somewhat overpower the architectural expression of the original building. This fine house was apparently built for a Capt. Stewart, c. 1840, and replaced an earlier house to site, which was is existence in 1777 – 83 when it was the home of a Revd. James Montgomery (Taylor and Skinner map). This house was later the home of a Mrs. Montgomery in 1824 (Pigot’s Directory), and a William Sinclair in 1857 (Griffith’s Valuation; appears to have been in the ownership of the Marquis Conyngham of The Hall, Mountcharles at this time), and a William Sinclair (J.P.) in 1881. It may have been converted to a hotel by 1894 (not in Slater’s Directory of this year). This building remained a hotel into the mid-twentieth century and was subsequently in use as a children’s home, and then as a nursing/retirement home. Occupying attractive mature grounds overlooking Inver Bay to the south, this notable if extended house is an integral element of the built heritage of the local area. It forms the centrepiece of a group to related sites along with the walled garden to the north (40909221) and the gateway to the north-west (see 40909243).