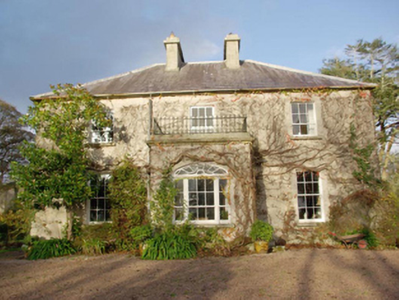 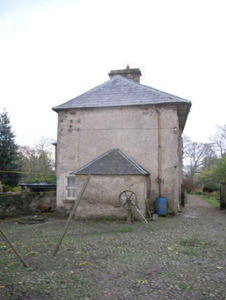 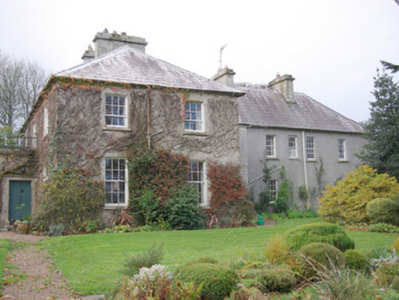 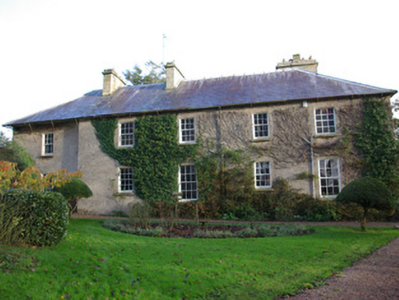 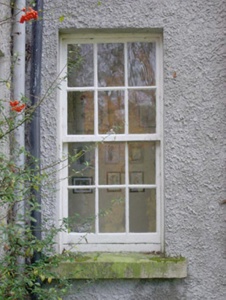 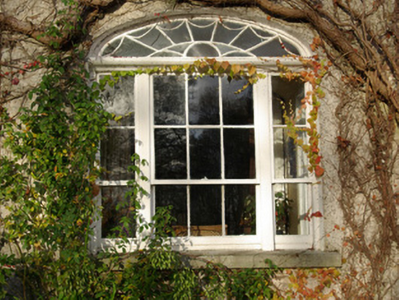 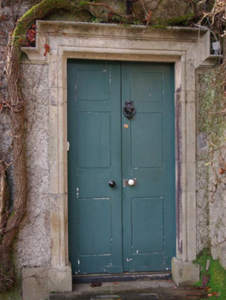 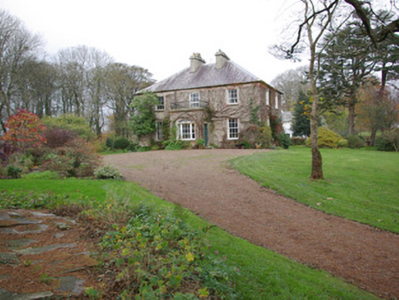 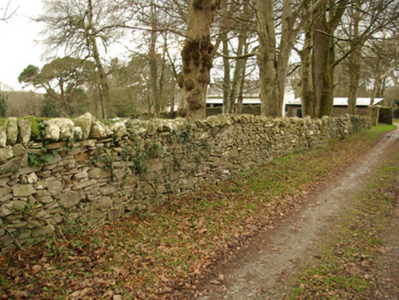 Detached three-bay two-storey house, built c. 1760 and altered c. 1830, having central projecting single-bay porch to the front elevation (south) and with large two-storey return to the rear (north). Single-bay single-storey entrance porch to the north end of rear return. Now also in use as a guest house. Hipped natural slate roofs with projecting cut stone eaves course, cast-iron rainwater goods, and with a central pair of ashlar limestone chimneystacks having cut stone coping over. Pair of ashlar limestone chimneystacks to the rear return. Flat roof to porch having moulded cornice and decorative cast-iron railings/balustrade over. Mono-pitched slate roof to the porch to the north. Rough cast rendered walls. Square-headed window openings with stone sills and having six-over-six-pane timber sliding sash windows to the ground floor and six-over-three pane timber sliding sash windows at first floor level to the main block. Tripartite/Wyatt-style timber sliding sash window to the front face of porch having segmental-headed spider’s web fanlight over. Square-headed doorway to the east face of porch having moulded cut stone surround, stone plinth blocks to base, cut stone hoodmoulding over, and with timber double doors. Set back from road in extensive mature landscaped grounds overlooking Bruckless Harbour and McSwyne’s Bay to the south. Gravel forecourt to the south and gardens to site. Complex of outbuildings to the rear (see 409098041), gateway (see 40909838) and gate lodge (see 40909838) to the north, and walled gardens (see 409098040) to the west and the south. Rubble stone boundary walls to site; dry stone walls along some approach avenues. Long winding approach road to house from the gateway to the north.

This well-proportioned Georgian house retains its early character and form. Its visual expression and architectural integrity is enhanced by the retention of its early fabric including timber sliding sash windows and natural slate roofs. The good quality cut stone chimneystacks add interest at roofscape level. Artistic interest is added by the good quality cut stone surround with hoodmoulding over to the doorway, perhaps a later addition c. 1830, and by the good-quality cut stone moulding and the intricate cast-iron railings over the porch, and by the delicate spider’s web fanlight over the Wyatt-style window to the front of the porch. The front elevation of this appealing building represents a classic example of the language of classical architecture stripped to its barest fundamental elements, which creates a fine dwelling in a subtle style. The three-bay two-storey form is characteristic and many middle-sized middle-class gentleman’s residences, dating from the eighteenth and nineteenth centuries, that can be found throughout Ireland. The front elevation of this house is of early nineteenth-century appearance, although this house apparently dates to the mid-eighteenth century. It is possible given the style and proportions of the return to the rear, particularly to the east elevation, that this is an earlier house with a later block added to the south. This fine house was reputedly originally built by the Nesbitt family, a Scottish family that originally arrived in Donegal as part of the Plantation during the early decades of the seventeenth century, c. 1760. However, it is indicated on the Taylor and Skinner map of 1777 - 1783 as a ‘Ballymacdonel’, occupied by a McDowdall. It later passed into the ownership of the Cassidy family (apparently bought by a Samuel Cassidy in 1795), a prominent merchant family also involved in the tanning industry, who owned the house and lands throughout the nineteenth century. It was the home of an Andrew Cassidy in 1846 and a Samuel Cassidy in 1881 and 1894 (all Slater’s Directory). It was later sold by Samuel’s son, Andrew, in 1902 to Thomas Kelly Grene who in turn passed it to his nephew Arthur Warren Darley. According to local tradition, Darley supported the nationalist cause in the War of Independence and a number of republican leaders were sheltered at Bruckless House. Darley sold the House to Thomas Roderick Fforde, a retired Royal Navy Commander, and it remained in the ownership of the Fforde family up until the 1950s. This fine building forms the centrepiece of a collection of related sites along with the complex of outbuildings to the rear (see 409098041), gateway (see 40909838) and gate lodge (see 40909838) to the north, and walled gardens (see 409098040) to the west. The rubble stone and dry stone walls to site add to the setting and complex. Situated in attractive mature landscaped grounds with well-maintained gardens, this building is an important element of the built heritage of the local area.