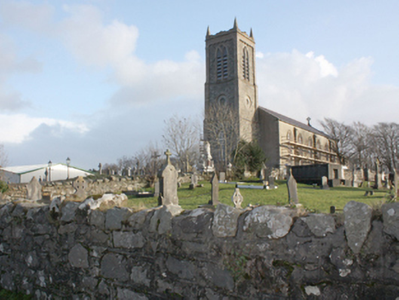 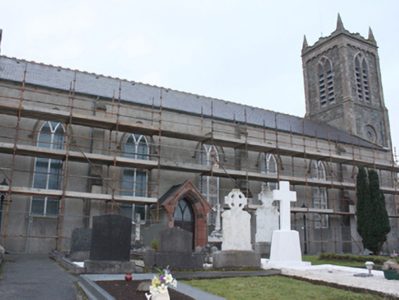 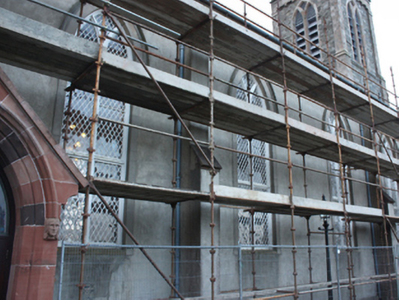 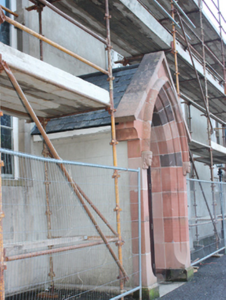 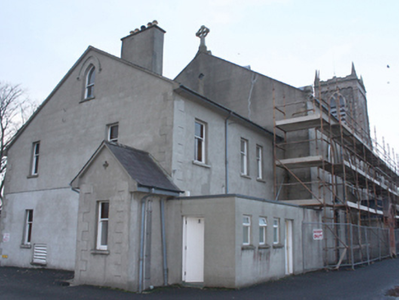 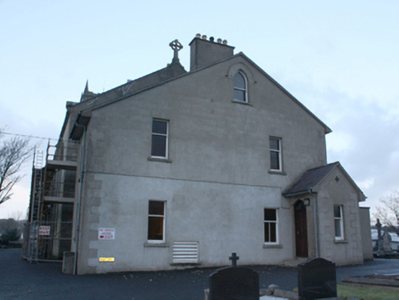 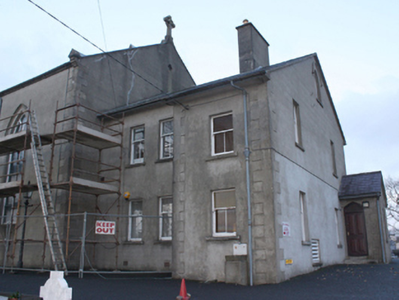 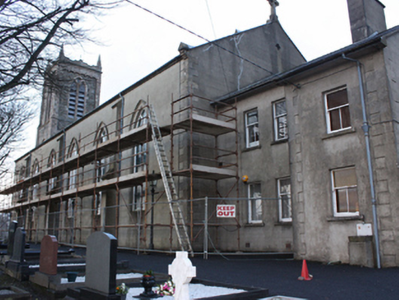 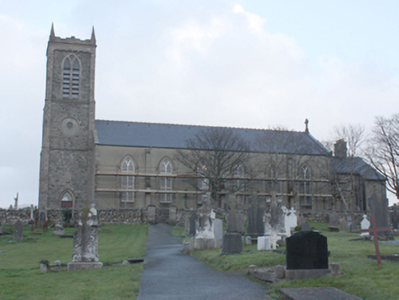 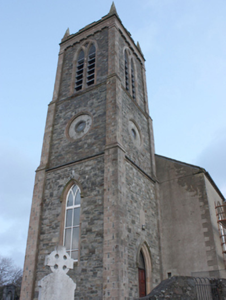 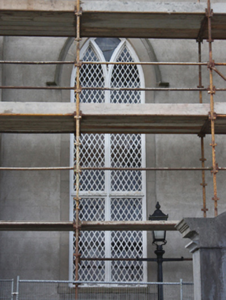 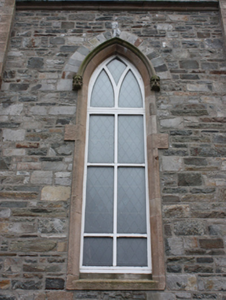 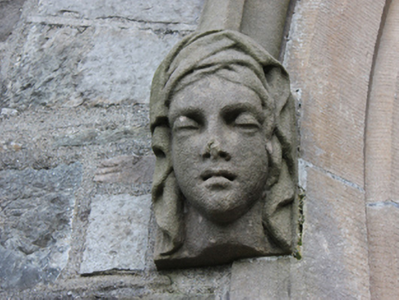 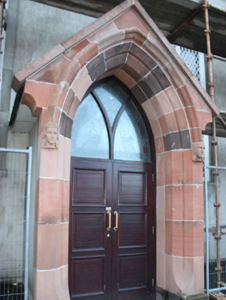 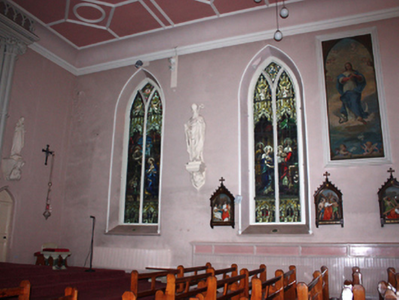 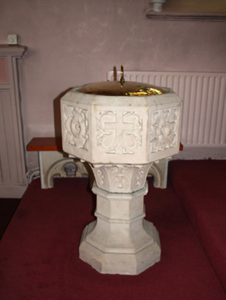 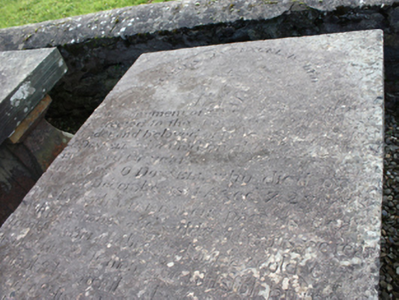 Freestanding double-height Catholic church, built c. 1848, comprising six-bay nave with shallow chancel to the south-east, three-stage belltower (on square-plan) to the north-west gable having corner pinnacles at parapet level, gable-fronted single-bay single-storey entrance porch to the north-east elevation, and with three-bay two-storey with attic level sacristy attached to the chancel gable (south-east), added c. 1870, having gable-fronted single-bay entrance porch to the north end of the south-east gable end. Modern single-storey toilet block attached to the north-east elevation of sacristy. Pitched slate roof to main body of church having terracotta\red clay roll and cresting ridge tiles, cast-iron rainwater goods, projecting cut stone eaves courses, raised cut stone verges to the gable ends of main body of church having gabled projections along length and with gabled kneeler stones at eaves level, and with Celtic cross finial over chancel gable (south-east). Pitched slate roof to sacristy having overhanging eaves and clay ridge tiles, pitched slate roof to porch to the north-east elevation having cut sandstone verge and with cut sandstone kneeler stone at eaves level. Raised cut stone\ashlar parapet to tower having cut stone corner pinnacles, and with stepped Irish-style crenellations\crow stepped parapet having cut stone coping over. Cement rendered ruled-and-lined walls over chamfered plinth course to main body of church having clasping stepped buttresses between each two bays with feathered cut stone capping to the nave side elevations (north-east and south-west), and with flush block-and-start quoins to the corners. Cement rendered ruled-and-lined walls to sacristy having flush block-and-start quoins to the corners. Randomly coursed and squared rubble stone construction to tower having stepped cut stone pilasters (on square-plan) to the corners with feather cut stone coping delineating stages, cut stone stringcourses (chamfered at second stage level), cut stone course to base of parapet over cut stone corbels, and with round clock openings (no clocks) at second stage level having cut stone surrounds. Pointed-headed window openings to side elevations of nave (north-east and south-west) and to chancel having smooth rendered or ashlar surrounds, stone sills, moulded stone hoodmoulding over with label stops, and with diamond-pane cast-iron windows and timber Y-tracery. Figurative leaded stained glass windows to window openings to chancel (south-east). Pointed-arched window opening to the north-west face of tower at first stage level having chamfered cut sandstone surround, chamfered cut stone sill, sandstone hoodmoulding over with carved stone mask-stops, and with replacement window over leaded window fitting. Pointed-arched openings to tower at third stage having chamfered sandstone surround, cut stone Y-tracery, and timber louvered fittings. Pointed-headed door openings to belltower having chamfered staged ashlar stone reveals, cut stone hoodmoulding over with carved stone mask-stops, timber panelled double-doors, sand surmounted by leaded diamond-paned fanlight. Pointed-arched door opening to the front face of porch to the north-east elevation having chamfered staged ashlar red sandstone reveals with chamfer-stop, sandstone hoodmoulding over with carved red sandstone mask-stops, replacement doors and fanlight. Square-headed openings to sacristy having one-over-one pane timber sliding sash windows and timber doors. Interior with Gothic-style reredos having triple-shafted cluster columns to reredos, with four gable-fronted niches having statues and with painting over, decorative moulded flat panelled ceiling with Jacobean-style panels having moulded rosette to central panels, cavetto moulded coving to eaves on moulded cornice, marble altar and baptismal font, gallery over north-west end of nave having timber parapet with Gothic-style panels; gallery supported on cast-iron columns (on circular-plan) having rendered capitals over with shamrock motifs, decorative torus moulded corners to window reveals, painted moulded wainscoting, and timber pews with perforated chamfered ends. Set back from road in elevated site to the north\north-east of the centre of Buncrana. Rubble stone boundary walls to site boundaries. Main gateway to the north-west of church comprising a pair of coursed and squared rubble stone gate piers (on square-plan) having moulded capping with cornice, and having a pair of cast-iron gates. Hooped wrought-iron pedestrian gates to the west of church. Graveyard to site with collection of nineteenth- and twentieth-century gravemarkers, both recumbent and upstanding, and some surrounded by iron railings. Graveyard across road to the south-west having collection of mainly nineteenth-century gravemarkers, of recumbent, table and upstanding-types, and some surrounded by iron railings.

This substantial mid nineteenth-century Catholic church dominates the landscape to the north\north-east of Buncrana. Despite some alterations it retains its early form and architectural character. The pointed-arched openings give it a Gothic Revival character that is typical of its date in Ireland. Of particular note is the well-detailed belltower with cut stone surrounds to the openings, pinnacles and Irish-style crenellations to the parapet, and corner pilasters with feather coping delineating the stages. This belltower is a conspicuous feature in the landscape and is a local landmark. The more prosaic side elevations are enlivened by the survival of cast-iron quarry-glazed windows with timber Y-tracery and carved hoodmouldings over, by the clasping buttresses, and by the fine porch to the north-east elevation with crisp sandstone detailing. This building is unusual in that it has a substantial two-storey sacristy attached to the south-east gable end; the scale of this feature suggests that it may have been built\intended to be a parochial house. The spacious interior impresses with the elaborate Gothic-style reredos having triple-shafted cluster columns, the decorative moulded flat panelled ceiling with Jacobean-style panels the marble altar and baptismal font, and by the gallery over north-west end of nave having carved timber parapet, which is supported on cast-iron columns with rendered capitals over. The fine figurative Mayer of Munich-style stained glass windows lighting the chancel are of a higher quality than is usually encountered at rural churches, and add further decorative interest to the interior. This church was original built in 1848, and replaced an earlier T-plan chapel that was extant in 1837 (Ordnance Survey first edition six-inch map); this church was located to the centre of the graveyard to the south-west of the present edifice. A number of the graves to the graveyard surrounding the site of the earlier church date to the first decades of the nineteenth-century, including one dated 1814, which suggests that this earlier church was extant by this time. The present church was built for the Revd. E Maginn (died 1849 and buried in graveyard to site), and the Board of Works granted £500 towards its construction. The scale of this church suggests that wealthy local landowners may have been involved in its initial construction. Interestingly, this church appears to have served as the Catholic church for Buncrana as there was no Catholic church in the town until the construction of St. Mary’s Oratory (see 40815061) in 1928-9. The original architect responsible for the designs of this church at Cockhill is not known. The hall-and-tower form of this much is reminiscent of many Board of First Fruits-style Church of Ireland churches built throughout Ireland during the first decades of the nineteenth century, albeit on a much larger scale here at Cockhill. It is also noteworthy that this church was built at the high point of the calamity that was The Great Famine (1845 – c. 1851), when resources were at a premium. The graveyards to site, particularly that to the south-west surrounding the site of the earlier church, adds considerably to the context of this site. The graveyards contains a collection of mainly nineteenth-century stone gravemarkers of recumbent, table and upstanding types, some of which are of artistic merit. The graveyard also contains a number of Commonwealth graves commemorating soldiers who were killed during the First World War (1914-18), including the graves of a number of officers and men who died following the sinking of the HMS Laurentic off Donegal in October 1917, which adds additional social interest to the site. This church, which is one of the more substantial examples of its type and date in County Donegal, represents an integral element of the built heritage and social history of the local area. The simple rubble stone boundary walls, and gateways with hooped wrought-iron and cast-iron gates, add considerable to the setting and context, and complete this notable composition.