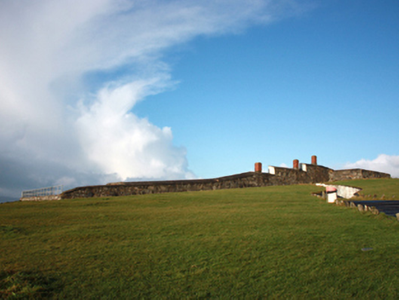 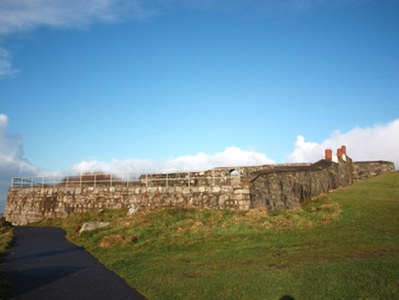 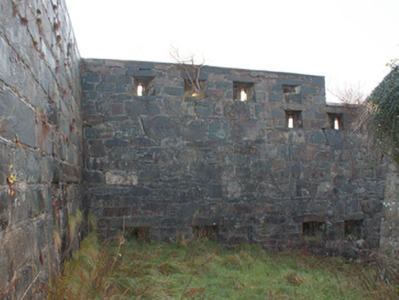 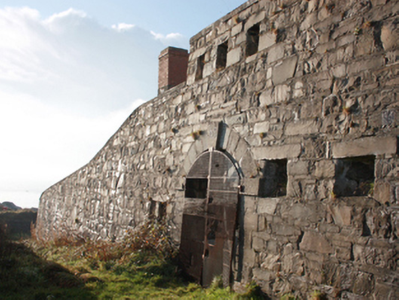 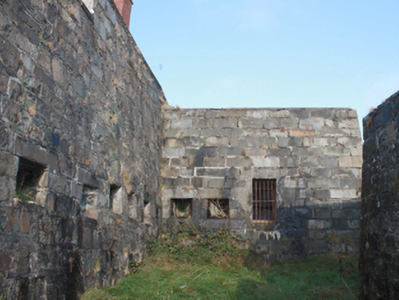 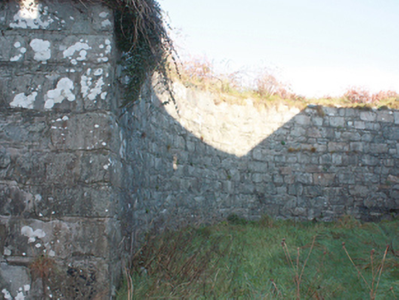 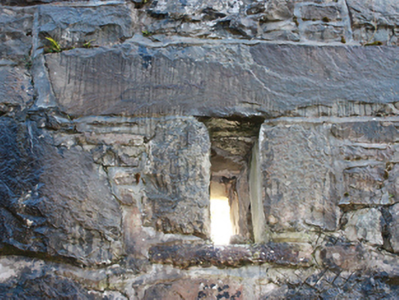 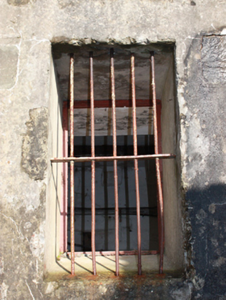 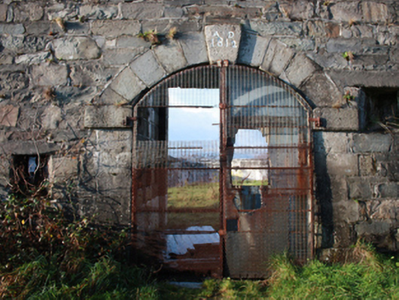 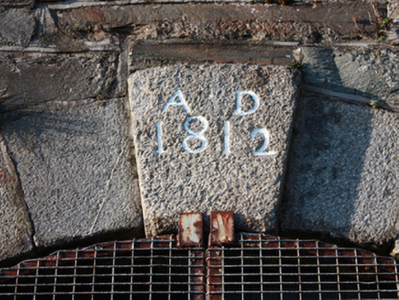 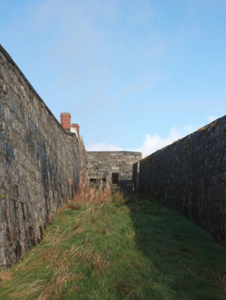 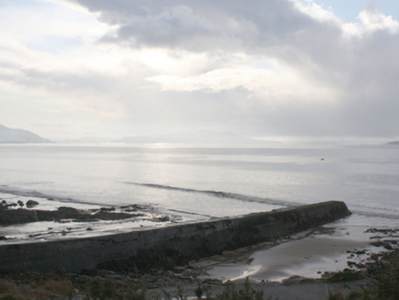 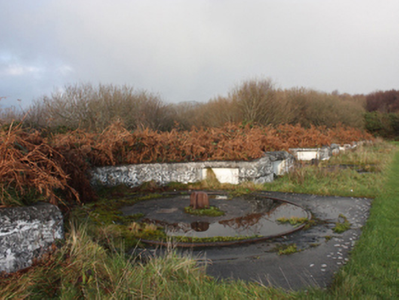 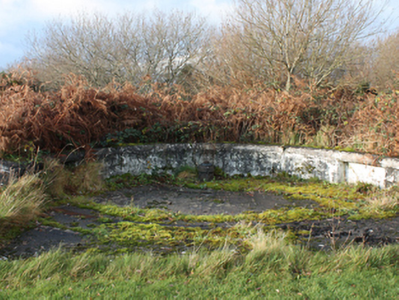 Freestanding multiple-bay two-storey defensive battery, dated 1812 and altered c. 1897, rectangular plan with obtuse angle to north-east, attached to east portion of five-sided D-shaped battery. Now closed to public. Parapet atop tower and battery, red brick (stretcher bond) chimneystacks with terracotta pots to south-east battery elevation. Coursed and squared rubble limestone walling with stressed quoins and plinth to tower, squared random coursed walling with tooled quoins and modern metal railings, smooth rendered coping. Multiple musket loops at ground level and first floor of tower (now reduced in height, probably at end of nineteenth century), square-headed opening with vertical five-bar iron guard to south-west elevation, multiple machicolations to battery at ground and parapets levels. Segmental-headed entrance archway at with dressed voussoirs, dated keystone (1812) and projecting imposts and jambs, three machicolations to each side of reveal, painted timber matchboard doors, accessed via curved sunken way cut through glacis at south-east. Interior modified 1897 by construction of two 6-inch breech-loader emplacements and basement magazine, replacing earlier armament mounts at seaward side of battery. A 64-pounder RML concrete practice battery built c. 1900 survives outside the main battery and guard house to the north-east, with six gun emplacements, four with front pivot and iron rails or tracks and two with a central pivot and circular track, cartridge recesses and magazine to south-east, and depression rangefinder positions to each end. Located on the edge of a rocky headland on the shores of Lough Swilly with strategic views north, west and south across the Lough, glacis to south-east is now a maintained lawn. RNLI boathouse located to south-east and boat slipway to south.

Ned’s Point Fort formed part of the costal defences of Ireland and Lough Swilly for the duration of the nineteenth century. The design and plan of the defensible guardhouse or tower is a relatively rare example of its type, and although there are parallel examples at the mouth of the Shannon and Shannonbridge - and at Rathmullan, it is a style that was apparently unique to British coastal fortifications in Ireland. The tower has several interesting and distinguishing architectural details including the obtuse angle on the north-east elevation facing the dry ditch, with angled musket loops, set out to allow diagonal fire across or along the ditch; similar loops are in the adjacent battery walls at this level and in the parapet. Unusually, the tower is joined to the walls of the battery where these meet at a right angle at the landward salient angle. The fort has important historical connections to one of the pivotal moments in Irish history as one of six temporary batteries established c. 1798 to defend the Lough against French attack. Its guns, including a 42-pounder, came from the captured French ship La Hoche. The United Irishman leader, Wolfe Tone, was also captured from this ship. Proposals were made in 1806 to construct a permanent battery here at an estimated cost of some £6,000. These works were to include a tower for two guns and a battery for four guns. In 1809 the Ordnance Office approved estimates for £5,450 for the construction of this fort. Four 24-pounders and two 5.5-inch howitzers are listed here by the Ordnance Office in 1817. The fort was modified c. 1895 when two 6-inch breech-loading guns and two 64-pounders were approved by the Ordnance Office; by 1906 the two 6-inch guns were in place. The interior was modified to accommodate emplacements for the two 6-inch guns, with a basement magazine between, a wing battery with six emplacements was added to the north of and the blockhouse or tower was reduced in height around this time. The battery continued to defend Lough Swilly until c. 1913 by which time Dunree Battery and Lenan Battery were considered to have sufficient armament against potential attack, and the fort was abandoned. This site constitutes one of a number of coastal batteries built by the British military around Lough Swilly along with Inch Fort to the south, Fort Dunree and Lenan Head to the north, and Muckamish, Rathmullan and Knockalla to the far side of the Lough. The site was refurbished by Buncrana Town Council in the early 1990s, and remains an important element of the built heritage of Donegal.