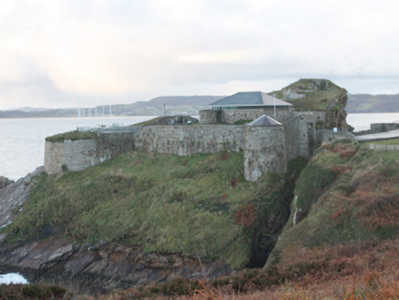 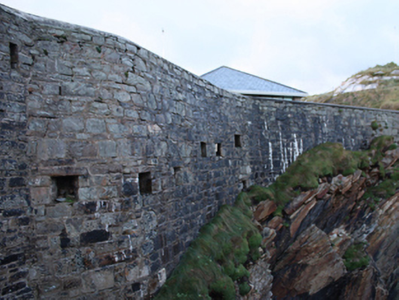 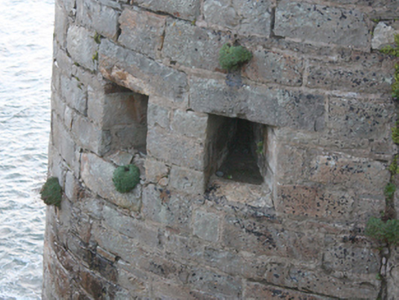 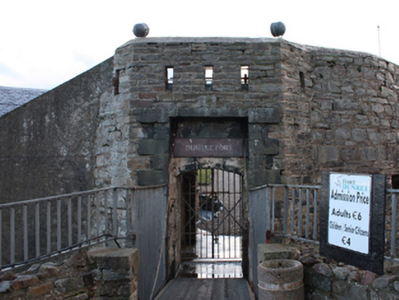 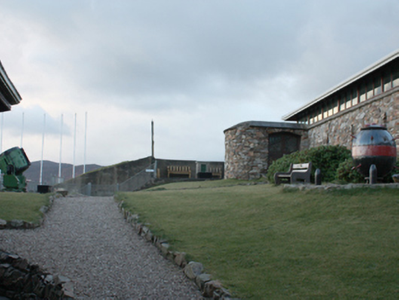 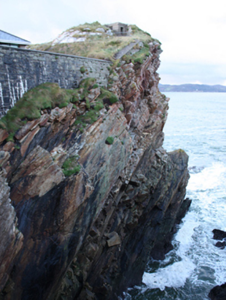 Military battery, built c. 1812-3, on complex irregular-plan having entrance over drawbridge to the east, defensive bastions (on circular-plan) to the south-east, south-west and north-west corners. Modified c. 1847 and c. 1889. Now in use as museum with modern museum building to the north end of the interior. Site enclosed by rubble stone curtain walls with cut stone coping over, partially roughcast rendered. Recessed segmental-headed door opening to the east with cut stone surround, set in canted projection to curtain wall having square-headed recess with tooled ashlar block-and-start surrounds; gun loops over door and in places along adjoining curtain walls. Square-headed window openings, some with surviving three-over-three pain timber sliding sash windows. Located on a natural rock outcrop jutting out into Lough Swilly with cliff faces to three sides (south, north, and west). Later battery (see 40901826) on hilltop to the east, complex of single-storey corrugated-metal buildings (see 40901824) to the east, dispersed pillboxes and assorted single-storey watch huts (see 40901825) etc. to site

This impressive Napoleonic-era coastal fortification is an important element of the built heritage and history of County Donegal. Despite some modifications over the years, and recent works to create a museum, it retains much of its stark and imposing earlier character and form, and much of its salient fabric. The present fort replaced an earlier temporary earthen battery at this site, which was one of a number established by the British after 1798 and the continuing threat of French invasion (there was an attempted landing in Lough Swilly by the French in 1798 with a force of some 8,000 men, which was repelled at sea). Lough Swilly was also an important Royal Navy anchorage at this time. Two 42-pounder guns captured from the French ship Hoche, five British 18-pounders and two British 9-pounders were deployed here c. 1801, probably at a circular or semi-circular bastion to the north of the site (depicted in painting of 1802). A series of single and two-storey buildings were located in the centre of the fort at this time (see above; painting). Gother Man made proposals for updated Irish coastal defences in 1806 – this included rebuilding\building six batteries\towers along Lough Swilly, and some £10,000 was estimated for the works at Fort Dunree. £4,500 was estimated for the ‘re-forming of Dunree’ by the Ordnance Office in 1809. Works took place in 1812 -13, and a Henry Haswell was appointed the master gunner at Dunree in 1813. A Mr Edgar of Buncrana was the main contractor, and a Captain Spicer was the works supervisor. Nine 24-pounders were in place at Fort Dunree in 1817. Two of the 24-pounders at Dunree were replaced in 1847 by two 5.5 inch howitzers. The gunners left the Napoleonic fort at Dunree in 1886. In 1889 the Defence Committee issued a report recommending that two 4.7-inch quick firing guns should be established in the old fort at Dunree with two 6-inch breech-loading guns placed on top of Dunree Hill to the east along with two three-pounder quick firing guns to guard against attempted landings at Crummie’s Bay to the north beneath Dunree Hill. The original Martello-type tower to the centre of the old fort was demolished c. 1900 as it obstructed the field of fire from the new fort on the summit of Dunree Hill to the east (see 40901826). As Lough Swilly was one of the Treaty ports, the fort remained under British military control until 1938. It was in use by the Irish Army during the Second World War when a number of anti aircraft guns were added to site. This complex forms part of a site that together constitute one of a number of coastal batteries built by the British military around Lough Swilly along with Inch Fort and Neid’s Point to the south, Lenan Head to the north, and Muckamish, Rathmullan and Knockalla to the far side of the Lough. Of historic importance to the Irish nation, shedding light on the strategic value of Lough Swilly especially to the British during World War One, and played an integral role in safeguarding Ireland’s neutrality during World War Two. Furthermore, the site provides insight into the defensive thinking of military planners and the skills of military engineers.