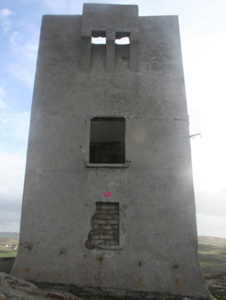 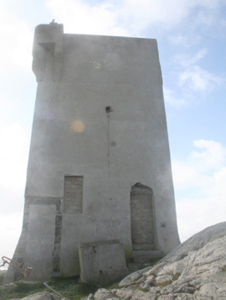 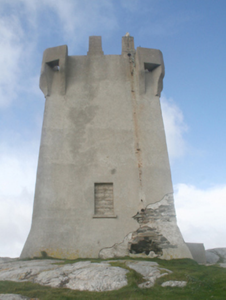 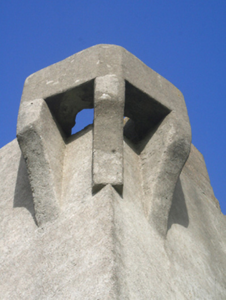 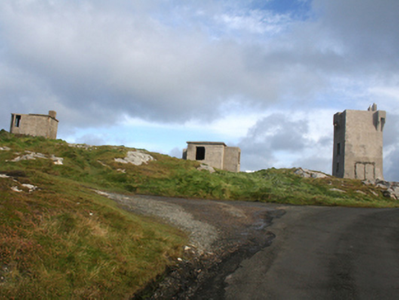 Freestanding three-storey former signal tower on square-plan, built c. 1805, having machicolations to south-east and south-west corners, and to centre of north elevation at parapet level. Subsequently in use as a weather\ meteorological station, c. 1870, later a signal tower\semaphore station associated with Lloyds of London, c. 1890, and later as a post office telegraph station, c. 1910. Now out of use and derelict. Evidence of single-storey addition formerly attached to west and east elevations, now demolished. flat-roof, now collapsed, originally hidden behind raised parapet having two rendered chimneystacks with clay pots over to the south elevation. Rubble stone constructed, cement rendered c. 1900, with pronounced batter to base. Square-headed window openings now mostly blocked with modern blockwork, some surviving stone sills and later concrete sills. Original window fittings now gone. Square-headed doorway to the north elevation, now infilled with modern blockwork. Originally doorway possibly to the centre of the north elevation, now infilled. Located in prominent and elevated location to the north end of Malin Head with cliffs and the Atlantic Ocean to the north. Low rendered rubble stone boundary walls to the north-east of tower. Ruinous detached single-bay single-storey former World War Two watchman's station (see 40900101) to the north-west of site, and probable former radio\telegraph stations (see 40900113) located adjacent to the north-west and north of site.

This notable former Napoleonic-era signal tower occupies a dramatic coastal location to the north end of Malin Head, and is a prominent local landmark in the scenic landscape to the northern tip of Ireland. This structure is one of upwards of eighty such buildings that were constructed along the west, south, south-east and north-west coastlines of Ireland by British authorities between 1804 and 1806 in reaction to the various French invasion attempts in the 1790s, particularly the 1798 French landing at Killala in County Mayo. Signal towers were generally built to the same plan, although some slight regional variations are found. They worked on a signalling system using ball and flag methods, where various messages could be transmitted from station to station, quickly raising the alarm in case of the siting of enemy vessels and fleets etc. A c. fifty foot mast was positioned on the seaward side of the signal tower where the flags and balls would be hoisted so that the next signal tower could see the message and pass it on to the adjacent one and so forth. In order to cut construction costs etc., signal towers are, as a rule, located on high ground with a clear line of sight over the sea and to the neighbouring towers to either side. Therefore, the presence of a signal tower guarantees spectacular views and situations, as is the case here at Malin Head. This particular example was largely built by 1804, and a signal lieutenant was appointed in February 1806. Following The Royal Navy's (under Nelson) victory over the French and Spanish fleets at the Battle of Trafalgar in 1805, the threat of invasion diminished substantially, and by 1809 the decision was made to abandon the signal towers that are dotted along the Irish coastline. These structures now act as tangible historical documents of this era in Irish history, and are appealing landmarks of some picturesque value along the Irish coastline. The tower apparently later served as a weather station during the second half of the nineteenth century. It was subsequently in use as a signal tower for the insurance company Lloyds of London, c. 1890, when information on shipping arriving across the Atlantic (Lloyds of London underwrote the insurance for many transatlantic shipping and mercantile ventures) was passed from a semaphore station on the offshore island of Inishtrahull, and to and from shipping to Malin Head, and eventually on to London. The tower was probably rendered around this time. In 1901, Guglielmo Marconi (1874 – 1930) established a radio signal station adjacent to Lloyds Tower (see 40900113), and in 1902 succeeded in sending the first commercial radio message from Malin Head to the ship S.S. Lake Ontario. Apparently the radio station was involved in the sea trials of the radio system on the ill-fated RMS Titanic in April 1912. Later the station was taken over by the Post Office for communication purposes. This imposing structure is a local landmark and represents an integral element of the built heritage and history of the Malin Head area, and forms an interesting and historic group of structures along with the adjacent World War Two-ear watchman’s hut (see 40900104) and the probable former telegraph and\or semaphore station (see 40900113).