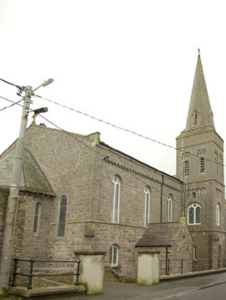 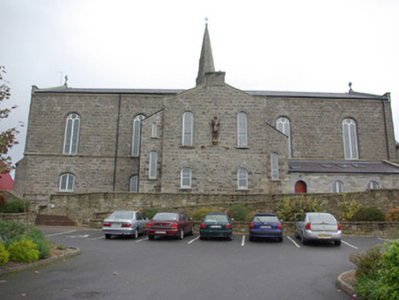 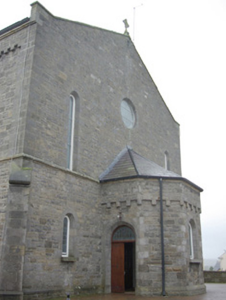 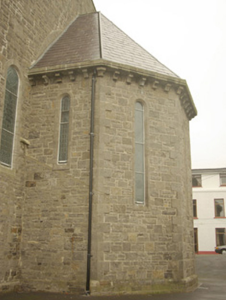 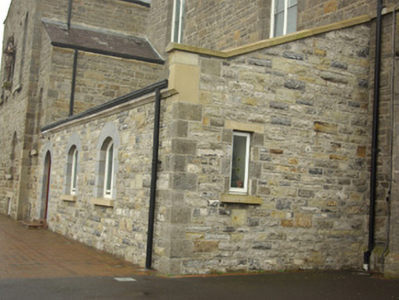 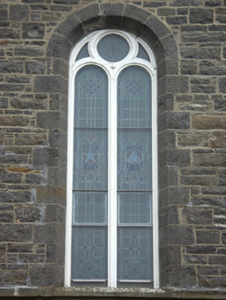 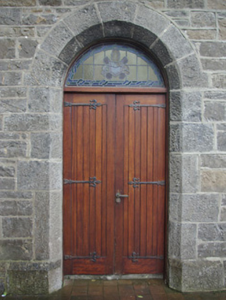 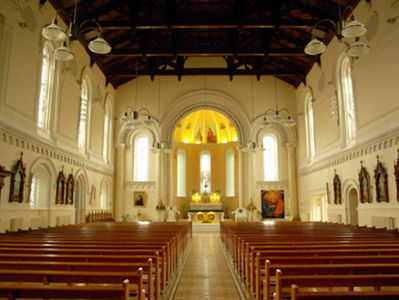 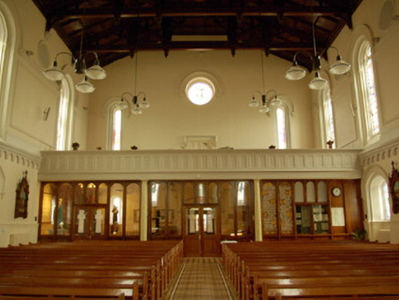 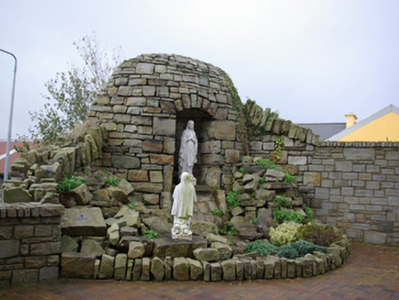 Freestanding seven-bay double-height Catholic church, dated 1842 and modified 1860 and 1891, having two-storey over basement sacristy to the centre of the south elevation (1842), single-bay canted chancel apse to the east end (1860), single-bay single-storey canted entrance porch to the west gable end, and having three-stage tower (on square-plan) to the centre of the north elevation having broached ashlar spire over (on octagonal-plan) having wrought-iron cross finial. Single-bay gable-fronted entrance porch attached to the north-east (north elevation, second bay to the west from tower). Three-bay single-storey extension, c. 1980, attached to the south-east corner (to east of sacristy on the south elevation). Pitched natural slate roof to main body of building having raised ashlar coping verges to gable ends (east and west) having carved stone Celtic cross finials to gable apexes and raised ashlar plinths over eaves, and with moulded cut stone eaves courses to side elevations (north and south), running across tower as stringcourse at base of third stage. Pitched natural slate roof to sacristy having raised cut stone verge/coping to south gable end with rasied ashlar plinths over eaves; ashlar chimneystack to gable apex. Hipped natural slate roofs to canted apse to the east and to canted entrance porch to the west; corbelled cut stone eaves course to apse. Pitched natural slate roof to gable-fronted entrance porch to the north elevation having raised cut stone coping to north gable end having cross finial to gable apex and cut stone kneeler stone at eaves level. Coursed squared rubble stone walls having chamfered cut stone plinth course, flush ashlar quoins to corners and with cut stone sill course to main body of building at clerestory level. Stepped diagonal corner ashlar buttresses to corner of main body of building and to tower. Cut stone corbelled stringcourse above clerestory window openings to north elevation. Statue of St. Patrick to gable end of sacristy at second floor level. Segmental-headed window openings to main body of building at ground floor level to south and north elevations having chamfered cut stone surrounds and cut stone sills and with stained glass windows; tall round-headed window openings over at clerestory level having chamfered cut stone surrounds, stained glass and having paired round windows with timber tracery having occuli detail to head. Round-headed openings to west gable end having chamfered cut stone surrounds; circular/ocular window opening with chamfered surround at clerestory level. Round-headed window openings with chamfered cut stone surrounds to the east gable end and to apse. Round-headed window openings to sacristy. Round-headed window openings to first stage of tower, segmental-headed openings over with timber tracery and leaded glass windows. Paired round-headed openings to tower at belfry/third stage level having timber louvers; pointed-arch openings to spire having timber louvers and with hoodmouldings over with decorative label-stops. Round-headed doorways to the north face of canted porch (west), to east elevation of gabled porch to the north, and to the north face of tower, having chamfered cut stone surrounds, timber double-doors and leaded overlights. Cut stone date plaque over doorway to tower inscribed ‘Dan Campbell, Builder, 1842’. Interesting interior with timber open queen post roof with timber tracery, extensive classical-style stucco panelling and moulding, engaged composition columns to chancel arch (separating apse and side chapels), Ionic pediments and aedicules to central bay of side elevations (north and south), and with timber gallery (now infilled below) to the west end supported on cast-iron columns. Set slightly back from road in an elevated site to the north of Ballyshannon town centre. Bounded on street-frontage to the north by low rendered boundary wall having chamfered coping and iron railings over. Carpark to the south. Modern grotto to south-west flanked by sections of modern walling. Celtic cross style stone memorials to the south-west of church.

This substantial mid-nineteenth century Catholic church retains its early character and form. It is well-built with sparse - but high-quality - cut stone detailing to the exterior, particularly to the tower and spire. The rather austere detailing to the exterior is contrasted by the rich classical stucco work and the elaborate timber roof to the vast, open interior. The round-headed window openings lend it a vaguely Romanesque appearance to the exterior, while the belfry and spire to the tower have a Gothic-Revival character. The soaring broached spire dominates the skyline to the north of Ballyshannon town centre, dwarfing the earlier tower of the Church of Ireland church (40852016) to the west; the nave of which was rebuilt around the same time (1841). This building is unusually large for its date and type, suggesting the financial input of rich local Catholic merchants etc. This building was built to designs by the eminent architect John B. Keane (d. 1859), the architect responsible for a number of large-scale projects for the Catholic church in the 1840s, including the original designs for St. Mel’s Cathedral, Longford Town (13002327). Keane was also responsible for the rebuilding of nearby Camlin Castle (later demolished as part of Erne Hydro-Electric Scheme in the 1940s/50s) and the associated gateway (see 40910748) for the Tredennick family c. 1838. The main contractor involved in the construction of St. Patrick’s Church was a Daniel Campbell (of Pettigoe?), who left his mark on the date plaque over the doorway to the tower, and the foundation stone was apparently laid in May 1842 by the Revd. Dr. McGettigan. The church was built at a cost of £1,380, and enormous sum of money for the Catholic Church in Ireland at the time (Begley 2009). The canted/polygonal apse to the church was added in 1860 to designs by the important Gothic Revival architect James Joseph McCarthy (1817 - 82), while a new roof (and a Celtic cross-style memorial to Dr. Sheil) was added in 1893 to designs by another eminent architect, William Henry Byrne (1844 – 1913). The present church occupies the site of an earlier Catholic place of worship, built in 1795 (Lewis 1837). This building was apparently originally built as a simple rectangular or hall-type building (Begley 2009), but is depicted on the Ordnance Survey first edition six-inch map (c. 1836) as a small T-plan structure. This church was in need of substantial work in the 1830s and the then parish priest, a Revd. Cummins, decided to build a new church, the present edifice. This fine building is an important element of the built heritage and social history of Ballyshannon, and is a landmark feature overlooking the town to the north.