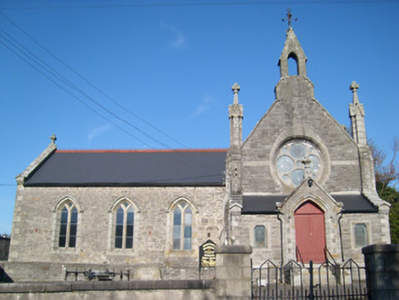 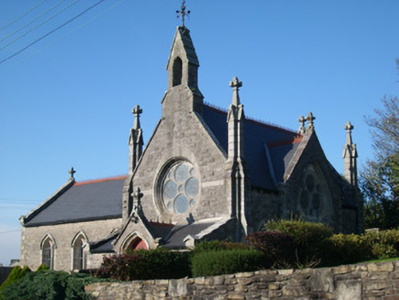 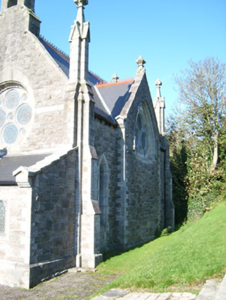 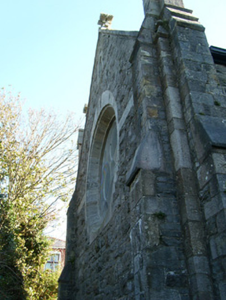 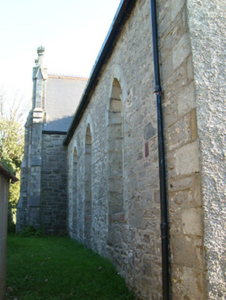 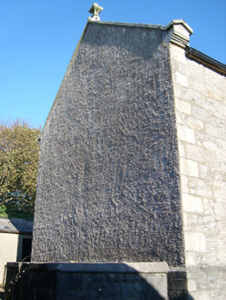 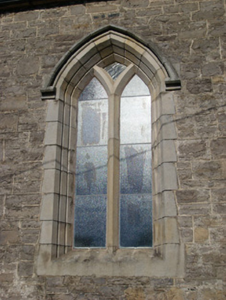 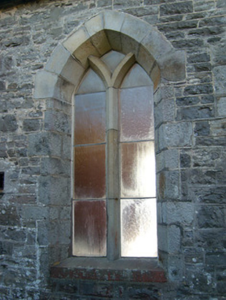 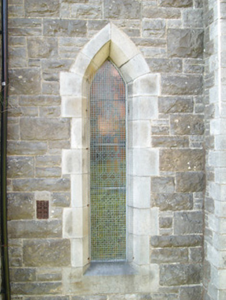 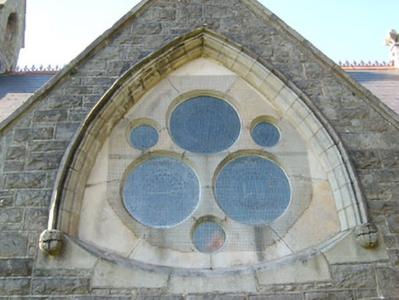 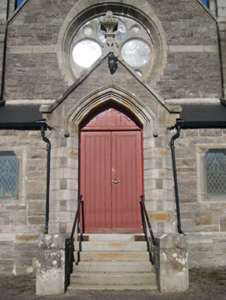 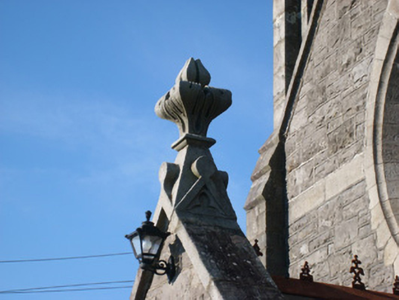 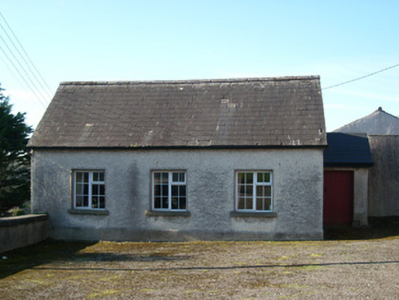 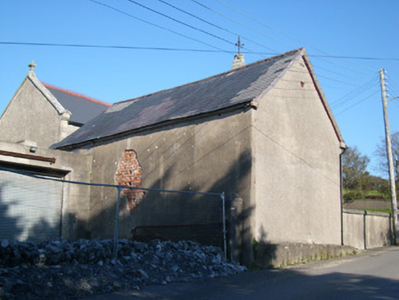 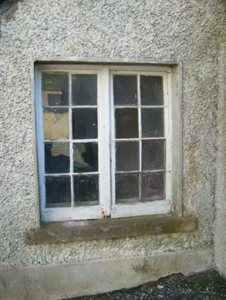 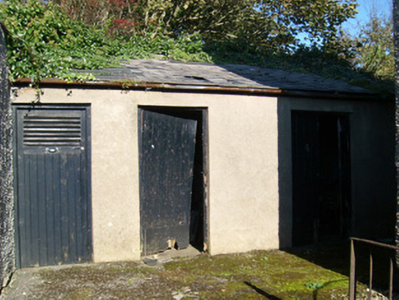 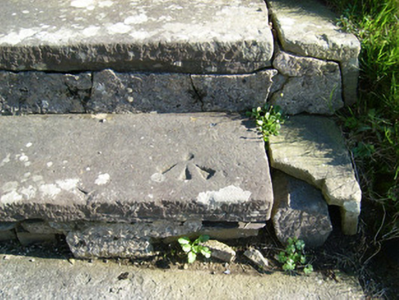 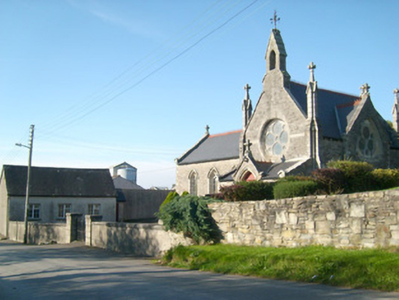 Freestanding Presbyterian church, dated 1834 and modified and enlarged c. 1885, comprising a three-bay hall to the west with projecting gable-fronted extensions to the south and north elevations of the east end of original hall, added c. 1885. Three-bay single-storey block attached to the south end of the projecting addition to the south having shallow projecting gable-fronted porch to the centre bay. Stepped open belfry to gable apex of gabled projection to the south having wrought-iron cross finial over. Shallow gable-fronted projection to the east elevation/chancel. Pitched artificial slate roofs of building having decorative (metal?) ridge cresting and projecting cut stone eaves course. Raised cut stone verges to gable ends and to gabled porch having moulded kneeler stones to eaves and with decorative moulded stone finials to gable apexes. Lean-to artificial slate roof to entrance porch projection. Some remaining sections of cast-iron rainwater goods. Roughly squared and coursed rubble stone construction to original hall to the west having flush cut stone quoins to the corners and chamfered plinth course to base. Rock-faced snecked stone walls to gabled additions to the east having chamfered cut stone plinth course, and having flush squared ashlar quoins to the corners. Flush smooth cut stone stringcourse to south projecting gable at eaves level. Roughcast rendered finish to west elevations of main hall. Stepped ashlar limestone clasping buttresses to the corners of the gabled projections to the south and the north of original hall surmounted by ashlar cruciform-plan gabled pinnacles over with ornate foliate finials. Cut stone finial on gabled carved stone base to projection to the east elevation. Pointed-arched window openings to the south and north elevations of hall to west having staged chamfered ashlar surrounds, cut stone Y-tracery, chamfered ashlar sills, plate glass windows, and hoodmouldings over. Central circular window openings to the north and south gable ends of extension to the east having chamfered cut stone surround with ashlar inset/tracery having circular window openings with stained glass. Curved triangular/sub-circular window opening to the shallow chancel project to the east having chamfered ashlar surround with ashlar inset/tracery having circular window openings with stained glass, and having moulded hoodmoulding over with elaborate carved foliated label stops. Pointed-arch window openings to the east elevation, flanking central shallow chancel projection, having chamfered cut stone surrounds, chamfered sills and stained glass. Shouldered window openings to south face of single-storey porch projection, flanking doorway, having chamfered cut stone surrounds, chamfered sills and leaded stained glass. Pointed segmental-headed door opening to front face of porch to south having chamfered cut stone surround, hoodmoulding over with foliated label stops, replacement timber double-doors, and timber sheeting to former overlight. Flight of cut stone steps serving doorway flanked to either side (east and west) by plinth walls having cut stone coping over with chamfered margins. Modern metal railings to steps. Set back from road in own grounds to the west of Ballyshannon town centre. Tarmacadamed forecourt to the south with small graveyard to the south-west of enclosure having cut stone gravemarkers, some with wrought-iron railings. Cut stone steps to graveyard, one having incised Ordnance Survey benchmark. Bounded on road-frontage to the south by rendered boundary wall having cut stone coping over. Gateway to the south of church comprising a pair of ashlar gate piers (on square-plan) having capstones over, and with a pair of wrought-iron gates. Single-storey former school or Sunday school to the south-west having pitched natural and artificial slate (fibre cement), roughcast rendered walls over smooth rendered plinth course, and square-headed window openings having replacement windows. Single-bay entrance porch attached to the north gable end having square-headed openings with timber door to the east face and multi-pane timber casement window to the north elevation. Render failing to west elevation of school exposing red brick construction. Single-storey outbuilding to the north-west having roughcast rendered walls, lean-to roof and square-headed openings with timber doors. Associated former manse (not in survey), built c. 1840, adjacent to the east.

An appealing and well-detailed nineteenth-century Gothic Revival former Presbyterian meeting house that retains its early architectural form and character. The quality of the stone work is emphasised by the extensive cut stone detailing, particularly to the openings and the entrance porch, and is indicative of the high skill of the masons involved in its construction. The buttresses, continued by the complex pinnacles and finials over, lend a pronounced vertical emphasis to this building, and give it a strong presence in the countryside to the west of Ballyshannon town centre. This building was originally built in 1834 as a simple gabled five bay hall-type church or meeting house. It was later extended to the east, c. 1885, by the addition of a more architecturally ambitious and robustly-detailed Gothic Revival block with pinnacles to the corners having intricately carved finials, unusual large window openings with heavy plate tracery to the gable ends, and an open bellcote to the entrance gable. The contrast between the plain original section – with its squared rubble stone construction, and the elaborate late-nineteenth century block to the east - which is constructed of snecked rock-faced masonry - creates interesting tonal and textural variety that further emphasises the two distinct phases of construction. The architect and/or builder involved in the original block is/are not known, but it was originally built for a Dr James Murphy (Rowan 1979). The later block was apparently built to designs by Robert William Armstrong (1824 – 1884), an architect and a founder member of Belleek Pottery (and possibly the designer of the original factory) in 1857, and the improvements were carried out for an Andrew Lowry, who was minister here from 1842- 1901 (Begley 2007). This church along The Mall continues a long history of Presbyterianism in Ballyshannon, with the first place of worship established on College Lane in 1674 (first minister was William Henry). The present building closed for worship in 2007, ending over three hundred years of Presbyterian worship in the town. This building is a notable addition to the built heritage of Ballyshannon, and represents an interesting historical reminder of the religious diversity that existed in this part of Donegal in the nineteenth century. The incised benchmark to a step in the grounds is an interesting historical reminder of the work of The Ordnance Survey during the 1830s and the production of the first six-inch map series of Ireland during the 1830s and 1840s. The simple single-storey former school or Sunday school, the graveyard, boundary walls, gate, and piers add to the setting and complete this composition. The associated but now altered two-storey former manse (not in survey) adjacent to the east, built c. 1840 at a cost of £500, adds further to the context.