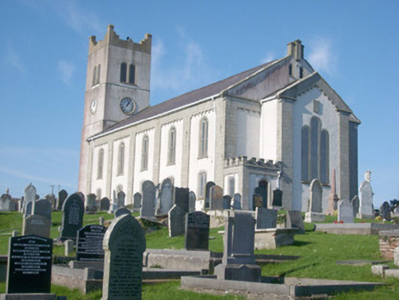 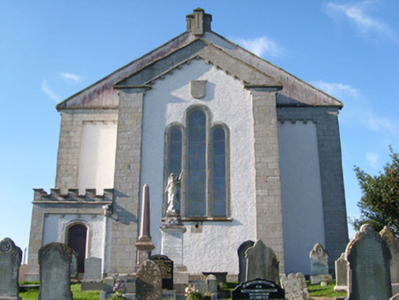 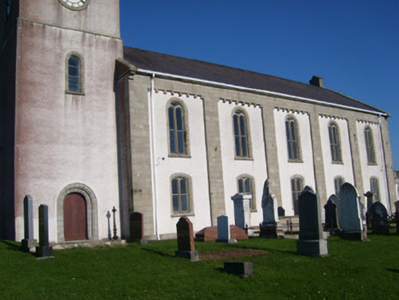 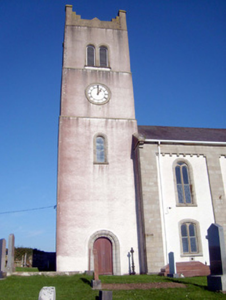 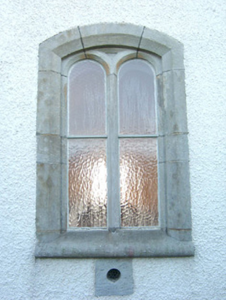 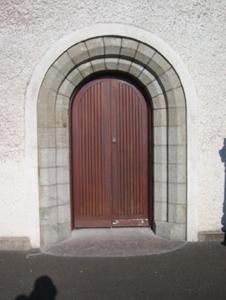 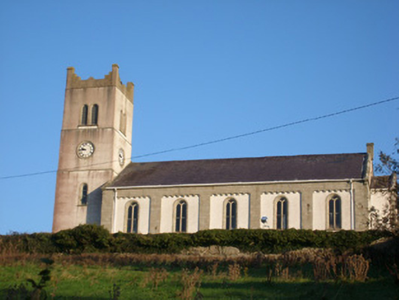 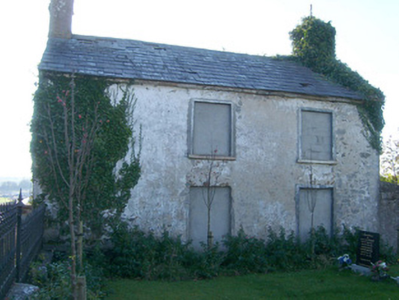 This fine Church of Ireland church is located in an elevated position overlooking Ballyshannon and it dominates the skyline of the town. It retains its early architectural character and form, and it is an unusually large example of its type and date. Its visual expression is enhanced by the extensive cut stone detailing, particularly to the openings and by the crisp, if rather austere, ashlar pilaster panels to the side elevations of the nave. The round-headed window openings lend this building a subdued Romanesque/Neo-Norman character to the exterior. This building is clearly of two distinct periods of construction with the plain mid-eighteenth-century bell tower contrasting with the more richly-detailed nave and chancel, which were/was added/rebuilt between 1839-42. Lewis (1837) records that the ‘church was erected in 1745, on an eminence near the town, and is the principal landmark for vessels entering the harbour’. However, other sources suggest that the church was built in 1735 (Begley 2009). The later mid-nineteenth century works were carried out to designs by William Hagerty, an architect from Derry who worked extensively in for the Ecclesiastical Commissioners during the late 1830s (IAA; plans in RCB Library). Hagerty was also responsible for the designs of the Church of Ireland church at nearby Bundoran (40851017), built in 1839. However, it was another architect – William Farrell (d. 1851) – who appears to have overseen the construction works in Ballyshannon (IAA). Farrell was architect with responsibility for the ecclesiastical province of Armagh with the Board of First Fruits from 1823, and later he was architect with the Ecclesiastical Commissioners from 1833 - 43. This church at Ballyshannon is similar in form and appearance (having ashlar pilaster strips between bays) to the Church of Ireland church at Pettigoe (40850022), a building that Farrell designed in 1838. Slater’s Directory (1881) records that the church ‘was recently re-erected at a cost of £5,000 [other sources put the cost at £3,405], in the Saxon style of architecture, for the vicar, Rev. George Tradennick. The interior is handsomely fitted up, and contains 1,200 sittings. The east window is particularly worthy of notice’. This ‘noteworthy window’ appears to have been replaced by fine stained glass windows by Percy Bacon, dated 1900, depicting the Resurrection, the Ascension and the Sermon on the Mount. In 1899 ‘extensive repair and improvements’ were carried out at St. Anne’s to designs by Thomas Elliott (1833 – 1915), an architect who was also responsible for the designs of the Methodist chapel (40852037) in Ballyshannon in the same year. The tower was altered c. 1903, with paired openings added at belfry level (replacing single-openings), clock faces inserted, and crenellations added over the parapet (photograph c. 1900 shows tower without any of these features; clock faces apparently added in 1903 - Begley 2009). St. Anne’s is surrounded by a graveyard containing mainly nineteenth- and twentieth century gravemarkers, both recumbent and upstanding, and some of high artistic merit, which add considerably to the setting. Two of the more interesting markers are the Martin Memorial (mason/sculptor was a Alfred P. Sharp); a red polished granite(?) obelisk over a finely carved pedestal, which commemorates William Limerick Martin, District Inspector Royal Irish Constabulary who ‘was cruelly murdered at Derrybeg, Gweedore, whilst nobly doing his duty’ in 1888; and the and the grave of the noted poet and author William Allingham (1824 or 1828 - 1889), a native of Ballyshannon. The fine gateway to the east that retains an interesting lantern holder, the boundary wall, the elegant cast-iron railings and the derelict two-storey former sexton’s house (in use as a school c. 1860 – Valuations Office map) add considerable to the setting and context of this church. The present edifice is constructed on the site of an earlier Church of Ireland church (DG107-053004-) built in 1691. There is a grave marker dated 1681, commemorating a Jean Bannerman, which suggests that there may have been a church near prior to 1691.