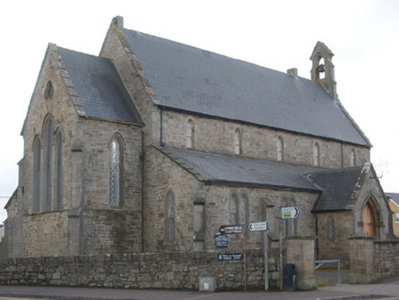 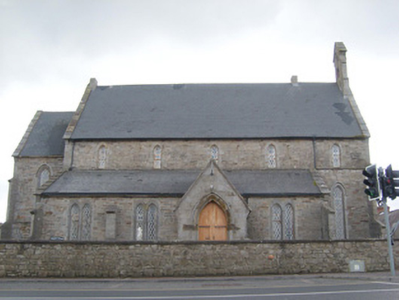 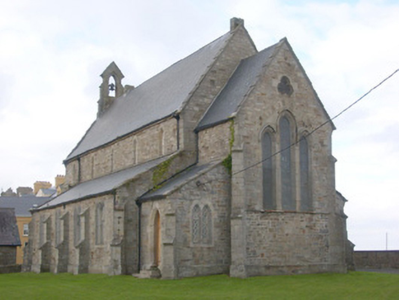 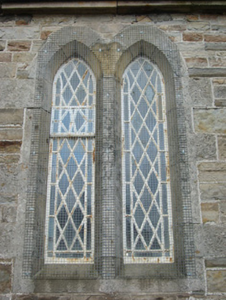 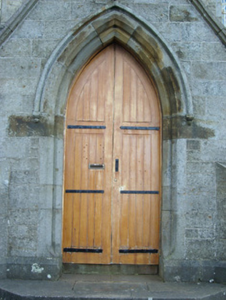 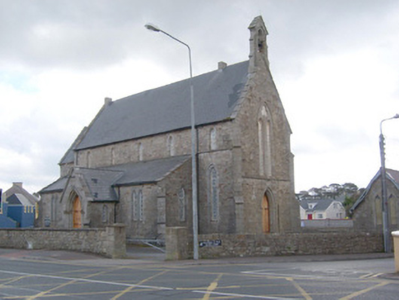 Detached Church of Ireland church, dated 1839, having five-bay nave elevations, four-bay side aisles to the north and south, gable-fronted entrance porch attached to the centre of the north aisle, and shallow single-bay projecting chancel to the west having single-bay lean-to vestry attached to the south side. Stepped cut stone bellcote over entrance gable (west) having gabled coping over and having pointed arch opening with bell metal bell. Pitched artificial slate roofs (fibre-cement) to nave, chancel and porch having feathered ashlar gable copings with moulded kneeler stones to eaves, and with projecting cut stone eaves course; lean-to slate roofs to side aisles and to vestry having feathered ashlar gable copings with moulded kneeler stones to eaves. Two ashlar sandstone chimneystacks, one to east gable end of nave and one towards the west end of the nave. Moulded cut stone trifoliated finial to the east gable end of nave. Some remaining sections of cast-iron rainwater goods. Snecked/broken coursed squared rubble sandstone walls over projecting chamfered ashlar plinth courses and having squared sandstone quoins to the corners; projecting cut stone stringcourses continuing line of aisles to the west end of the north and south elevations of nave, continuous sill course to chancel elevations (east and north), and to west elevation of nave (entrance gable). Clasping stepped diagonal ashlar buttresses to corners of nave, side aisles, chancel and vestry having moulded ashlar coping; clasping stepped ashlar buttresses between window openings to side aisles. Ashlar masonry to front face (north) of porch. Pointed-arched window openings having chamfered ashlar granite surrounds having cast-iron quarry glazed windows with margin panes. Paired window openings to side aisles and to the east elevation of vestry; three-graded pointed-arch window openings to chancel gable (east) having figurative stained glass windows (dated 1908) and with hoodmouldings over with decorative label stops, trefoil window over to chancel gable apex having chamfered ashlar surround; paired pointed-arch window opening having trefoil opening over to nave gable (west), all set in chamfered ashlar granite surround, and having hoodmoulding over having decorative label stops. Pointed-arch door openings to the nave gable (west) and to the north face of porch having moulded cut stone surrounds with moulded recesses, battened timber double doors with wrought-iron fittings, and having hoodmouldings over having decorative label stops. Pointed-arch door opening to the south face of vestry having battened timber door and chamfered surround. Interesting interior with alternating cross-braced and kingpost trusses, moulded chancel arch and cut stone pointed-arch arcades to the side aisles. Set back from road, at corner site, to the south-west of Bundoran town centre. Set in shared grounds with former school (40851016) located adjacent to the south-west. Site bounded on road-frontage to the west and east by roughly coursed stone boundary wall with roughly dressed rock-faced coping over; boundary wall to the north rebuilt. Gateways to either end of boundary wall to the north each comprising a pair of ashlar gate piers (on square-plan).

An elegant and well-composed mid-nineteenth century Church of Ireland church that retains its early form and architectural character. Well-maintained, it also retains its fittings including early quarry glazed windows that add to its architectural integrity. It is well-built using broken coursed sandstone and has good quality cut and dressed stone detailing throughout, particularly to the bellcote, the copings, the buttresses and to the openings. The use of pale polychromatic sandstone for the masonry/dimension stone and of crisp grey granite for the dressings to the openings creates a pleasing tonal and textural variation to the facades. The handsome bellcote helps to articulate the roofline, and is a landmark in the skyline along the main approach road into the town from the west. The form of this church is typical of mid-to-late nineteenth-century Church of Ireland churches in Ireland in that it has a bellcote rather than a tower (as found on earlier Board of Fruits churches), a shallow chancel and an entrance porch attached to one side of the nave. It is constructed in the Early English Gothic Revival architectural idiom, a style that was commonly adopted for Church of Ireland church building projects throughout Ireland during the first half of the nineteenth century. This creates a composition that harks back to the rural idyll of the medieval English parish church. The high spacious open interior also impresses, particularly the alternating cross-braces and kingpost trusses to the exposed roof structure, and the detailing to the arcades and arches. The fine figurative stained glass window to the chancel gable adds further decorative interest to the interior. These windows are attributed to the firm Heaton, Butler & Bayne of London, and depict ‘Christ as Bread of life’ to the north, ‘Christ Calming the Storm’ to the centre, and ‘Christ as True Vine’ to the south. They were donated by the Ellis family in 1908. This church was originally built by the Ecclesiastical Commissioners at a cost of £2,150 (IAA). It was built to designs by the architect William Hagerty (no dates), who worked in the offices of the Ecclesiastical Commissioners during the late 1830s. Hagerty was also responsible for the rebuilding of the Church of Ireland church at nearby Ballyshannon (40852016), built between 1839-42. The Early English Gothic style of this church is reminiscent of the many designs for Church of Ireland churches prepared by Joseph Welland (1798 - 1860), architect for the Ecclesiastical Commissioners (established 1833), where he had responsibility for all Church of Ireland building projects from c. 1843 until his death. The construction of a new Church of Ireland church in Bundoran, and one that is uncommonly large for a small town, is probably a reflection of the fact that Bundoran was a popular ‘genteel’ seaside resort at the time of construction, and would have witnessed an influx of visitors during the Summer ‘season’. This fine edifice is an important element of the built heritage and social history of Bundoran. It forms an appealing pair of related structures along with the former Church of Ireland school (40851016), located adjacent to the south-east. The simple boundary walls and gateways complete this composition, and add to the setting.