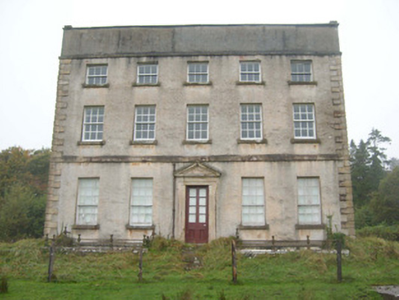 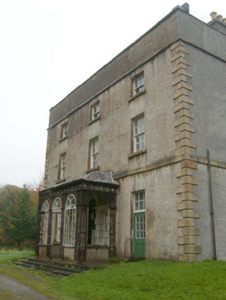 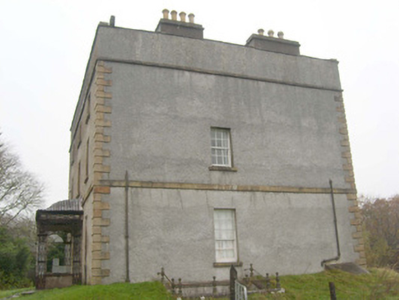 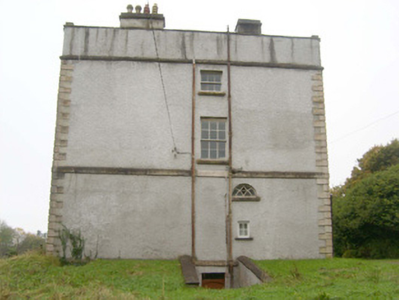 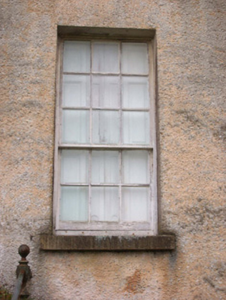 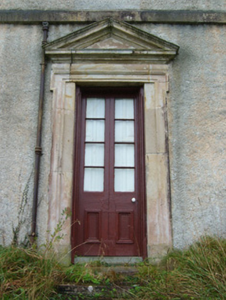 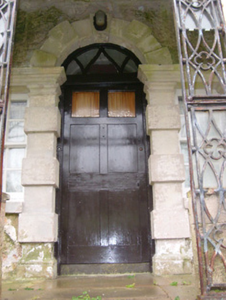 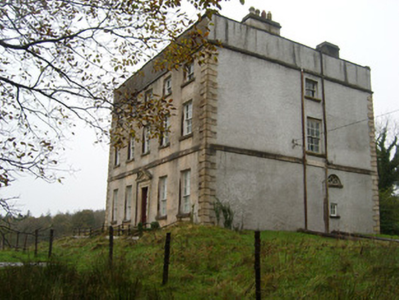 Detached five-bay three-storey over basement country house, built c. 1750, with projecting single-storey decorative wrought-iron entrance porch added to the north-west elevation c. 1810. Three-bay elevation to the north-west elevation. Double pitched natural slate roof, hidden behind raised roughcast rendered parapet having cut stone coping over, having cast-iron rainwater goods and rendered chimneystacks with terracotta pots. Hipped corrugated-metal roof to porch to north-west. Roughcast rendered walls having ashlar sandstone block-and-start quoins to the corners and plain raised ashlar sandstone stringcourses at floor level of the first floor and at eaves level, and with chamfered ashlar sandstone plinth course. Square-headed window openings with dressed sandstone sills, and having nine-over-nine pane timber sliding sash windows at ground floor level, six-over-six pane to first floor, and three-over-three pane timber sliding sash windows at second floor level. Horned timber sliding sash windows at basement level. Round-headed window openings to porch having metal multiple-paned windows, now largely broken. Central square-headed doorway to the south-east elevation having pedimented ashlar sandstone surround with lugged architrave, pulvinated frieze, replacement half-glazed timber double-doors, and flight of cut stone steps. Central round-headed doorway to the north-west elevation, behind later porch, having cut stone blocked Tuscan surround, timber door with glazed upper panels, and fanlight over, and with sidelights having pronounce cornices over. Former round-headed doorway to the south-east elevation having fanlight over. Cut stone plinth walls with cast-iron railings over to basement to front elevation (south-east), and to the south-west side elevation. Doorways at basement level to side elevations. Set back from road in extensive landscaped demesne/parkland grounds overlooking Donegal Bay to the south, and to the south/south-east of Mountcharles. Complex of outbuildings (see 40847024) to the north-east, former walled garden (see 40847026) to the north/north-west and with entrance gateway (see 40847023) and attendant gate lodge (see 40847022) to the north. Further gateway to the east of house comprising a pair of ashlar gate piers (on square-plan) having stepped capstones over, and with modern gates; gateway to the south-west of site and boundary wall to the south-east to south-west of site.

This impressive if rather stark mid-Georgian country house retains its original character and form. The classically-proportioned main elevations has graceful window openings that diminish in size from the ground floor to the high parapet, in contrast to the side elevations that are notable for the lack of openings. The austere main elevations are enlivened by the fine and elaborate doorcases, which are of high artistic merit, and to a lesser extent by the quoins to the corners and by the stringcourses. The round-headed quasi-Tuscan doorcase to the north-west elevation is flanked by square-headed sidelights with pronounced cornices over, which creates a Venetian arrangement that is characteristic of Palladian architecture in Ireland. This doorway is now partially screened by a charming wrought-iron porch, which was probably added during the first decades of the nineteenth century and is now sadly dilapidated. The elegant tall pedimented doorcase with lugged architrave surround to the north-west elevation may be a slighter later addition. This fine building forms the centrepiece of a large collection of related sites along with the complex of outbuildings (see 40847024) to the north-east, the former walled garden (see 40847026) to the north/north-west and with the entrance gateway (see 40847023) and attendant gate lodge (see 40847022) to the north, and is one of the more important elements of the built heritage of south County Donegal. This building was originally built for the Conyngham family, who had their main seat at Slane Castle in County Meath. The original construction date for The Hall is not known but it was in existence in 1777 (depicted on Taylor and Skinner road map of area when it was home to Right Honourable William Conyngham and possibly a Montgomery Esq.). There are hints in the Conyngham Papers (National Library of Ireland) that this building may have built around 1752/3 as there are records of ‘deeds of assignment’ advanced to Nathaniel Clements (1705 – 1777), a noted amateur architect and developer, particularly in the Dublin area in this period. 1753 was also the year that William Conyngham was advanced to the peerage of Ireland (Baron Conyngham of Mountcharles) and perhaps he built a new house around this time befitting his new status. The Conyngham family owned lands in the barony of Banagh (around Mountcharles) from 1704 at the latest (and possibly as early as the 1660s when Sir Albert Conyngham purchased lands in this part of Donegal) and owned lands in County Donegal from the Plantation period during the early seventeenth-century. The Conynghams were one of the largest landowners in Donegal by 1876 the third Marquis Conyngham and the wider family owned four separate estates in the county amounting to over 122,300 acres of land, as well as extensive landholdings in Clare (centred around Kilkee) and Meath (centred around Slane), and in Kent in the south-east of England. The Hall was the residence of a Colonel Pratt in 1837 (Lewis), a Charles W. Osbourne JP in 1881 (Slater’s Directory), and a James A. Pomeroy as well as the Marquis Conyngham in 1894 (Slater’s Directory), which suggests that the Conyngham family did not reside at The Hall during the nineteenth-century, or did some only for occasional periods.