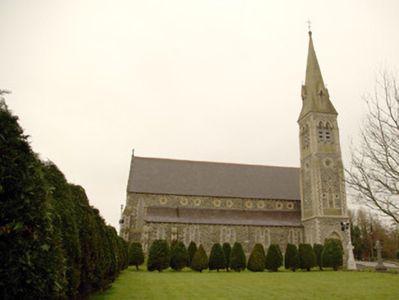 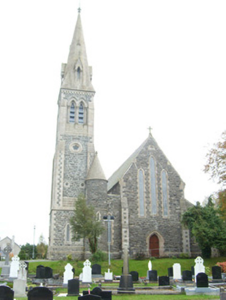 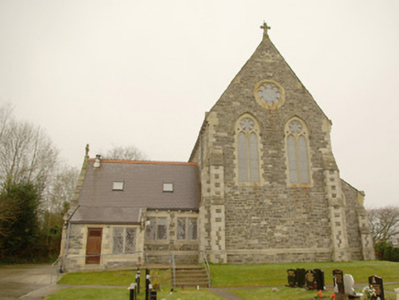 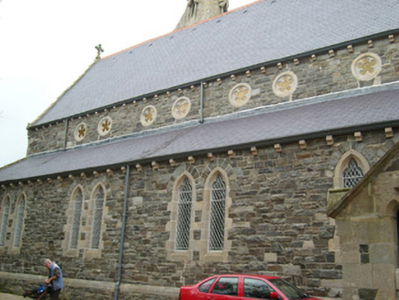 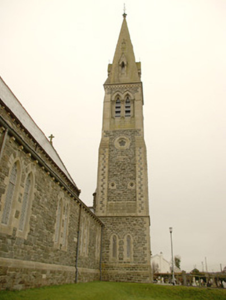 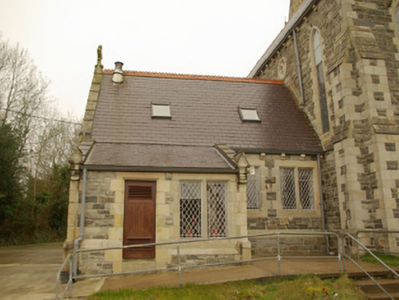 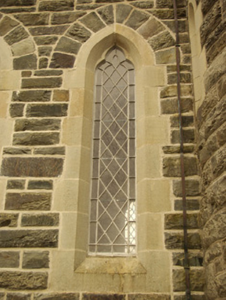 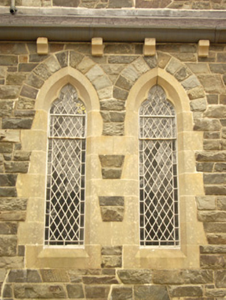 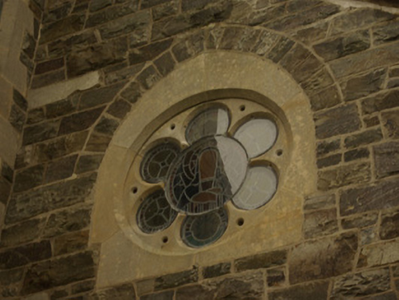 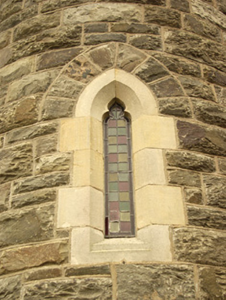 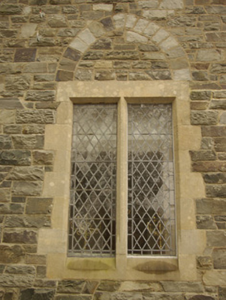 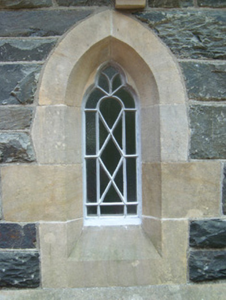 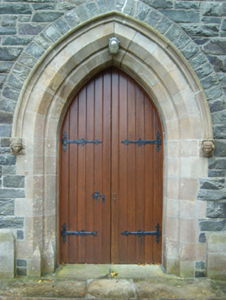 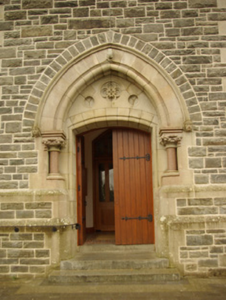 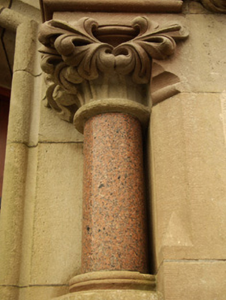 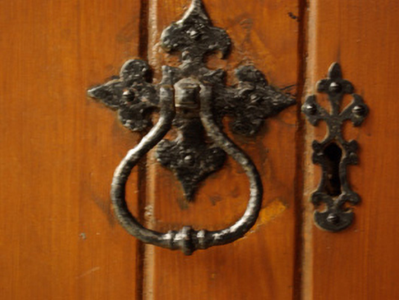 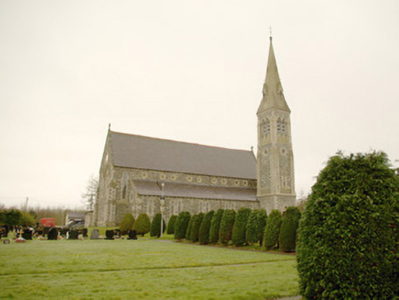 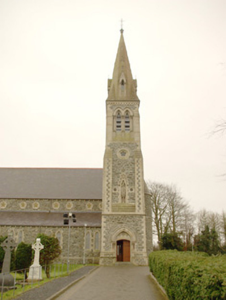 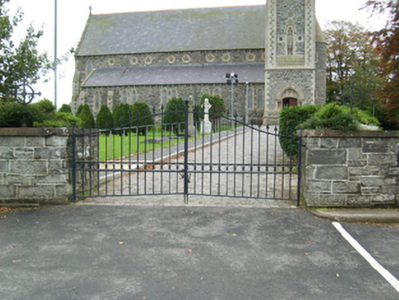 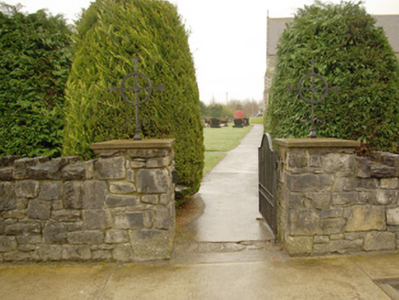 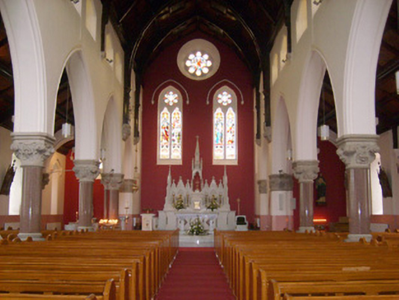 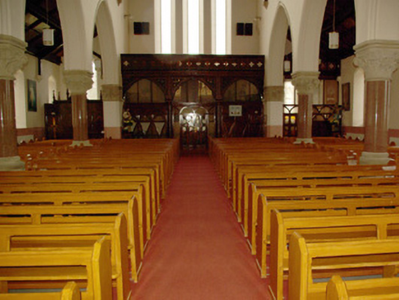 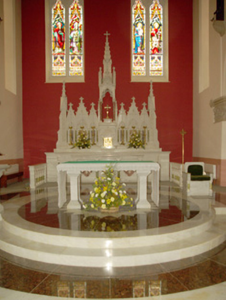 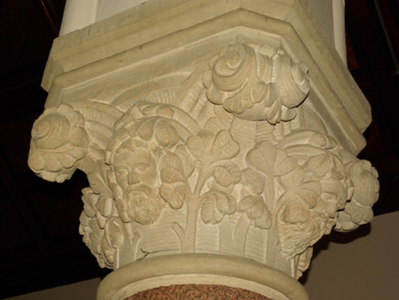 This ambitious and well-detailed late nineteenth-century Catholic church, displaying the highest standards of design and artistic endeavour, is one of the best examples of its type and date in County Donegal. The pointed-arched openings, steeply pitched roofs, tall belltower with spire, clerestory level with cinquefoil openings, and the architectural massing etc. lend it a robust late Gothic Revival character. Of particular note is the majestic belltower with soaring slender broached spire over, which is constructed of the highest quality ashlar masonry and which dominates the landscape for miles around in all directions. The semi-circular stair turret to one corner of the tower is another interesting and noteworthy feature that further distinguishes the exterior of this feature of the building. The main body of the church is built using good quality masonry, while the finely carved and crisp ashlar sandstone detailing, particularly to the wide variety of window and door openings, is of high artistic merit and helps to elevate this building further above the majority of its contemporaries in Donegal and, indeed, throughout Ireland. The contrast between the dark and mildly rock-faced dimension stone and the pale and smooth ashlar and cut sandstone detailing creates an appealing textural and tonal contrast to the building. The rich and spacious interior has been recently reordered but remains noteworthy for the flamboyant open roof structure that is richly detailed in a variety of different timber\wood types, the arcades of arches to the side aisles with polished pink granite columns surmounted by very finely caved capitals having deeply incised mainly foliate decoration that is clearly the work of highly skilled craftsmen, the complex wood carvings to the gallery, and by the spiky pinnacled white marble reredos behind the alter. The interior is brightly-lit by figurative stained glass windows, some of which is the work of the renowned German company Mayer and Company of Munich. This striking church was built to designs by the firm O’Neill and Byrne, a noteworthy architectural firm with offices in Belfast and Dublin that was in operation from 1868\69 until the death of one of the partners (John O’Neill) in 1883. This firm carried out many commissions for the Catholic church, mainly in Ulster, including the designs for St. Agatha’s church at Clar, near Donegal Town (see 40909404), built between 1869 - 71, and the Church of St. Finian, Falcarragh, built in 1877. It was built for the then parish priest, the Revd. Edward Boyle, foundation stone was laid on the 12th April 1872 and it was dedicated on the 25th of April 1875. The belltower and spire were part of the original designs but were not built until 1893 - 5\6, possibly due to financial considerations. Further works (unknown; possibly works on the sacristy) were carried out in 1903 to designs by Edward Toye (1857 - 1902), a noted ecclesiastic architect in his own right, for the then parish priest, the Very Revd. Bernard McLaughlin. The present church replaced an earlier Catholic church at Crossroads, which was a simple T-plan structure that was in existence in 1837 (Ordnance Survey first edition six-inch map), and which was located adjacent to the west of the present edifice. Lieutenant Wilkinson’s ‘Statistical Survey of the Parish of Donaghmore’ (1836) records that this church ‘was built in 1790 at an expense of about 800 pounds, by subscription from the congregation. It will hold about 900 persons.’ This church was later partially converted for use as a school (Ordnance Survey twenty-five inch map sheet of c. 1902) but is now demolished. The site of the old church to the west, and of the present edifice, is surrounded by a graveyard with mainly late nineteenth and twentieth-century gravemarkers, some of which are finely carved. This fine church is one of the more important elements of the built heritage of County Donegal, and is a landmark structure in the landscape to the south-east of Stranorlar.