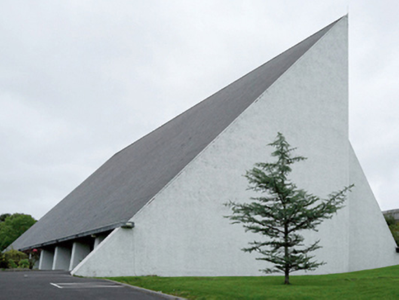 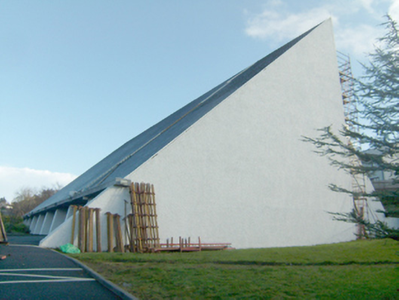 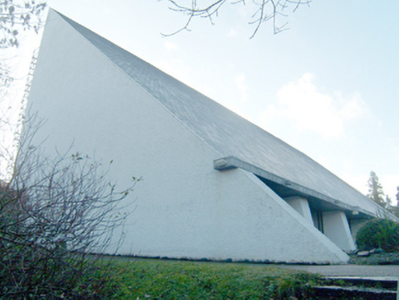 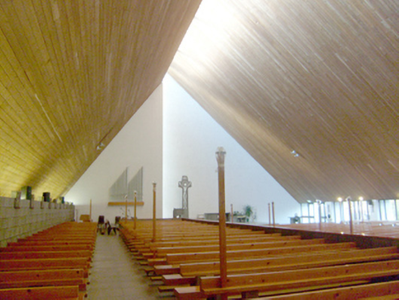 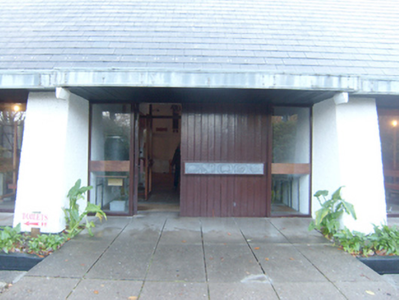 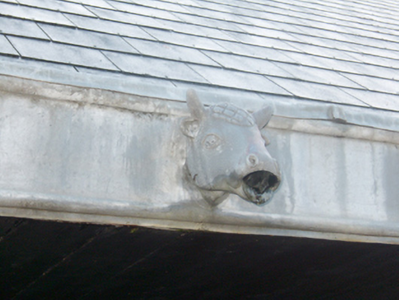 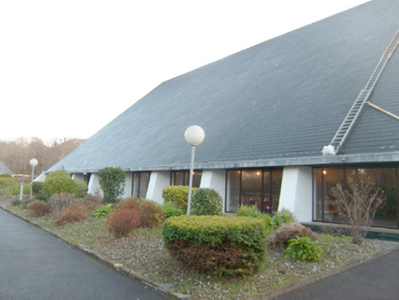 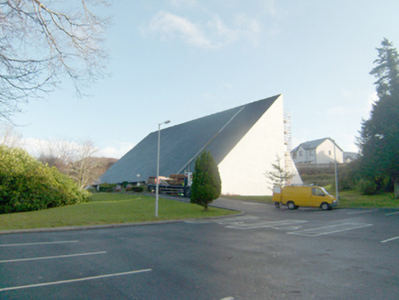 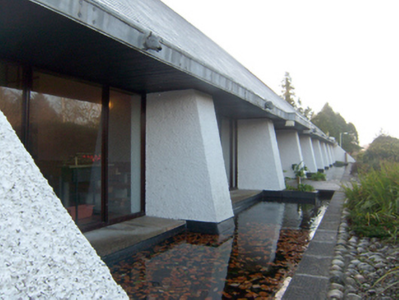 Freestanding Catholic church on complex-plan, built 1971-4, composed by two overlapping blocks (on rectangular plan) each having mono-pitched roofs with continuous clerestory windows at junction to ridge apex, and with main church and Blessed Sacrament chapel to either side of main entrance. Mono-pitched artificial slate roof with lead-lined box gutters having decorative gargoyles\water spouts, and with overhanging eaves having timber soffit. Painted roughcast rendered walls over smooth rendered plinth course, and with splayed roughcast rendered buttresses projecting between bays to the north-west elevation. Roughcast rendered walls to either end of building splayed to continue roofline. Square-headed openings with fixed-pane timber windows to the north-west elevation, aluminium fixed-pane windows at clerestory level, and with vertical strip windows to south-east elevation; some modern replacement windows. Square-headed doorway to the north-west elevation having battened timber doors with decorative horizontal leaded push-bars\friezes to centre having zoomorphic representations, and with flanked fixed-pane sidelights. Timber boarded ceilings to underside of mono-pitched roofs to interior, timber pews, carved monolithic Liscannor stone altar, celebrant’s chair and baptismal font, polished concrete floor slabs, organ, crucifix behind altar, exposed block work walls to higher level seating , plaster statues to the entrance foyer depicting St. Conall, Our Lady, and St. Colmcille. Set back from road in mature site to the south of the centre of Glenties. Shrubs and pathway to north-west and car park to the south-west. Water feature along north-west façade with bridge over serving main entrance. Tall steel feature at site boundary to the north-west having square-headed opening, and with crest of Diocese of Raphoe over entrance.

An influential contemporary church designed by architect Liam McCormick (1916-96) who is considered the father of modern Irish church architecture. It is the sixth of an important group of seven churches that McCormick designed in Donegal that together form perhaps the most important collection of their type and date in Ireland. The dramatic angular design for this church at Glenties marks a radical change in direction for McCormick compared to the curvilinear forms of his earlier churches, such as can be seen at Burt and Creeslough. It is constructed using a restrained pallet of modern building materials - roughcast render, concrete, timber, artificial slate, and glass, which creates an austere and bold composition. The broad open interior is similarly plain and austere with bare concrete block and white roughcast rendered walls, polished concrete floors, and boarded ceilings (western hemlock). This helps create a reflective space that is enhanced by the natural light the floods into the interior from the clerestory glazing at the junction of the roof apexes, and from the low-level windows to the north-west elevation that reflects light from the pool that runs the length of the building. This relationship between light and space in the building is significant, and is a feature of many of McCormick’s church commissions. This building demonstrates the contemporary architectural thinking on churches at the time (particularly in Europe, Swiss church architecture in particular) with simplicity of materials, use of new building technologies, minimal architectural decoration, use of natural light, and the use of modern art produced by individual artists as opposed to mass-produced copies of religious images. Like all of McCormick's church architecture, St. Conall's can be seen as a collaborative work with various Irish artists; the metal art work\friezes to the main doorway is by Imogen Stuart, and depicts various animals (including owl, tortoise, cockerel, hedgehog, and dove), while the same artist was responsible for the leaded rainwater outlets to the eaves over in the form of cows, sheep and goats, which feeds water into the pool that runs the length of the building; the planting along the pool was created by Florence Woods.; the plaster statues to the entrance foyer are by Nell Pollen and depict St. Conall, Our Lady, and St. Colmcille while the plaque to the foyer with Gaelic script is by Ruth Brandt; the large stylised crucifix behind the altar is by Imogen Stuart; the cast concrete Stations of the Cross with small timber crucifixes are by Nell Pollen; the baptismal font, altar and the celebrant’s chair, all carved from Liscannor stone, are by Michael Biggs; while the Blessed Sacrament chapel contains a tabernacle by Imogen Stuart. This church was designed to accommodate 700 worshippers and was built by John Hegarty & Sons of Buncrana who were responsible for the construction of four of McCormick’s churches in County Donegal. The cost of construction was some £150,000. It was dedicated on the 19th of May 1974 by Anthony McFeely, Bishop of Raphoe and an important patron of McCormick. The building received a commendation from the RIAI in its Triennial Gold Medal award for 1974-6. The present church replaced an earlier church at Glenties that was built in 1904-11 to designs by Edward J. Toye (1857-1932), an architect from Derry who worked extensively for the Catholic Church in Donegal. This church in turn replaced an earlier building dating to 1858 (with porch from 1866 to designs by Timothy Hevey), which in turn replaced a church of 1795. The church occupies the site of a house known as Stone Park, a house dating to the second half of the nineteenth century that is now demolished. Many of the mature trees to site formerly served this estate. This building formerly had a tall narrow bell tower\spire with a bell taken from the earlier Catholic church, a device often used by McCormick to link the old and the new at his church commissions. This church is considered amongst the most important modern churches in Ireland, and is an integral element of the built heritage of County Donegal. The prominent steel-arched gateway to the north-west completes the setting and context, and is an interesting addition to the streetscape to the south of the centre of Glenties in its own right.