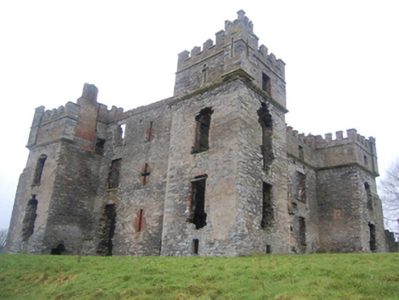 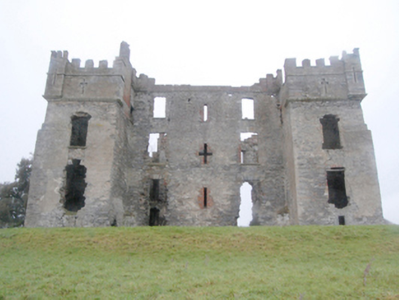 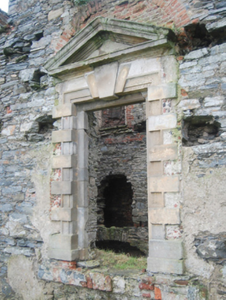 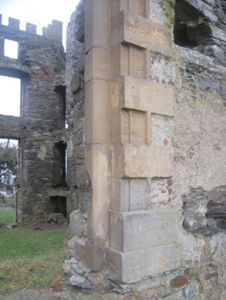 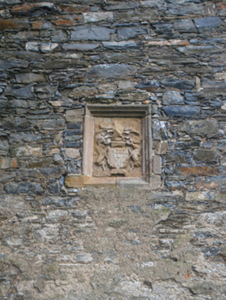 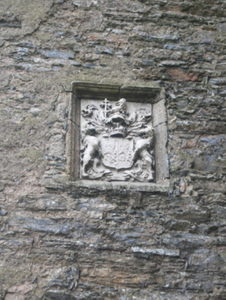 Detached five-bay three-storey over basement (four storey over basement to north) former bishop’s palace, built c. 1636-37 and altered c. 1695, c. 1740 and c. 1822, having full-height salient towers (on square-plan) to each of the four corners having bartizan projections to parapets of outer corners towers to the north-east and south-east towers having corbelled cut sandstone bases. Now ruinous and out of use (since being burnt in fire in c. 1838). Originally a lower building with upper storey or stories added c. 1740. Crenellated brick parapets in brick with cut stone copings over (some now missing). Red brick chimneystack with remains of roughcast lime render over to the inner face of tower to the south-west. Rubble stone walls with remains of roughcast lime render with limewash over (visible in sections) to exterior. Tooled cut stone (sandstone?) cornice stringcourse to towers above second floor level and to north elevation of main body of building above second floor level. Cut stone stringcourse to base of parapet. Blind cut stone cross loop motifs to parapets of towers; cut stone loops to bartizan towers. Cut stone armorial plaques (see RMP (DG070-003009-/010-/011-) to three of the salient angled towers; foundation stone (a jamb stone) to basement window to the east face of the tower to the north-east inscribed ‘IO LES--LAEVS EPS RAPOT IMVM POSVIT LAPIDEM 17 MAIII 1636 SVPREMVM 19 AVG 1637 TRANS-LAT SVAE 5°’. Square-headed window openings with some surviving cut stone sills; window fittings now gone. Loop and cross loop openings to central bays to some elevations. Gun loops to towers at basement level and to inner faces of towers at first floor level, some now blocked. Square-headed doorway to the east elevation, added c. 1740, having cut stone Gibbsian block-and-start surround with architraves, cut stone Gibbsian keystone, and with cut stone triangular pediment over. Square-headed doorway to the north elevation at basement level with cut stone surround with chamfered jambs and lintel. Brick construction to interior at basement level; brick-lined fireplace at basement level; cross vaulted brick construction to tower to the south-west; brick arches to entrance passage to the north-east tower. Set back from road in elevated site to the east\south-east of the Diamond, Raphoe, and to the south-east of associated Church of Ireland cathedral (see 40833001). Gateway (see 40833033) and former gate lodge (see 40833050) to the north.

Although now ruinous, this fine and impressive former Church of Ireland bishop’s palace, originally dating to the first half of the seventeenth century, retains much of its early imposing character and form. Located in an elevated location to the south-east of the centre of Raphoe, its brooding hulk is visible from a number of locations in and around the town. The turret-like towers to each of the four corners creates a castle-like composition that belies its original function as a clerical dwelling, and its fortified plan is similar to a number of Renaissance fortified palaces found in Italy. This building was originally built in 1636-7 by John Leslie, Bishop of Raphoe 1633-61. The fortified nature of the residence is implicit in Bishop Leslie's own description of it as 'Raphoe Castle', and the defensive character of the building is further reinforced by its prominent hilltop siting, protected on the north, west and south sides by steep slopes. The foundation stone (jamb stone) to one of the towers at basement level is inscribed ‘IO LES--LAEVS EPS RAPOT IMVM POSVIT LAPIDEM 17 MAIII 1636 SVPREMVM 19 AVG 1637 TRANS-LAT SVAE 5°’. The three armorial plaques (see RMP DG070-003009-/010-/011-) built into the exterior walls to three sides of the building are probably the coat of arms of the Leslie family. This building originally cost upwards of £3,500 to construct but the expense was apparently partly defrayed by leasing church lands in consideration of a grant towards its construction (Simmington 1937). It was held by Bishop Leslie during the Confederate Wars of the 1640s but was taken by Cromwellian forces in 1650 (Leslie 1929, 13; Rowan 1979). It was later burned by the Jacobites in 1688 and was subsequently repaired by Bishop Cairncross and his successors (Beaufort 1787, fol. 15). It was later altered during the mid-eighteenth century (probably by Bishop Nicholas Foster around the same time the tower was added to the associated cathedral (see 40833001) and the Old Royal School (see 4083304) was constructed c. 1740). The fine pedimented cut stone Gibbsian doorcase was added as part of these alterations. This doorcase is stylistically the same as the doorcase found at Lifford Courthouse (see 40835006), which suggests that the architect involved in the design of this courthouse, Michael Priestly (d. c. 1777), may have been responsible for the alterations to the bishop’s palace. Dr. William Bisset, shortly after his elevation to the see in 1822, improved the house by re-roofing and slating it and 'added parapet walls and gave it the appearance of a castle by adding minarets' (OS memoirs). The Palace was apparently destroyed by fire in 1838 (apparently deliberately burnt by a man who hoped to obtain a cheaper lease of the demesne if there was no residence on it) and has remained an imposing and impressive ruin ever since. There is evidence of a number of periods of alteration although it is still possible to identify much of the original structure. Some of the original seventeenth century windows are to be seen to the towers at basement level. There may have been originally similar but larger window openings to the upper storeys; these were subsequently enlarged to ‘modernise’ the building, probably during the eighteenth century when the need for a fortified dwelling diminished. It is possible that the original seventeenth century doorway is the doorcase with chamfered jambs and lintel that is built into the basement wall to the north elevation. The lintel of this doorway is carved with an escutcheon bearing the Leslie coat of arms and is surmounted by a mitre (probably the coat of arms of Bishop John Leslie). The original fortified house was four storeys in height (including basement level) with a gabled storey; the double outlines of the latter are visible to the north and south elevations. The fine cut stone stringcourses to the towers above second floor level suggest that these towers originally rose to just two storeys over basement, the upper floor with unusual bartizans added at a later date. The gables were subsequently truncated with the intervening spaces built up and the walls to the east and west elevation raised to accommodate semi-circular windows. These windows were later enlarged to their present rectangular shape by Bishop Bisset when he added the crenellated parapet and probably the corner turrets, c. 1822. There are a number of gun-loops (some now blocked-up) to the towers at basement and first floor level that provided flanking fire along all elevations and protecting the entrances. There was formerly a porch surrounding the Gibbsian doorway to this building and a range of structures adjoining to the north, now removed (Ordnance Survey first edition six-inch map c. 1837). There was also an obelisk and a number of ice houses to the south of the palace at this time. This imposing ruin forms part of an extensive collection of structures associated with the Church of Ireland at Raphoe, and is an important element of the built heritage of County Donegal. The gateway (see 40833033) and the former gate lodge (see 40833050) to the north adds to the historic context and setting of this site.