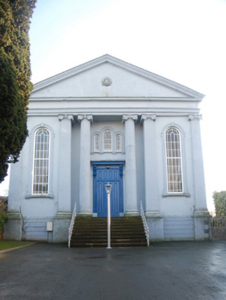 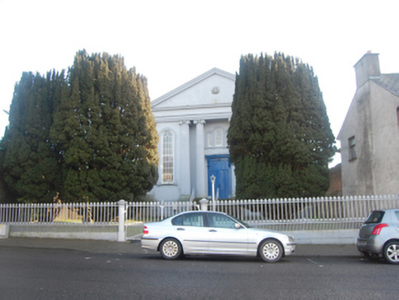 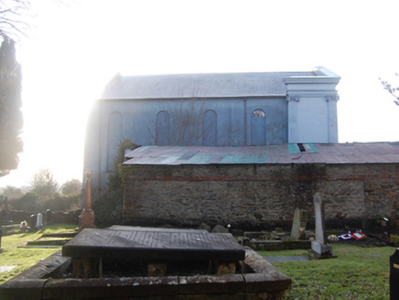 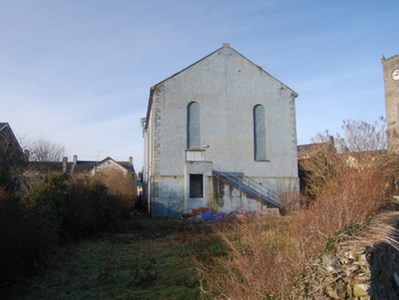 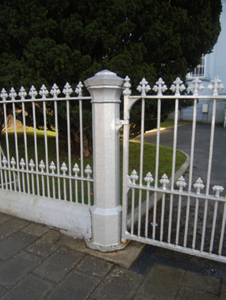 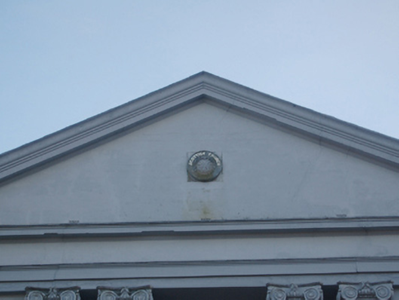 Freestanding three-bay two-storey former gable-fronted Presbyterian church, built 1860, having central portico in antis with two Ionic columns to front elevation (west), Ionic pilasters to either side of porch\portico and to corners of front elevation, and with pediment over. Four bay side elevations (north and south). Now in use as a sports hall (since 1949). Pitched artificial slate roof with raised smooth rendered pediment parapet having moulded rendered detailing to front (brought around the start of west end of side elevations), projecting cut stone eaves course to side elevations, and with raised cut sandstone verge to the rear (east). Rendered chimneystack to the gable apex to the east end. Some surviving sections of cast-iron rainwater goods. Medallion ashlar sandstone date stone to pediment having central circular motif with ‘Scottish Church’ and ‘erected 1860. Roughcast rendered walls to front elevation over channelled smooth rendered plinth with cut dressed sandstone capping over. Roughcast rendered walls to side and rear elevations over smooth rendered ruled-and-lined plinth\basement section with cut sandstone coping over. Ashlar sandstone block-and-start quoins to the corners of the rear elevation (east). Round-headed window openings to the outer bays of the front elevation having moulded architraved surround with keystone motif, timber fixed windows with coloured glass to margin panes, and stone sills supported on moulded brackets. Three graded round-headed window openings over doorway to recessed porch\portico having smooth rendered architraved surrounds, timber fixed windows with coloured glass to margin panes, and continuous stone sill supported on moulded brackets. Round-headed window openings to the side and rear elevations (now blocked). Square-headed window openings to the rear at basement\plinth level, now blocked (single eight-over-eight pane timber sliding sash window visible. Square-headed doorway to the centre of the front elevation having timber panelled doors flanked by timber pilasters with console brackets supporting timber canopy\entablature over. Doorway reached up flight of cut stone steps having ornate cast-iron railings to either side. Modern lamp post to start of steps. Set back from road in own site to the north-east corner of the Diamond to the centre of Raphoe. Mature yew trees and tarmacadam forecourt to front of site, modern fire escape to rear. Wrought-iron flat bar gate to the south side of building giving access to the rear. Bounded on road-frontage to the west by smooth rendered plinth wall with ornate cast-iron railings over. Rubble stone walls to the other boundaries of site with wrought-iron gate to the rear (east). Main gateway to the west comprising a pair of cast-iron gate posts on octagonal-plan and a pair of ornate cast-iron gates.

Although now converted to a new use, this fine mid-nineteenth century Presbyterian church retains much of its original character to the exterior. Of particular note is the elaborate classical entrance front with Ionic pilasters, Ionic columns, architraved surrounds to the window openings, and pediment over. This fine entrance front screens much more prosaic side and rear elevations, and helps give this building a strong presence overlooking the Diamond to the centre of Raphoe. This arrangement of a grand classical entrance front and plain ancillary elevations is a common feature of many nineteenth century Presbyterian churches and meeting houses, particularly in Ulster. This building also retains much of its early fabric including natural slate roof, fixed-pane windows with coloured glass and a fine panelled doorway flanked by timber pilasters with console brackets and crowned with an entablature canopy over. This church has much in common stylistically with the slightly later Presbyterian (see 40833017) church (first) on Meetinghouse Street to the west of the town centre. The yew trees to the front effectively screen the side elevations from the entrance front, perhaps a deliberate architectural ploy on behalf of the architect and\or builders etc. This building forms part of an interesting collection of churches of various denominations in Raphoe, which reflects the religious diversity in this part of Donegal. The presence of two large-scale Presbyterian churches in a small town such as Raphoe is indicative of the strong Presbyterian community in this part of Donegal, perhaps a remnant from Plantation times of the seventeenth century when this area was heavily settled by Scottish Undertakers and servitors etc. Raphoe is one of the earliest Presbyterian settlements of Ulster, although there was no church in the town until one was built in 1751 (on the site of the other Presbyterian church in Raphoe; demolished c. 1878). Presbyterians in the area went to worship in Convoy prior to the erection of this church. The Second Presbyterian congregation in Raphoe was formed following a dispute in the Presbyterian congregation during the ministry of Revd. John Thompson (1843-84) creating the First and Second Presbyterian churches in the town. The two Presbyterian congregations in Raphoe were later reunited in 1923, and this building at the Diamond eventually went out of use as a church in 1949, the congregation preferring to worship in the later Presbyterian church in the town. This church in the Diamond has been in use as a hall and sports hall since it ceased as a place of worship. This former church was originally built in 1860 to designs by the architect John Guy Ferguson (d. 1901). It opened it was opened for worship in September 1862, and apparently cost just over £1,000 to construct. Ferguson (from Derry) was also responsible for the Presbyterian churches at Buncrana and Moville (both 1862) and numerous commissions throughout Donegal from c. 1860, and was appointed as architect to the Church of Ireland Diocese of Raphoe and Derry in 1868. This fine building is an integral element of the built heritage and social history of Raphoe, and is a feature building in the centre of the town. The fine cast-iron gates and railings add to the setting, and complete this notable composition.