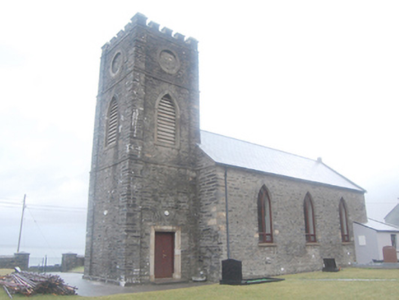 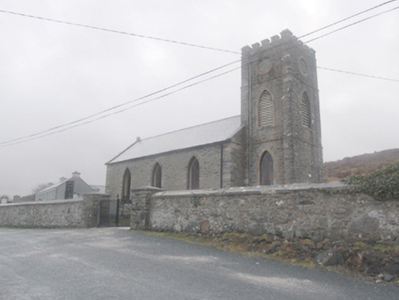 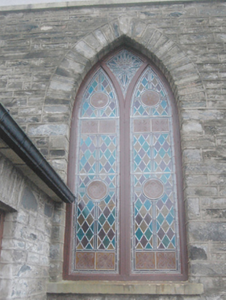 Freestanding Church of Ireland church, built 1825-8, comprising three-bay double-height hall with three-stage tower (on square-plan) attached to the west gable end, and with single-bay single-storey vestry attached to the south-east corner. Altered c. 1995. Pitched slate roof with ashlar eaves course brought around tower and side elevations as stringcourse, raised smooth rendered coping to gable ends, and with some surviving sections of cast-iron rainwater goods. Crenellated parapet to tower with leaded coping over, and with projecting cut stone stringcourse at eaves level. Pitched natural slate roof with clay ridge tiles to vestry to the south-east. Squared and coursed rubble stone walls with modern cement strap pointing, and with chamfered ashlar plinth course. Smooth rendered walls to the east gable end over stringcourse level (eaves), and to the south elevation of vestry. Squared and coursed rubble stone walls to tower with thin squared and coursed rubble stone pilasters to the corners, chamfered cut stone plinth course, and with cut stone stringcourses delineating stages. Pointed-arched window openings to the side elevations of nave (north and south) having stone sills, squared rubble stone voussoirs, and with replacement windows with Y-tracery. Pointed-arched window opening to the east gable end having stone sill, squared rubble stone voussoirs, timber Y-tracery, and with leaded stained glass window. Pointed-arched window opening to the north elevation of tower at ground floor\first stage level having stone sill, squared rubble stone voussoirs, ashlar surround(?) and with replacement windows with Y-tracery. Square-headed openings to the tower at belfry\second stage level having ashlar surround (?), cut stone sill, squared rubble stone voussoirs, and with timber louvered fittings. Blind roundel openings to tower at third stage level having ashlar surrounds. Square-headed doorway to the south face of tower having chamfered ashlar sandstone surround, ashlar plinth blocks, square-rubble stone voussoirs to relieving arch, and with replacement timber double doors. Square-headed openings to vestry and toilet block to the south-east having replacement fittings. Timber king roof structure and exposed rafters to interior. Set back from road in own grounds in the rural countryside to the north-west of Ardara, and overlooking Gweebara Bay adjacent to the north. Graveyard (on rectangular-plan) to site with collection of nineteenth and twentieth-century gravemarkers. Site surrounded by rubble stone boundary wall with cement rendered coping over. Gateway to the north having a pair of rubble stone gate piers (on square-plan) with pyramidal rendered coping over, and with a pair of metal gates.

This plain but appealing early nineteenth-century Church of Ireland church retains much of its early form and character despite some modern alterations, and is a landmark feature in the scenic coastal landscape to the north-west of Ardara. The pointed-arched window openings lend this building a muted Gothic theme that is typical of its type and date. The loss of the salient fabric to the majority of the openings, and some other modern alterations, fail to detract substantially from its visual appeal and integrity. Modest decorative interest is added by the leaded stained glass window to the east gable end, and by the subdued cut stone detailing (particularly the stringcourses and the ashlar surrounds to the openings to the tower). It is robustly constructed using local squared rubble stone masonry, and this building was almost certainly originally rendered. The unusual roundel openings to the top of the tower are a feature that helps to distinguish this building and give it a distinct appearance. The layout of this church is typical of the standard three-bay hall and tower church, which were built in large numbers, particularly between 1808-1830, using loans and grants from the Board of First Fruits (1722-1833). Lewis (1837) records that the church was built in 1825 at an expense of £900; this presumably came from the Board of First Fruits. The original architect is not known. The vestry to the south-east corner is probably a later addition, perhaps added in the second half of the nineteenth century. The graveyard contains a collection of mainly upstanding gravemarkers, some of which are of modest artistic merit. Located in the scenic coastal landscape overlooking Gweebara Bay to the north, this church is an integral element to the built heritage and social history of the local area. The congregation of this church would have swelled during the Summer months c. 1900 when the local area appears to have become a popular middle class seaside resort (unusual given the absence of a railway to the area). The simple rubble stone boundary walls to site, and the gateway to the north with rubble stone piers and metal gates, add to the setting and context, and complete this composition.