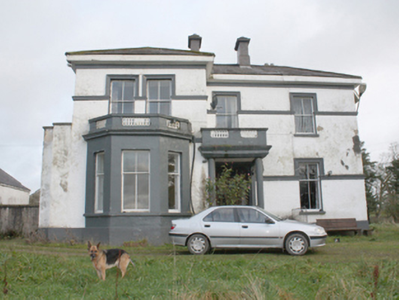 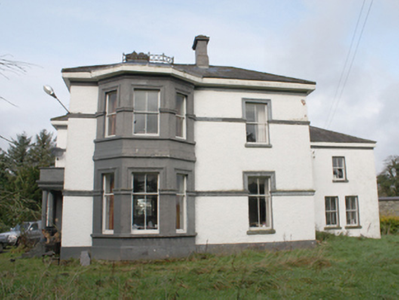 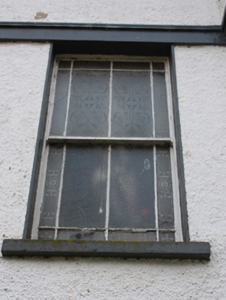 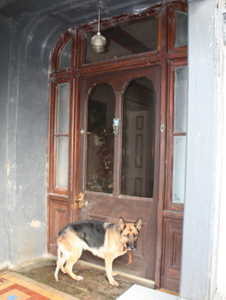 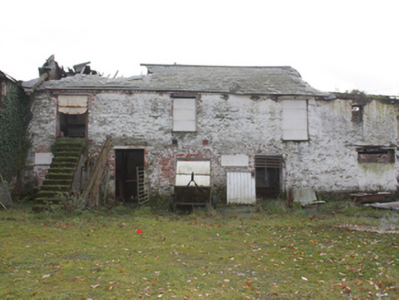 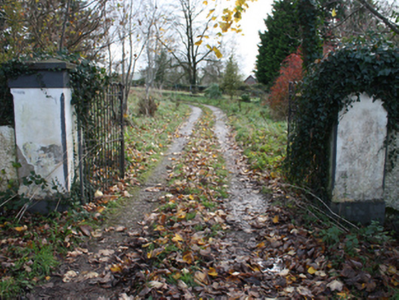 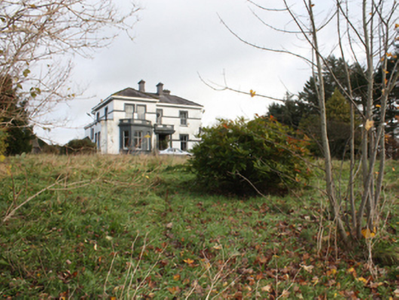 Detached three-bay two-storey house on L-shaped plan, built 1875, having advanced two-storey bay to the north end of the front elevation (west) having canted bay window at ground floor level with flat-roof over having balustraded parapet with inset decorative cast-iron railing, open single-bay porch to the centre of the front elevation (west) having balcony over with balustraded parapet having with inset decorative cast-iron railing, shallow projection to the north elevation having box bay window with paired window openings with raised parapet over having with inset decorative cast-iron railing, two-storey canted bay window to the south elevation having decorative cast-iron ridge cresting over, and with two-storey return to the rear (east). Low hipped natural slate roof having overhanging eaves with smooth rendered eaves course, central pair of stepped rendered chimneystacks with smooth rendered coping and polygonal pots over, and with stepped rendered chimneystacks with smooth rendered coping and polygonal pots over to the rear return and to the rear pitch of roof to the south. Rendered coping over box bay window to the north. No rainwater goods. Roughcast rendered walls over smooth rendered plinth course, smooth rendered walls to canted bay windows, and with smooth rendered moulded stringcourses at ground and first floor levels brought over top of window openings as architraved heads. Square-headed window openings with two-over-two pane horned timber sliding sash windows; single timber casement window and single eight-over-eight pane horned timber sliding sash window to west elevation. Segmental-headed door opening to porch having glazed timber panelled door flanked by sidelights and overlight, and with encaustic tiled threshold. addressed by concrete steps to east of porch. Set back from road in own grounds to the south-west of Carrigans, and a short distance to the north of the River Foyle and the former Carrigans Railway Station. Complex of ruinous two-storey outbuildings to the north-east having remains of (pitched?) natural slate roofs, partially rendered rubble stone walls, and with square-headed openings (now blocked). Gateway to the south-west of site comprising a pair of smooth rendered piers (on square-plan) having chamfered edges, smooth rendered plinth course and pyramidal coping, and with a pair of hooped wrought-iron gates.

This well-detailed and substantial two-storey house, of late nineteenth-century date, retains its original form and character. Its visual appeal and integrity are enhanced by the retention of salient fabric such as the natural slate roofs, timber sliding sash windows, and glazed timber doors. The attractive cast-iron railings over the bay windows to the north and front (west) elevations, and the cast-iron ridge cresting over the canted bay window to the south add some decorative interest. The front elevation is further enlivened by the moulded render stringcourses and eaves course, while the contrast between the smooth rendered walls to the canted bays and the roughcast rendered finish elsewhere helps to highlight these features. The prominent stepped rendered chimneystacks add incident to the roofscape. Interestingly, this building does not appear to have any rainwater goods. The irregular plan and form of this building, with a variety of projecting bays and a projecting porch, is a characteristic feature of many houses built by the middle classes throughout Ireland during the late Victorian period. This house was originally built in 1875 for a William J. Hanna, who returned from a period living in Philadelphia, United States, to live in Ireland. It was built to designs by the Derry-based architect William McElwee (c. 1844-1913). The builder involved was a Alex MeElwee also of Derry, and possibly a relative of the architect. The present house replaced and possibly incorporates part of an earlier house to site, which was extant in 1837 (Ordnance Survey first edition six-inch map of c. 1837). This fine building is an integral element of the built heritage of the Carrigans area, and is a feature of some aesthetic interest in the scenic landscape to the north bank of the River Foyle. The sadly ruinous complex of two-storey outbuildings to the north-east, and the gateway to the south-west of site with well-detailed gate piers, and attractive hooped wrought-iron gates, adds to the setting and context, and completes this appealing composition.