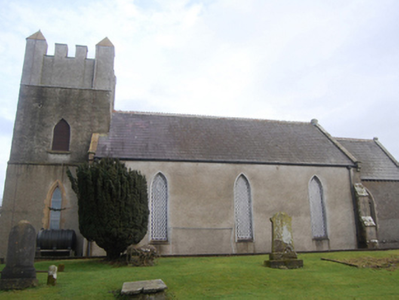 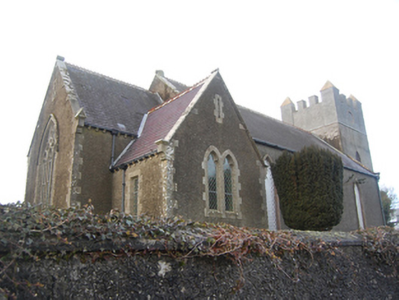 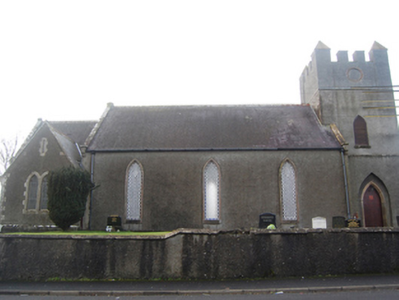 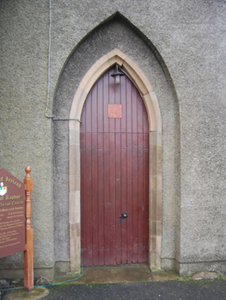 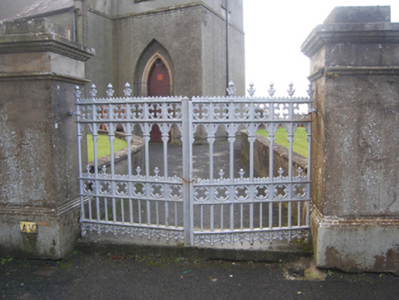 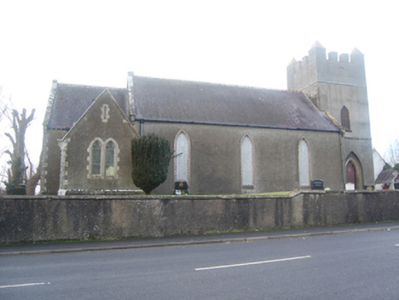 Freestanding Church of Ireland Church, built 1792 and extended in 1910, having three-bay nave, three-stage tower (on square-plan) attached to the north gable end, and with single-bay chancel, built 1910, attached to the south having single-bay gable-fronted vestry attached to the east elevation. Pitched natural slate roof having decorative perforated terracotta ridge tiles, raised ashlar verges to the gable ends (gabled to chancel and vestry) having moulded kneeler stones at eaves level and with ashlar finials over gable apexes, corbelled eaves course to chancel and vestry, and with some surviving sections of cast-iron rainwater goods. Roof to tower hidden behind raised crenellated roughcast rendered parapet with slightly projecting plinths (on square-plan) to corners of tower having ashlar sandstone pyramidal coping over. Roughcast rendered walls to nave over inset smooth rendered plinth; stepped clasping buttress to the south end of west elevation of nave having ashlar skews\coping over. Roughcast rendered walls to tower having cut stone stringcourses delineating stages. Roughcast rendered walls to chancel and vestry having flush tooled sandstone block-and-start quoins to the corners. Pointed-arched window openings to side elevations of nave having chamfered ashlar sandstone surrounds and sills, and with translucent glass diamond quarries in cast-iron frames with coloured glass rectangular margin panes. Triple-light window opening to the chancel gable south having cut sandstone Reticulated Gothic tracery (trefoil-headed panels with quatrefoils over), stained glass windows, ashlar block-and-start surround, and with cut stone hoodmoulding over. Paired trefoil-headed openings to east face of vestry having smooth rendered chamfered block-and-start surround and integral sill, and with leaded windows; Square-headed window opening to south face of vestry having smooth rendered chamfered block-and-start surround and integral sill, and with leaded window. Pointed-arch window opening to the west face of tower at first stage level having chamfered ashlar sandstone surround and sill, and with stained glass window. Pointed-arched openings over at belfry\second stage level having timber louvers; round motif with cut sandstone surround (former clock face?) to the east face of tower at third stage level. Pointed-arched doorway to the east face of tower having chamfered ashlar sandstone surround, and replacement timber door; doorway to the north face of vestry having ashlar sandstone surround and replacement timber door. Timber pews and decorative tiled floor to nave. Set back from road in elevated site to the south end of Manorcunningham. Graveyard to site with collection of recumbent and upstanding gravemarkers of nineteenth and twentieth century date (earliest dated 1803). Site surrounded by rubble stone boundary wall, roughcast rendered to road-frontage to the east. Gateway, c. 1910, to the north-east corner of site comprising a pair of moulded rendered gate piers (on square-plan) having moulded rendered capping, and with a pair of decorative cast-iron gates.

This attractive late eighteenth-century Church of Ireland church retains its early character and form, and is a landmark feature streetscape to the south end of Manorcunningham. Well-maintained, it also retains its fittings including early quarry glazed windows that add to its architectural integrity. The pointed-arched openings lend it a Gothic Revival character that is typical of its type and date in Ireland. The layout of this church is typical of the standard three-bay hall and tower church, which were built in large numbers, particularly between 1808 - 1830, using loans and grants from the Board of First Fruits (1722 - 1833). The plain nave elevations are enlivened by the simple ashlar sandstone surrounds to the openings while the stocky tower is lightened by the ashlar surrounds to the first stage openings , the cut stone stringcourse and the boldly crenellated parapet with unusual plinths to the corners with ashlar sandstone pyramidal coping over. Lewis (1837) records that ‘the church is a plain building, erected in 1792 at a cost of £646, of which £554 was contributed by the landed proprietors, and £92 by parochial assessment; the Ecclesiastical Commissioners have recently granted £167. 6. 4. for repairs’. Joseph Welland (1798-1860), architect to the Ecclesiastical Commissioners from c. 1821, may have been responsible for these ‘repairs’ that consisted of ‘interior alterations including rearrangement of sittings, reading desk and pulpit, semi-circular steps, and alterations to interior of tower entrance’ (IAA). The chancel and the vestry to the south end were added sometime between 1904 and 1910 (designs dated 1904 but works took place sometime afterwards) to designs by the Derry architect William Edward Pinkerton (1855 –c. 1914). These works are distinguished by the fine flush ashlar quoins to the corners and the ashlar surrounds to the openings. Of particular note is the complex window to the chancel gable with intricate Reticulated Gothic tracery. This window has fine stained glass windows depicting the Transfiguration by Curtis, Ward and Hughes of London; text to the lower panes indicates that it was installed in memory of John Mills of Listillion, given by his son John of Powerscourt, Maffra, Australia. The church was reopened and dedicated on the 28th of August 1910 following the construction of the chancel and vestry. The church is surrounded by a graveyard, which contains an interesting collection of upstanding and recumbent gravestones of mainly nineteenth- and-twentieth century date, some of which are finely carved and of modest artistic merit. The earliest of these is dated 1803 and commemorates Catherine Usher, wife of John Usher (died 1835) ‘Brotherly Fellow T.C.D. 36 Years Rector of this Parish. 22 Years Archdeacon of the Diocese’. Another gravemarker commemorates the Revd. William Archer Butler (died 1848). ‘Rector of this Parish. Late Professor of Philosophy T.C.D. The simple rubble stone boundary walls, and the elegant gateway to the northeast corner of the site with moulded rendered piers and intricate cast-iron gates (possibly of c. 1910) complete the setting of this church, which is an integral element of the architectural heritage and social history of the Manorcunningham area.