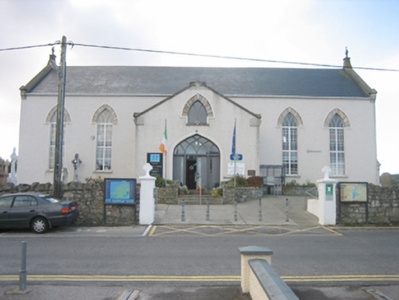 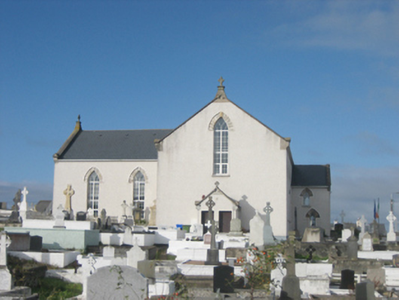 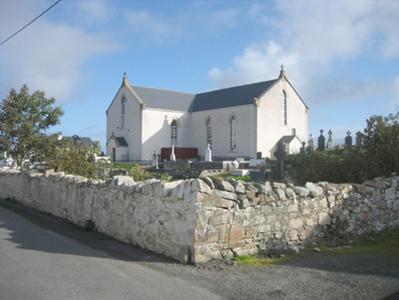 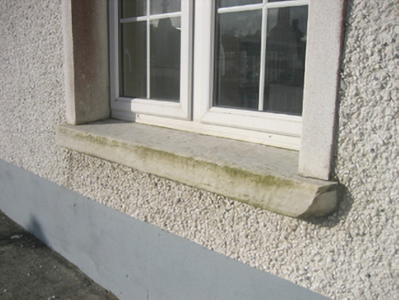 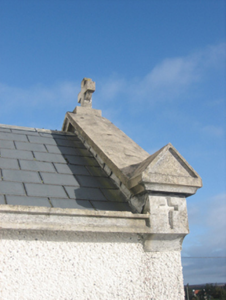 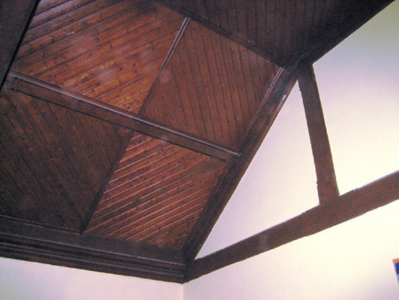 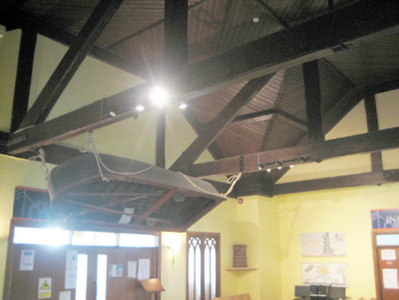 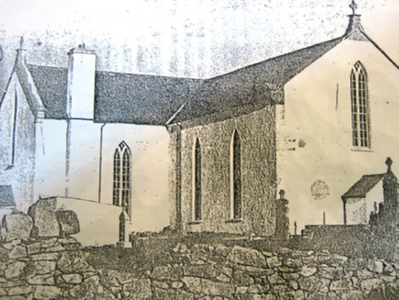 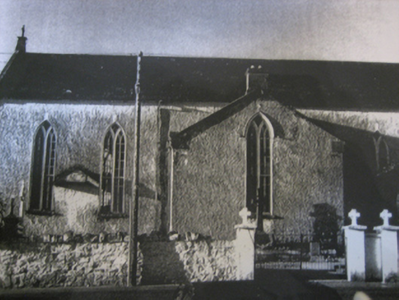 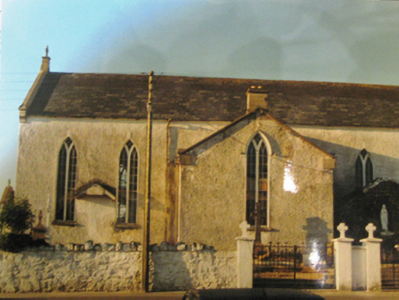 Freestanding double-height former Catholic church on cruciform-plan, built c. 1855-6 and altered c. 1895, comprising three-bay nave to south having single-bay single-storey gable-fronted entrance porch to the gable end, two-bay transepts to the east and west having single-bay single-storey entrance porches to the gable ends, and with projecting single-bay two-storey porch and sacristy(?) to the north. Now in use as a heritage centre, library and tourist office. Pitched slate roofs with raised concrete verges to gable ends having cross finials to gable apexes and kneeler stone detailing at eaves level with gable-fronted finials over, Celtic cross finials on pedestals to gable apexes of transepts, nave and projecting block to north, cut stone and rendered eaves courses, and with surviving sections of cast-iron rainwater goods. Pebbledashed walls over smooth rendered plinth course. Pointed-arched window openings with cut stone sills, raised smooth rendered surrounds, exposed squared rubble stone voussoirs, and replacement windows. Pointed-arched doorway to the north elevation of projecting to the north having smooth rendered surround, replacement glazed timber doors, and with overlight with modern Gothic tracery. Timber boarded tongue and groove ceiling exposed timber roof structure to interior; interior modified c. 2000 to accommodate change of use. Set back from road in an elevated site to the south end of Main Street, Dunglow (An Clochán Liath). Graveyard to site (on rectangular) having collection of gravemarkers of mainly late-nineteenth and twentieth century date. Site surrounded by rubble stone boundary wall with rubble stone coping over. Gateway to the north with smooth rendered gate piers (on square-plan) having cross finials over.

This plain but substantial mid nineteenth-century Catholic church retains much of its early form and some of its original character despite recent alterations to accommodate new uses. The recent loss of the early timber windows (originally paired timber sash windows with timber Y-tracery) detracts somewhat from its visual expression and integrity but suitable replacement could be reinstalled. The retention of the natural slate roof to the main body of the church adds a pleasing patina of age. The pointed-arch openings to the austere exterior elevations give it the bare minimum Gothic character that is typical of its type and date. The raised verges to the gable ends with Celtic cross and cross finials to the gable apexes, and kneeler stones to the eaves creates some interest at roofscape level. This church was originally built in 1855-6 by the Revd. John O’Donnell, the then parish priest of Lettermacward and Upper Templecrone. The foundation stone was apparently laid on the 2nd of July 1855 and it was opened for service on the 20th of July the following year. It was built by and paid for largely by local parishioner; and an early account records that the parishioners 'raised the stones, supplied the lime, and attended the masons, the cost of the building has been very moderate-namely £693 6s. 8d. When it is borne in mind that there were only 350 families to contribute to the building of the church, and that no external aid was obtained, save £80 from the inhabitants of Letterkenny, the pastor’s native town, £20 and £10 from the town of Donegal, great credit is due to the poor but generous people of Upper Templecrone, who so largely assisted and contributed to the erection of such a beautiful structure in one of the wildest and most remote districts of Donegal’. Works were carried out here in 1895 to designs by Edward J. Toye (1857-1932), an architect from Derry who worked extensively for the Catholic Church, and was responsible for a number of churches in County Donegal, including those at nearby Burtonport (see 40904801), at Ardara (see 40836003), Mountcharles (see 40847017), Glenties, and Bruckless (see 40909801). The main contractor involved in the works to the church in Dunglow was a J. Fadden, of Derry, at an estimated cost of £440. The nature of these works are not known but may have included the timber boarded ceiling. This church was built on the site of an earlier church that was apparently constructed in 1781 during Penal times. This church was a simple hall-type building (Ordnance Survey first edition six-inch map of c. 1835) and was described by Lewis in 1837 as a plain slated chapel. The present church was a place of worship for over 130 years before it was closed c. 1980 following the construction of a new Catholic church in Dunglow (An Clochán Liath). Although altered, this modest church is an integral element of the social history of Dunglow (An Clochán Liath), and is a landmark feature in the streetscape to the south of the town centre. Sensitively restored, it would represent an element of the built heritage of the local area. The simple rubble stone boundary walls and graveyard to site add to the setting and context, and complete this composition.