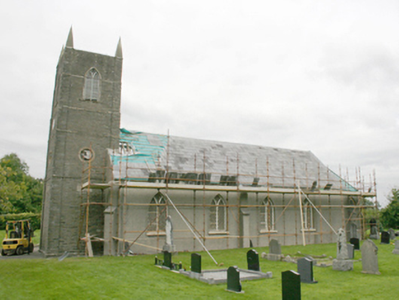 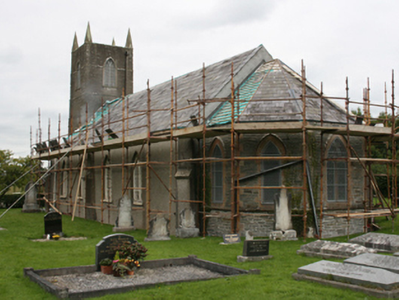 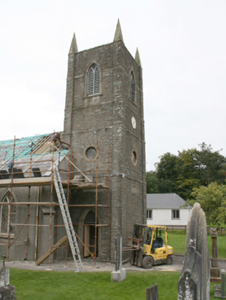 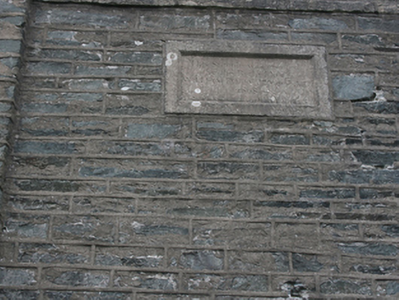 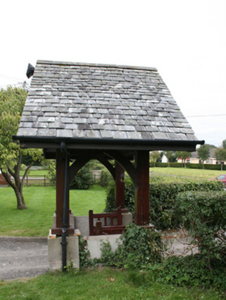 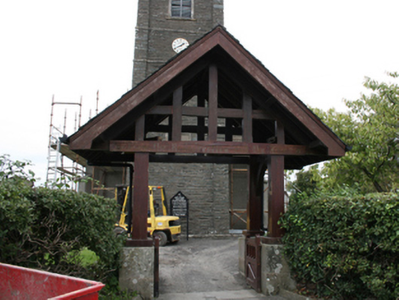 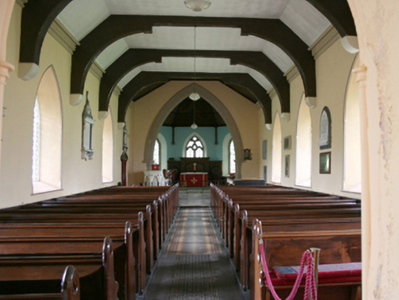 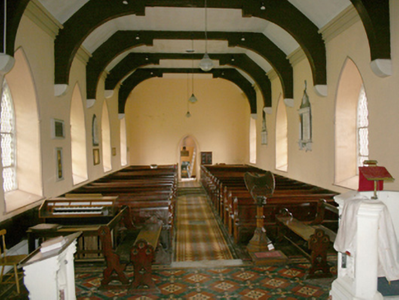 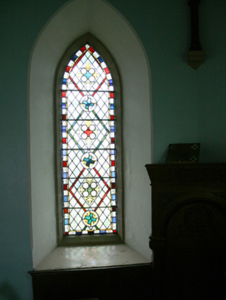 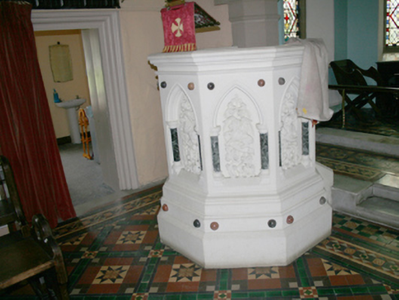 Freestanding Church of Ireland church, built 1722 altered internally in 1846, and extended in 1808 and in 1896 or 1910, having four-bay nave with four-stage tower (on square-plan) to the west (added 1808) having corner pilasters rising to cut stone finials over, single-bay single-storey vestry (possibly added in 1846) to the north-east corner of nave, and with polygonal chancel attached to the east (added c. 1896 or 1910). Pitched natural slate roof to nave with projecting ashlar eaves course, replacement rainwater goods; hipped natural slate roof to chancel with leadwork to ridges. Roughcast rendered walls to nave with three stepped clasping buttresses to south elevation and one to the north elevation (diagonally-set to ends of nave) topped by feathered dressed stone copings. Coursed rubble stone construction to tower with projecting stone stringcourses delineating stages, three inscribed plaques at first stage\ground floor level, clockface (on circular-plan) to the west elevation of tower at third stage level, blind oculus\roundel motifs having cut stone surrounds to the tower at second stage level. Rubble stone construction to apsidal chancel having flush sandstone block-and-start quoins to the corners; continuous sill course to chancel. Pointed-arched window openings to side elevations of nave having smooth rendered reveals, stone sills, cast-iron quarry-glazed windows, and with timber Y-tracery. Pointed-arched window openings to nave having chamfered ashlar sandstone block-and-start surrounds and sills, leaded stained\coloured glass windows, and with cut stone hoodmouldings over; curvilinear\flowing cut stone tracery to window opening to centre of chancel. Pointed-arch openings to tower at fourth-stage\belfry level having timber Y-tracery and timber louvers. Pointed-arched doorway to the north face of tower having chamfered staged cut stone surround, battened timber door, and with leaded overlight with painted and coloured glass panels. Pointed-arched door opening to vestry having battened timber door. Marble wall memorials to interior, including one dated 1770; timber hammer beams supported on stone corbels and plain plaster ceiling to roof, timber pews and wainscoting, pointed chancel arch having ashlar surround with engaged columns to base, carved stone baptismal font, marble pulpit (on octagonal-plan) having carved marble panels in relief to faces, encaustic tiled floor. Set back from road in own grounds to the east end of Newtowncunningham. Graveyard to site with mainly upstanding gravemarkers of nineteenth century date. Fence and hedging to site boundaries. Gateway to the west of site having timber lychgate, erected 1920, having pitched natural slate roof over.

This plain but appealing Church of Ireland church retains its early form and character. It also retains much of its early fabric including quarry glazed windows with Timber Y-tracery, while the pointed-arch openings lend this building a muted Gothic theme. The cut stone detailing to the openings to the later apsidal chancel adds some artistic interest and are clearly the work of skilled masons. The stone construction to this chancel contrasts attractively with the earlier nave with its plain roughcast elevations and simple window openings. The form of this church conforms to typical Board of First Fruits (1711 - 1833) hall and tower form that can be found in great numbers throughout the Irish countryside. This church was originally built as a simple hall-type chapel of ease to the church at Taughboyne, and it was originally consecrated in 1722 although it was apparently not opened until 1728. The stocky rubble stone tower with cut stone stringcourses and corner pinnacles was added in 1808; a cut stone plaque to the tower records that was built by William Forward, later third Earl of Wicklow, of nearby Castleforward\Castle Forward (now demolished). This tower is a local landmark, marking the east end of the straggling town of Newtowncunningham. The cut stone surround to the doorway, and the roundel openings at second stage level (possibly originally clock faces), add some decorative interest to this tower. It is likely that the cast-iron quarry-glazed windows to the nave were added at this time also (1808). The interior was refitted in 1846 to designs by Joseph Welland (1798-1860), architect to the Board of First Fruits and subsequently to the Ecclesiastical Commissioners where he had sole responsibility for all Church of Ireland building projects from 1843. This 1846 refitting involved the installation of new seating and the probable addition of the vestry. The well-detailed apsidal chancel with cut stone surrounds, intricate curvilinear\flowing cut stone tracery to the central window, and stained glass windows, was added in 1896 (although some records date this addition to 1910, although appears to be depicted on Ordnance Survey twenty-five inch map of c. 1900). The simple interior is notable for the hammerbeam roof, the ashlar chancel arch, the colourful encaustic tiled roof, and the elaborate marble pulpit with carved detail if relief. The interior also contains an interesting collection of classical wall memorials, a number commemorating the Forward family (Earls of Wicklow) of nearby Castleforward\Castle Forward (now demolished). The earliest of these (form of a cupid’s head with oval plaque over) is to William Forward (died 1770), and was carved by Richard Kelly of Dublin. Others memorials to the Forward family include an elegant monument in the form of a Tuscan aedicule (Eleanor Forward, d. 1807), a plaque with carved coat of arms (Second Earl of Wicklow, d. 1815). The entrance to the site is marked by a charming timber lych gate with natural slate roof over. This feature was added in 1920 and is dedicated to the memory of the Revd. A. G. Stuart of nearby Bogay House. Lychgates are unusual features in Ireland but are commonly found in late Medieval church sites in England. Lychgates have a symbolic function as the (covered) point where coffins were traditionally met by a clergyman on entrance to the churchyard, and the word 'lych' has its origins in Old English and means 'corpse'. This feature adds significantly to the setting of this church, and is an important element of the built heritage of Newtowncunningham in its own rights. This church building forms part of a group of related structures along with the possible former rectory to the north (see 40824002). The graveyard to site contains a collection of mainly nineteenth century gravemarkers, some of modest artistic interest; this graveyard to site completes the setting of this church, which is an integral element of the architectural heritage and social history of the local area.