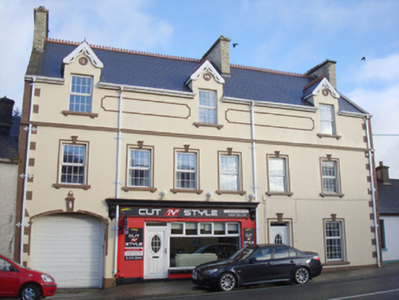 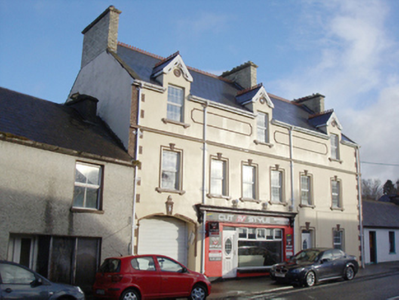 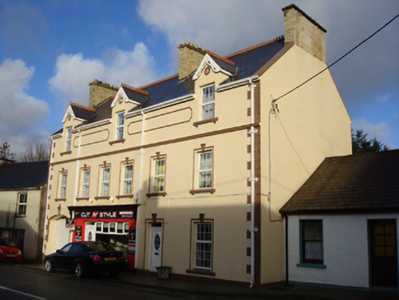 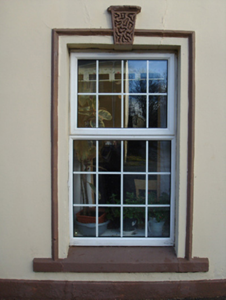 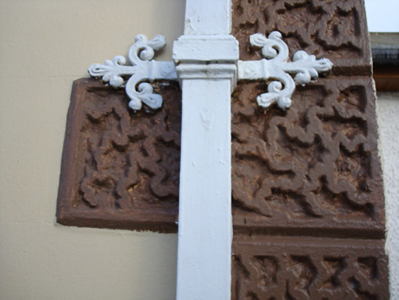 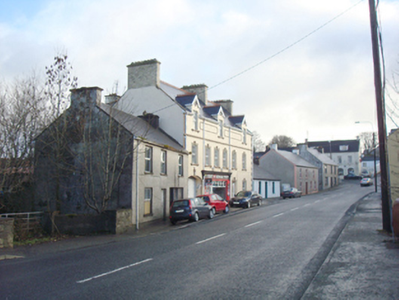 Attached six-bay two-storey house and shop with half-dormer attic level, built 1898, having integral segmental-headed carriage-arch to the north-west end of the front elevation (south-west), and with two-storey return to the rear (north-east). Now in use as a shop and as a dwelling. Pitched natural slate roof having decorative fleur-de-lys terracotta ridge tiles, raised rendered verges to gable ends (north-west and south-east), and having three yellow brick chimneystacks (one to either gable end and one to the centre) having cornice coping and clay pots over. Three half-dormers to front elevation (south-west) having pitched natural slate roofs decorative fleur-de-lys terracotta ridge tiles, and with decorative timber bargeboards. Decorative cast-iron downpipes with decorative cast-iron brackets. Smooth rendered ruled-and-lined walls over projecting smooth rendered plinth course, vermiculated block-and-start quoins to the corners of the front elevation, smooth rendered stringcourse over first floor openings, and with two panels with moulded surrounds at second floor level. Three decorative smooth rendered circular panels, one over window opening to each half-dormer, having raised lettering reading ‘S’, ‘1898’ and ‘B’. Square-headed window openings at ground and first floor level having moulded render surround with decorative vermiculated keystones over, painted stone sills on brackets, and with replacement windows. Square-headed window openings to half-dormers having painted stone sills on brackets, and with replacement windows. Square-headed door opening to the south-east of shopfront having moulded render surround with decorative vermiculated keystone over, and with replacement door. Integral segmental-headed integral carriage arch to the north-west end of front elevation having flanking stucco colonnettes and surround to head with central decorative vermiculated keystone incorporating initials ‘S B’ over, and with modern metal shutter. Two-bay shopfront to the centre having modern infilled shopfront with square-headed door and window opening, smooth rendered fascia panel with decorative stucco stringcourse to base, and having decorative stucco cornice over supported on decorative stucco foliate console brackets to either end and with ball finials over on vermiculated pedestals. Road-fronted to the north-west end of the centre of Kilmacrenan with two-storey building adjoining to north-west and single-storey building adjoining to the south-east.

This impressive large-scale building, dating to the very end of the nineteenth century, retains much of its early form despite some alterations. This building is the most impressive in the streetscape of Kilmacrenan, which is marked by small-scale mainly single- and two-storey buildings, and has a strong presence to the north-west end of the centre of the village. Its front elevation is enhanced by the extensive decorative elements including surrounds with vermiculated keystones over to the ground and first floor openings, the surround to the carriage-arch, the decorative panels at second floor level, the cast-iron downpipes with intricate cast-iron brackets, and by the roundel motifs to the half-dormer openings. The shopfront remains an impressive stucco cornice over the fascia panel supported on elaborate console brackets with decorative ball finials over, which is among the most attractive examples of its type still extant in County Donegal. However, the loss of the original fittings to the openings and the infilling to the shopfront detract from the visual appeal and integrity. However, suitable replacements could easily be reinstalled. The prominent yellow brick chimneystacks and decorative terracotta ridge cresting add interest at roofscape level, and helps to provide some vertical relief against the elongated facade. The initials ‘S’ and ‘B’ to the dormers and the keystone to the carriage-arch are the initials of a Samuel Burns, the individual who established this premises at the end of the nineteenth century. Slater’s Directory of 1894 records that Samuel Burns ran a grocery and ironmongers at this time, presumably in another building close to or on this site (There is no mention of Burns in Slater’s Directory of 1881). Burns was obviously a successful merchant and business man to have the finances to originally construct this building. He is recorded as a general grocer in the 1901 consensus when he was aged 36. This building (in the form of town house with commercial premises on the ground floor) is of a type that was, until recent years, a ubiquitous feature of the streetscapes of Irish towns and villages but is now becoming increasingly rare due to insensitive alteration and\or demolition. Although altered, this building is a landmark feature in the streetscape of Kilmacrenan, its decorative features adding incident to the streetscape, and is an addition to the built heritage of the local area.