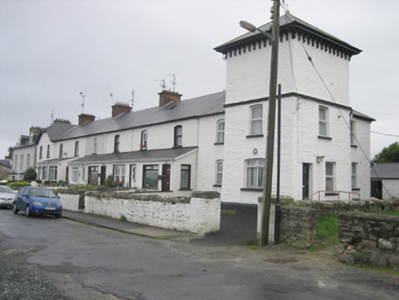 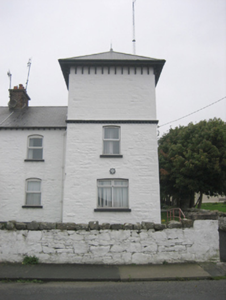 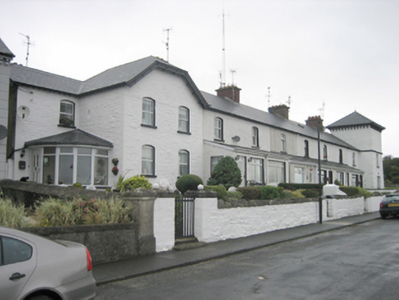 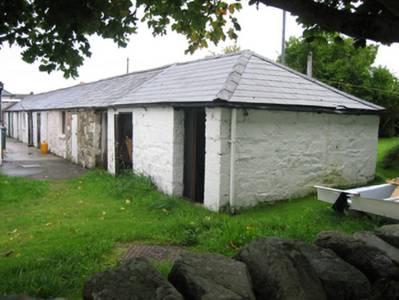 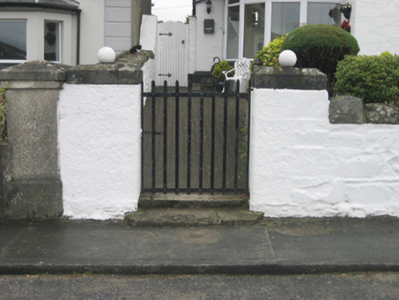 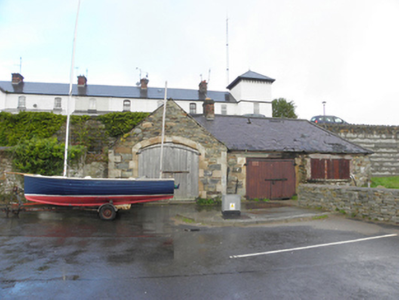 Although altered and now in alternative uses, this former coastguard station, dating to the second half of the nineteenth century, retains much of its early form and character. The construction of single-storey additions to the front elevations of the central houses detracts somewhat from its integrity. The loss of most of the original fittings to the openings also detracts but suitable replacements could easily be reinstalled using surviving examples as templates. It is well-built using local rubble stone masonry while the good quality ashlar quoins to the corners is testimony to the skill of the masons involved and help give this built a robust, almost military appearance. Of particular visual appeal is the mildly battered three-storey tower to the north end, a feature of many contemporary coastguard stations built along the Irish coastline that were constructed to common designs by the Board of Works. This probably originally had viewing platforms to the north and east sides (now removed) commanding views over Kerrs Bay and Lough Swilly to the east. The corbelled eaves course and the dogtooth stringcourse to the tower adds some ornament to this otherwise functional structure. This tower formerly had machicolated oriel windows to the north and east faces at third storey level (historic photograph), now removed; these were a feature of many contemporary coastguard stations. The house to the north end with the tower and the three-bay two-storey house to the south end were probably originally in use as the inspector and chief boatman’s residences, the single-bay single-storey houses between were originally the coastguards houses. This coastguard station was originally built to designs by Enoch Trevor Owen (c. 1833-81), an English architect working for the Board of Works in Ireland from c. 1860. Owen designed upwards of thirty coastguard stations in Ireland, mainly during the 1860s and early 1870s, including nine in County Donegal. The form of this building is typical of many of Owen’s coastguard station designs. This building was originally built in 1875, and the main contractor involved was a Matthew McClelland. The present coastguard station replaced and earlier station at Rathmullan, which was extant in 1837 (Ordnance Survey first edition six-inch map); this was located adjacent to the north-east but is now demolished. The Coastguard Service was established in Ireland (and Britain) in 1822, and its main purposes were controlling smuggling (the evasion of the payment of revenues) and in rescuing seafarers etc. Coastguard stations were built at intervals of ten to twenty miles all along the coastline. The coastguard service later passed into the control of the Admiralty in 1859 who initiated a large-scale programme of coastguard station-building in Ireland, and this building in Rathmullan dates to this period of expansion. A Capt. Duthie was the Inspector and a Henry Elliott the chief boatman here in 1881 and a Lieutenant C.G. Prater the Inspector and a Cornelius O’Neill the chief boatman here in 1894 (Slater’s Directories). This building probably went out of use as a coastguard station shortly after Independence, which was the fate of many buildings of this type in Ireland. This building is an important element of the built heritage and maritime history of Rathmullan, and is an appealing feature along the coastline to the north-east of the town. The sheds to the rear, the boundary walls and gateways to the east, and the attractive former boathouse (see 40819033) and attached outbuilding to the east complete the setting and add significant to the context.