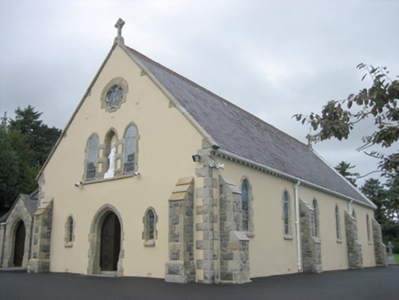 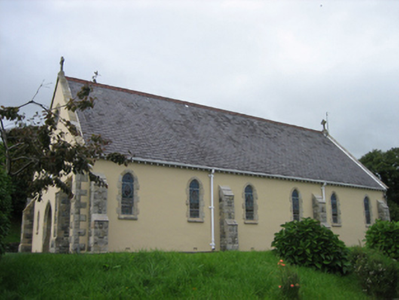 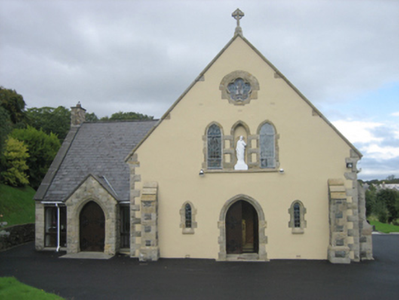 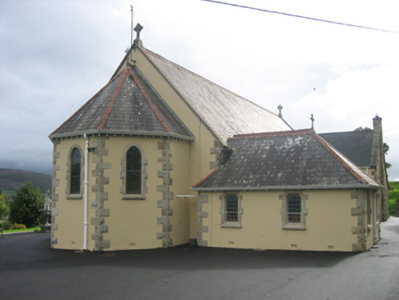 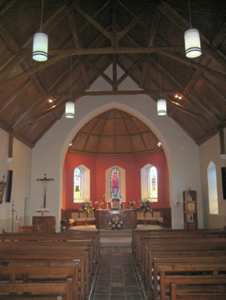 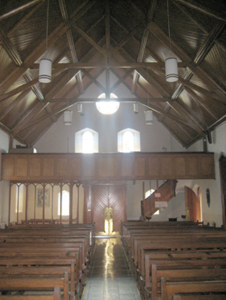 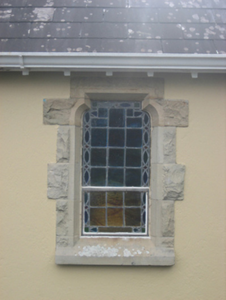 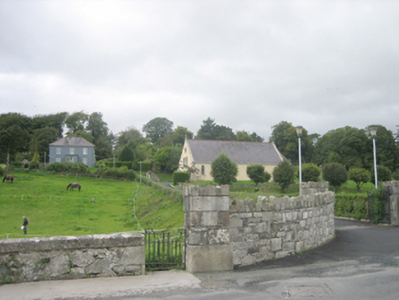 This appealing and visually effective hall-type Catholic church, dating to the last decade of the nineteenth century, retains much of its early form and character despite some modern alterations and the construction of a modern addition to the north-west side of the entrance front. Integrity is enhanced by the retention of salient fabric such as the natural slate roof and the battened timber doors with decorative ironmongery. The rock-faced quoins to the corners, rock-faced surrounds to the openings, and the clasping rock-faced buttresses help to alleviate the plain smooth rendered main elevations and add textural and tonal variation to the exterior. The pointed-arch openings and the clasping buttresses lend it a subdued Gothic character that is a characteristic feature of its type and date. The decorative wrought-iron brackets to the door, the shouldered openings to the sacristy, the raised verges to the gable ends with cross finials to the gable apexes, and the terracotta roof ridge cresting to the roof add further visual and decorative interest. The bright spacious interior is notable for the attractive stained glass windows, particularly the colourful figurative window to the central opening to the apse, that help to flood the interior with coloured light, creating a contemplative and reflective space. The interior is also notable for the high kingpost timber roof structure and the gallery to the entrance gable. Occupying a prominent position on a hillside to the north of Rathmullan, this attractive church is an integral element of the built heritage of the local area. The simple boundary walls, stone gate piers and wrought-iron gates complete the context and setting. It forms a pair of related structures along with the associated parochial house to the south-east (not in survey), and is of social importance being a centre for religious worship for the local Catholic community. This building was originally constructed to designs by the eminent architect William Hague (1836-99), a prolific and noted architect who carried out many commissions for the Catholic Church in Ireland during the last decades of the nineteenth century (designing or altering some fifty churches throughout the island). Hague was also responsible for the designs for the richly-ornamented and much more complex St. Eunan’s Cathedral (see 40501168) in Letterkenny, which was completed under supervision of T.F. McNamara following Hague’s death. This church in Rathmullan was dedicated on 28th of August 1892. The main contractor involved was a James McClay of Strabane (IAA).