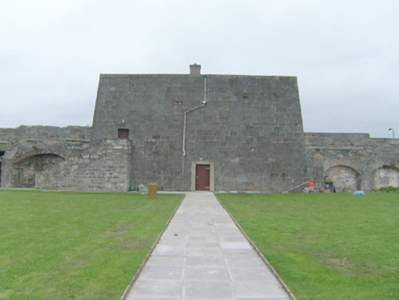 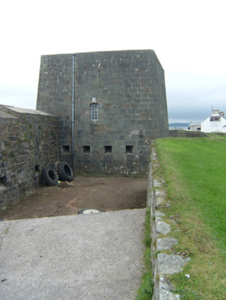 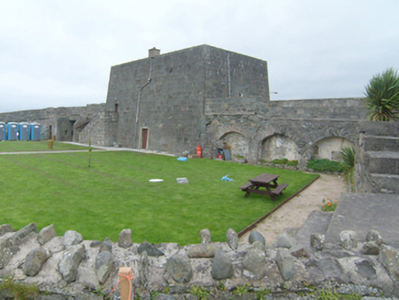 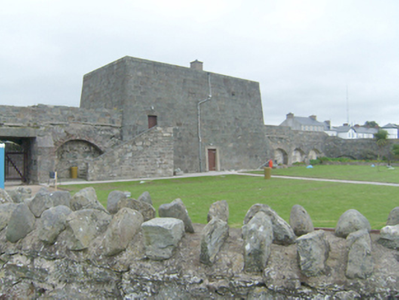 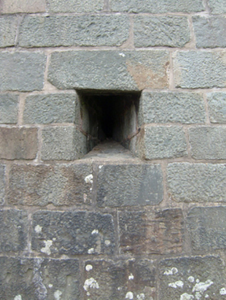 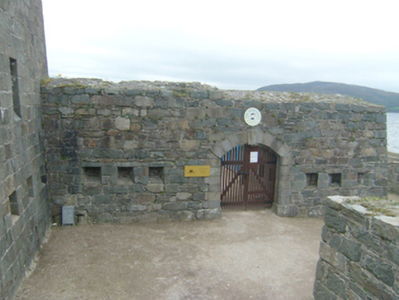 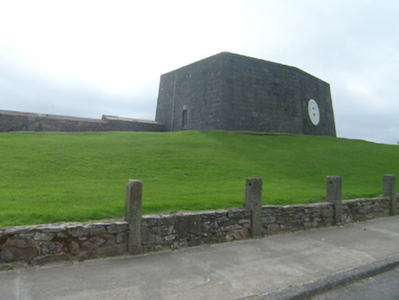 Former coastal battery, built c. 1813, comprising a two-storey blockhouse or ‘bombproof barrack’ on five-sided plan with mildly battered walls flanked by single-storey rubble stone curtain walls to the north and south (formerly with single-storey buildings to interior, now demolished), and with D-shaped traversing platform to the west (adjacent to coast) with five gun emplacements (on circular plan). Flight of external stone steps to the east elevation of two-storey barrack building giving access to doorway at first floor level. Section of rubble stone curtain wall to the south-west side of enclosure having segmental-headed carriage-arch with ashlar granite block-and-start surround, ashlar granite voussoirs with projecting keystone, projecting ashlar granite plinth blocks, and with modern timber gates. D-shaped enclosure to the east, adjacent to coast, having rubble stone boundary walls. Now in use as a heritage centre and museum. Barrel-vaulted ashlar stone roof to main barrack building having ashlar parapet walls over with rounded coping, and with modern rendered chimneystacks. Two circular gun mountings to roof. Roof reached from first floor Battered tooled coursed stone walls to main building, rubble stone to boundary and curtain walls. Square-headed gun loop openings having stayed reveals to the north and south elevations of barrack and to the west side of adjoining single-storey curtain walls. Square-headed gun loop openings to the section of curtain wall to either side of carriage-arch to the south-west. Single square-headed window openings to the north and south elevations of blockhouse having replacement timber windows. Central square-headed doorway to the east elevation of blockhouse at ground floor level having cement rendered surround, and with replacement timber door; square-headed doorway to the south end of the east elevation at first floor level having replacement timber door. Remains of rubble stone vaulted structures to the interior of enclosure to the north and south sides of blockhouse. Five former gun emplacements (on circular-plan) set along the interior of enclosure to the east side (overlooking Lough Swilly). Located to the east side of Rathmullan adjacent to the shores of Lough Swilly. Enclosure surrounded by dry moat with steep grass glacis to north-west. Sunken roadway to the west.

This impressive Napoleonic-era coastal fortification is an important element of the built heritage and history of County Donegal. Despite some modifications over the years, and recent works to create a museum, it retains much of its stark and original character and form. It is one of six such coastal batteries and Martello towers that were established along Lough Swilly to defend against possible French invasion during the Napoleonic Wars of the early years of the nineteenth century (there was an attempted landing in Lough Swilly by a French fleet under the command of the Hoche in 1798 with a force of some 8,000 men that was repelled at sea); these formed part of a wider group erected at this time at strategic locations along the Irish coastline and along the River Shannon. The other contemporary coastal defences along Lough Swilly can be found at Knockalla (see 40901801) and Macamish (see 40902801) to the north, and across the Lough to the east at Neds Point (see 40902922), near Buncrana, Inch Island (see 40903705), and at Dunree (see 40901813). These batteries were designed to work in pairs, and Rathmullan battery was paired with the fortification at Inch Island to the east with the forts defending the channel between. Plans were made for these six forts in January 1806 although construction work did not take place at majority of sites until 1812-3 (although temporary batteries were established at a number of sites from 1798, initially with modest British cannon supplemented with eight heavy canon from the captured French naval vessel the Hoche). By 1801 there was a temporary battery at Rathmullan armed with two 42-pounders. The 1806 plans (see above), proposed by Gother Mann, included the construction of a battery at Rathmullan with ‘a tower for two guns, extend battery to five guns and two mortars’; this was costed at £7,000. In 1809 the Ordnance Office approved estimates of £4,918 for the construction\improvement of the fortification at Rathmullan (as part of a total of an estimated £32,594 for ‘improvement’ of the six fortifications at Lough Swilly). The designs for Rathmullan consisted of a battery with five 24-pounders set on a D-shaped traversing platform adjacent to the coast protected by an austere two-storey barrack building to the west with two 5.5-inch howitzers of the roof; this was built as planned. To the north-west of the barracks was a detached powder magazine (the vaulted basement level of the two-storey barracks was probably also a powder magazine), there was a guard house adjacent to the gateway to the south, and to the centre of the enclosure there was a shot furnace (Griffith's Valuation map c. 1860) where cannon balls were made. The barrack building was apparently constructed using stone imported from Scotland. Construction did not start until 1812 due to contractual issues. The works were supervised by Captain Cardew RE with Edward Edgar the contractor. A report of 1817 records that the planned five 24-pounder guns and two 5.5-inch howitzers at Rathmullan were installed by this time. Rathmullan Fort remained in use until 1869 when the gunners stationed here were withdrawn. It was restored in 1990 as a museum and heritage centre focusing on the old Gaelic order and the Flight of the Earls (which took place from Rathmullan), and is now an important amenity for tourists and for the local community. This impressive if austere structure dominates the coastline at Rathmullan, and is an important element of the built heritage and history of the local area.