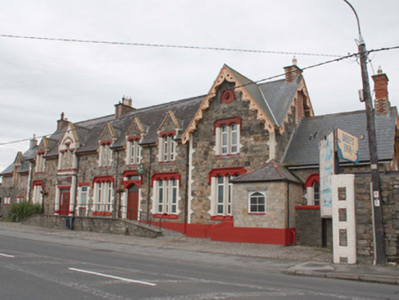 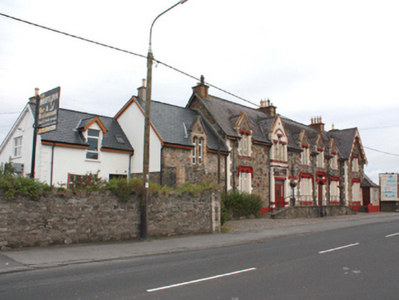 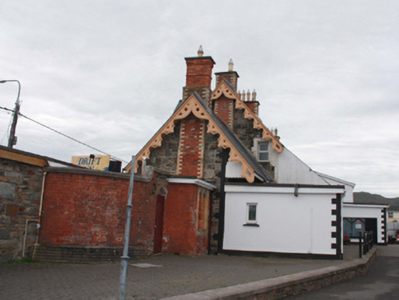 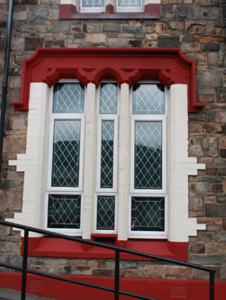 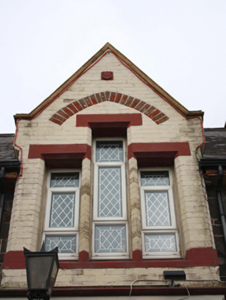 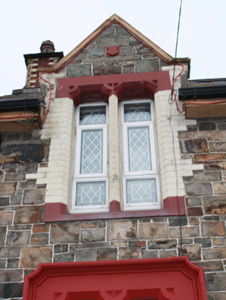 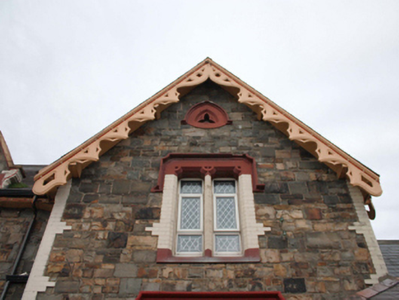 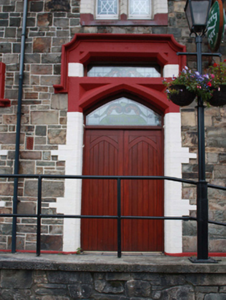 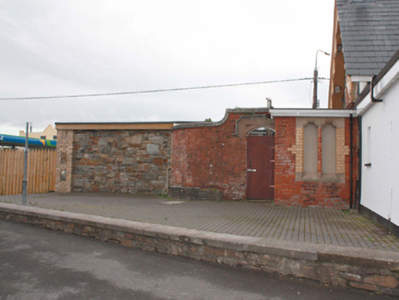 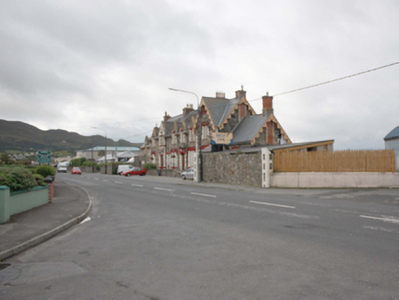 Detached six-bay-bay two-storey former railway station incorporating probable former station master’s house, built 1864, having projecting two-storey gable-fronted entrance bay offset to the south of centre, advanced two-storey gable-fronted bay to the north end of the main elevation (east), gabled-fronted half-dormers, and single-bay single-storey block and single-storey flat-roofed block attached to the north gable end. Now in use as a public house and restaurant with modern porch to the north end of the main elevation (east), modern two-storey additions to the south, and with additions to the west elevation to former platform now forming part of dining area to restaurant. Pitched natural slate roofs with red brick chimneystacks having yellow brick detailing to margins and with polygonal clay pots, decorative pierced timber bargeboards to gable ends and to advanced gable-fronted bays, ashlar stone coping to dormer openings, and with profiled cast-iron rainwater goods. Red brick chimney breast to the north gable end projects from wall with yellow brick detailing to the margins. Snecked and coursed squared rubble stone walls over projecting smooth rendered plinth, and with decorative brick quoin detailing to the corners. Cast-iron columns to former platform at rear. Square headed window openings, paired at first floor level and tripled at ground floor level, having painted brick reveals and mullions, moulded stone sills, carved cut stone haunched lintels with hoodmouldings over, and with replacement windows. Cut stone plaque to gable apex of advanced bay to the north end of the main elevation having trefoil motif and hoodmoulding. Cut stone shield motifs to gabled bays and breakfront to the south. Central Tudor-arch headed door opening with painted brick reveals, carved haunched lintels with hoodmoulding and overlight, and replacement timber panelled doors. Square-headed doorway to the advanced bay to the south of the front elevation having replacement timber door, and cast-iron quarry-glazed overlight and sidelights. Set back from main approach road to Buncrana from the south with remains of former platform to the west. Former water tower (see 40815016) to the west.

This very fine and ornate former railway station, built in a robust Tudor Gothic-style that was adopted for many mid-to-late nineteenth century railway stations throughout Ireland, retains its early form and character despite modern additions and alterations to accommodate new uses. The gable-fronted half dormers, and the advanced gable-fronted bays helps to create a varied and complex composition. The contrast between the rock-faced dark dimension stone and the brick and cut stone detailing creates an attractive polychromatic appeal to the main elevations. Decorative interest is added by the intricate timber bargeboards to the gables and the ornate cut stone haunched lintels with hoodmouldings to the window openings. The retention of the natural slate roof adds to its integrity but the recent loss of the cast-iron diamond pane windows detracts somewhat from its visual expression. This fine structure was originally built to designs by the Derry-based architect Fitzgibbon Louch (1826 - 1911), who is probably best known for his designs for the magnificent Lough Eske Castle (see 40909401),which was built in 1859 – 61. This station was described in the ‘Dublin Builder’ in 1864 as ‘being erected for Londonderry & Lough Swilly Railway Co. Faced with broken ashlar, white and red brick and Scotch stone dressings’. Its opening in 1864 played a major role in the development of the town as a tourist destination. This railway station was originally built as the terminus of the Derry to Buncrana section of the Londonderry to Lough Swilly Railway line, which opened on the 8th of September 1864, and closed to passengers in 1948 and closed completely in 1953. It was originally built by the Londonderry & Lough Swilly Railway Company, who also built the later extension of the line to Carndonagh, which opened in 1901. This line to Buncrana was originally a standard 5ft 3-inch gauge but was regauged to the 3ft narrow gauge in March 1885; the later line was also of this narrow gauge. This is the largest station still standing in Inishowen and is an important historical reminder of the age of the railway and a relatively short but significant era in the history of transportation in the county. As such it represents a pivotal moment in the economic and social history of Buncrana and indeed the entire Inishowen Peninsula, opening it up as a major seaside resort town during the late-nineteenth century. Alterations relating to the building’s change of use and the loss of original window fittings are unfortunate but are, perhaps, outweighed by the benefits of retaining the building in continued use. This former railway station now acts as an interesting historical reminder of the formerly extensive railway network in County Donegal, and is an integral element of the built heritage of the local area and of the wider transport heritage of the county. It forms a pair of related sites with the former railway water tank (see 40815016) to the west of the site.