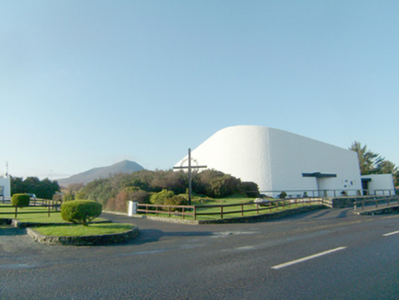 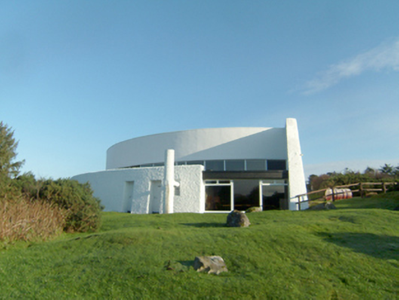 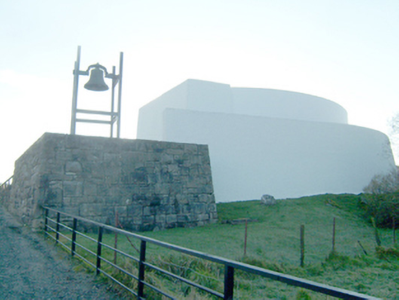 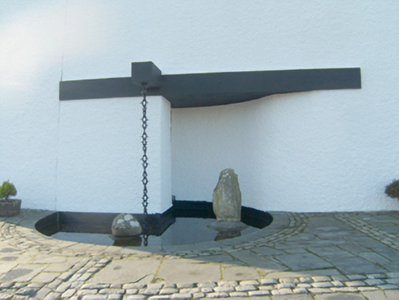 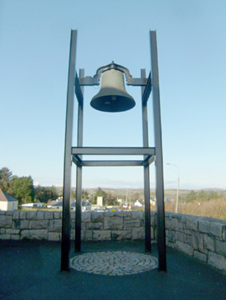 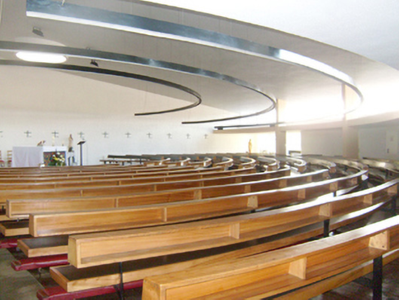 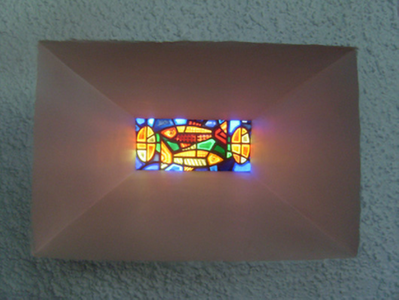 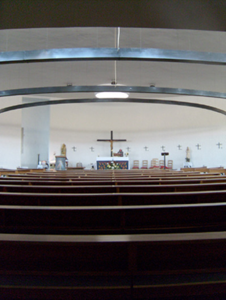 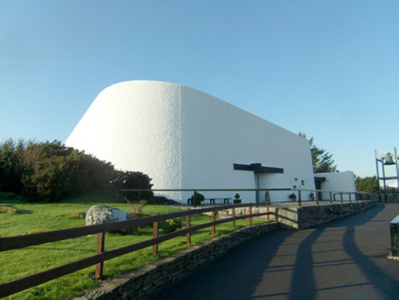 An influential contemporary church designed by architect Liam McCormick (1916-96) who is considered the father of modern Irish church architecture. With influences from Le Corbusier’s chapel at Ronchamp (1950), it derives its form from its context, reflecting the humped form of Muckish Mountain and integrating it into the rugged landscape. The fan-shaped plan conceals confessionals, sacristy and ancillary features within the body of the building. The main body of the interior of is dominated by the curved lines of seating facing the raised altar with metal light fitting\rails over that mirror the seating arrangement. The relationship between light and space in the building is significant. The main church hall is lit by openings at clerestory level, a domed skylight over the altar and by clear floor-to-ceiling window openings to the rear with views to Muckish. The more intimate spaces are lit by smaller openings; the baptistery overlooking a circular pool that originally let water into the interior of the church, symbolic of the rite of baptism and the dark; reflective space within the Blessed Sacrament chapel lit by a series of small stained glass windows. This building demonstrates the contemporary architectural thinking on churches at the time (particularly in Europe, Swiss church architecture in particular) with simplicity of materials, use of new building technologies, minimal architectural decoration, use of natural light, and the use of modern art produced by individual artists as opposed to mass-produced copies of religious images. This church at Creeslough is the fifth in a series of seven churches McCormick designed in Donegal. It was the first built following his celebrated Church of St. Aengus at Burt (see 40904702) and is considered one of his most innovative and striking commissions. Like all of McCormick's church architecture, St. Michael's can be seen as a collaborative work with various Irish artists; the stained glass windows to the Blessed Sacrament chapel (depicting images from stories in the Bible) is the work of Helen Moloney; the baptismal font is by John Behan who is also designed the cross with ‘the crown of thorns’ to the south-east of site; the tabernacle is by John Behan with enamelled panels by Helen Moloney; and the altar tapestry was designed by Helen Moloney and executed by Veronica Rowe. The church was built by John Hegarty, and was constructed at a cost of £55,000. It was built as a replacement for the old church at Ballymore to the north-west, also called St. Michael’s (see 40902603), which was founded in 1784 and rebuilt c. 1830. The bell form this earlier church is reused at the freestanding belfry at the replacement church, which now acts as an historical reminder of this former place of worship and offers continuity between the two sites. The new church was commissioned by Rev. Anthony McFeely, Bishop of Raphoe, who commissioned many of McCormick’s churches in Donegal. This church at Creeslough is considered one of the most important modern churches in Ireland, and is an important element of the built heritage of County Donegal. The contemporary single-storey parochial house (see 40813008) adjacent adds to the context and setting.