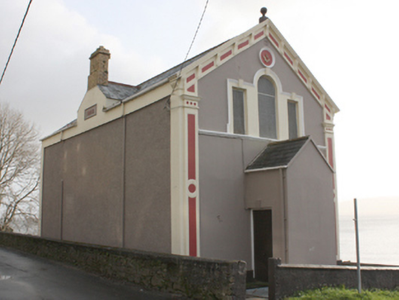 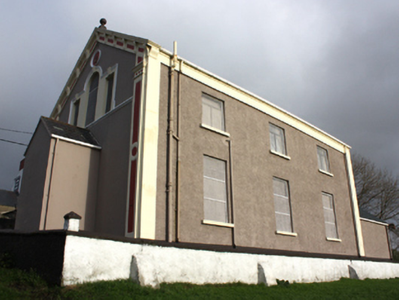 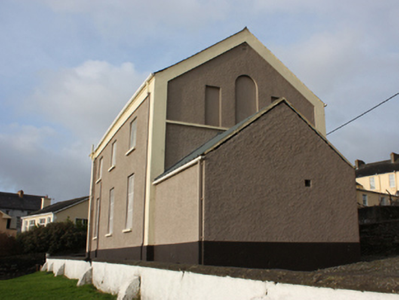 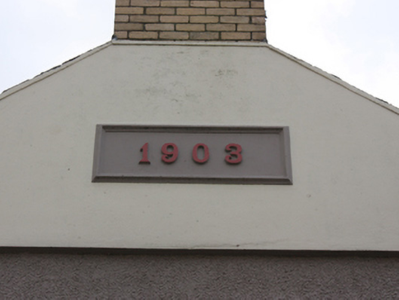 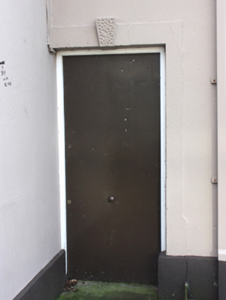 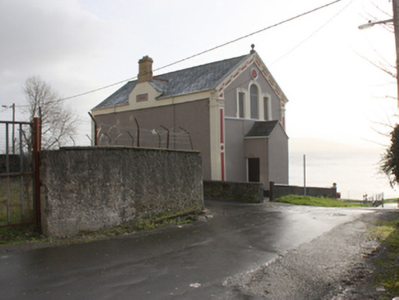 This simple gable-fronted Masonic hall\lodge is an interesting addition to the streetscape to the south-east of the centre of Moville. The plain form of this building is enlivened by the attractive and extensive rendered detailing to the front elevation, including bracketed rendered eaves course, corner pilasters with capitals, moulded render roundel motif with the typical Masonic ‘square and dividers’ motif, and by the Venetian window with architraved surround with keystone motifs, which help to give this hall a strong architectural presence. Typical of many such halls of its type and date all the architecture is to the front, with an elaborate front contrasting with the austere and prosaic side and rear elevations. It was built to designs by the architect T. Wright in 1903 at a cost of £500. It is named St. Columb’s, and is Lodge Number 297 in the Donegal and Londonderry Branch\Province. The ground for the building was leased from the Right Hon. Dr. Robert Montgomery (father of Field Marshal Lord Montgomery of Alamein) of nearby New Park (see 40809049). It probably replaced an earlier Masonic hall in Moville, location unknown (possibly a temporary arrangement in a nearby house etc.) as the Lodge was originally constituted on 30th October 1900 with a Thomas Wright its ‘Foundation Master’. Overlooking Lough Foyle it is a distinctive landmark in the streetscape of Moville, and is an integral element of the built heritage of the town.