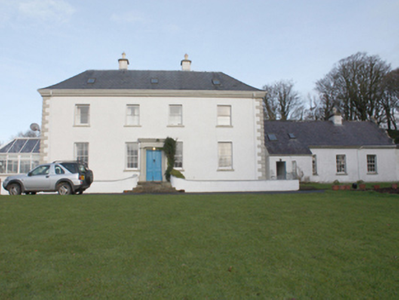 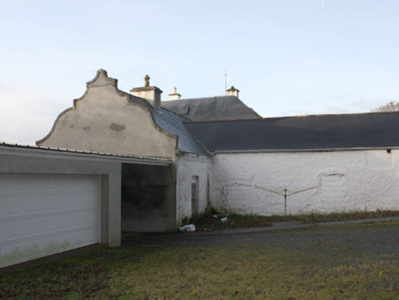 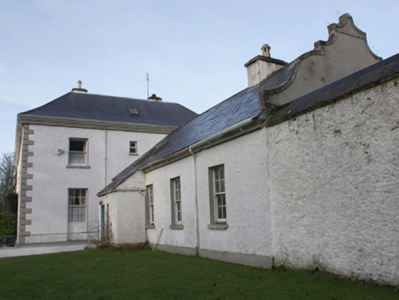 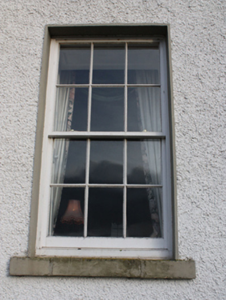 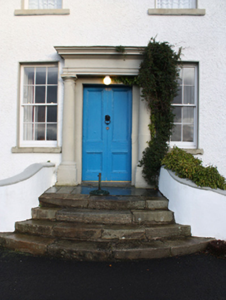 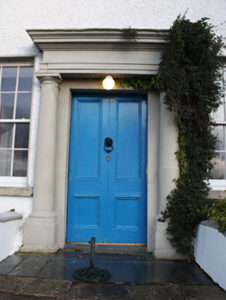 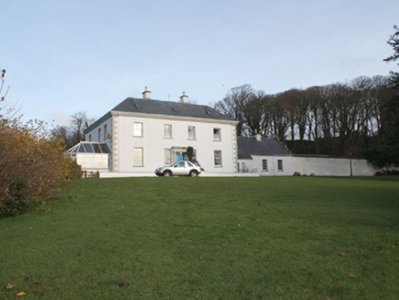 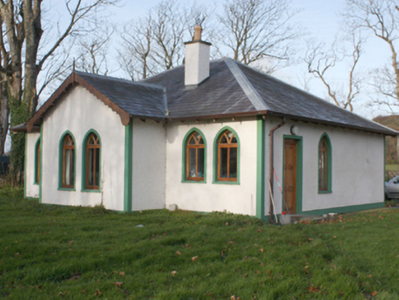 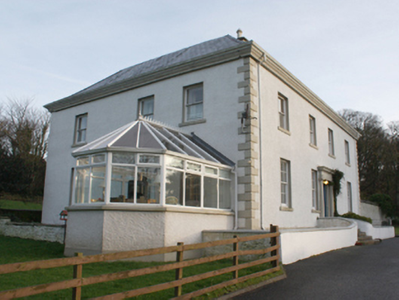 This well-proportioned and substantial mid-eighteenth century\mid-Georgian country house retains much of its original character and form despite some modern alterations and additions. The rather austere front elevation is enlivened by the well-detailed Tuscan doorcase, which provides an attractive central focus and adds some decorative interest this otherwise plain edifice, while the graceful flight of curved cut stone steps to this entrance adds addition appeal. The window openings diminish in size from the ground floor to the first floor, which adds to its classical character. The pronounced eaves cornice and the paired chimneystacks add some interest at roofscape level. The curvilinear quasi Dutch gable to the east end of the single-storey block adjoining to the east of the main building is a curious feature that adds interest to this otherwise prosaic service wing. This fine building was originally constructed for George Harvey, the High Sherriff of County Donegal in 1758. Built by George Harvey (born 1713), High Sheriff of County Donegal in 1758. Harvey acquired this considerable estate shortly before this date. The estate and house were later inherited by the Revd. John Harvey (born 1742), his son Robert Harvey (born 1770, married in 1801), and later by his son John Harvey [Junior] JP DL, who served as High Sherriff of County Donegal in 1836. The estate was described by Lewis in 1837 as ‘the residence of J. Harvey, Jun., Esq., situated in a beautiful demesne embellished with flourishing plantations, which, are highly ornamental in this bleak and exposed district’. The Harvey family were considerable landowners in Donegal owning an estate(s) of some 25,593 acres in the county in 1876 (when in the ownership of George Miller Harvey JP DL, High Sherriff of County Donegal in 1870). It remained in the ownership of the Harvey family until sold by George Miller Harvey (born 1908) in 1973. Occupying attractive mature parkland grounds, this fine building forms the centrepiece of a large collection of related sites along with the complex of outbuildings (see 40801016) to the north, the former walled garden (see 40801017) to the north-east, the sundial (see 40801018) to the north, and the Harvey family burial ground (see 40801019) to the east, and is one of the more impressive element so the built heritage of the local area. The two modernised gate lodges (not in survey) and gateways to the west and to the village entrance to the south-east add to the context and setting. The gate lodge to the west is notable in that it is apparently the most northerly example of its type in the country.