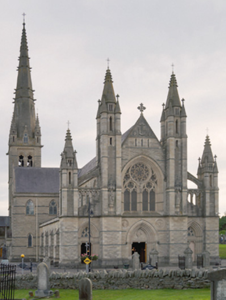 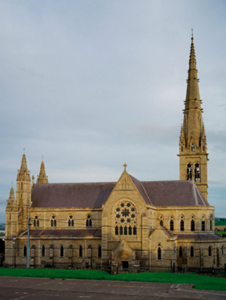 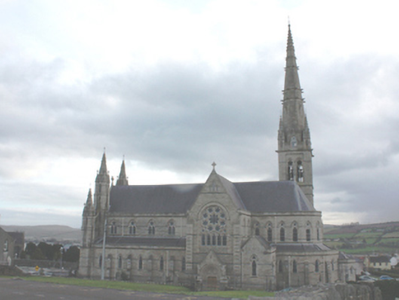 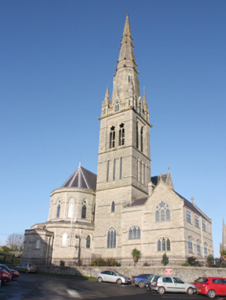 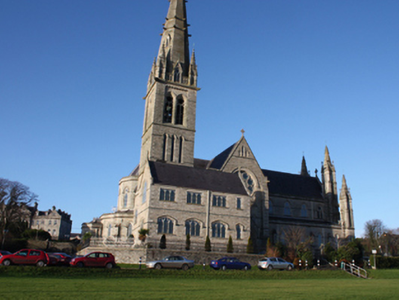 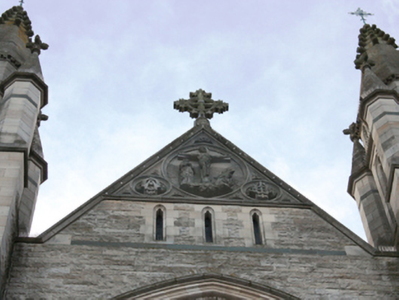 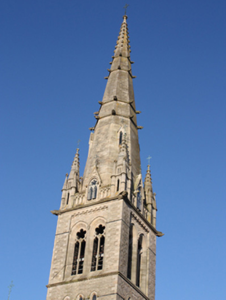 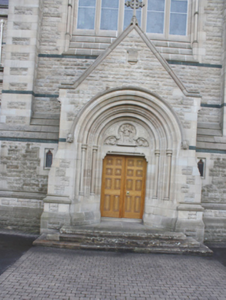 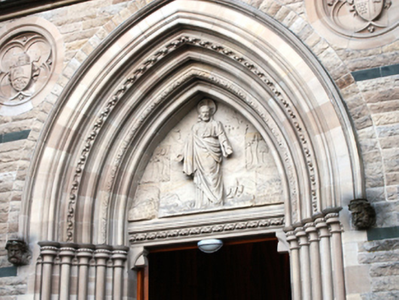 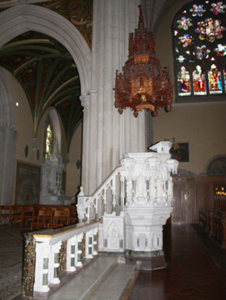 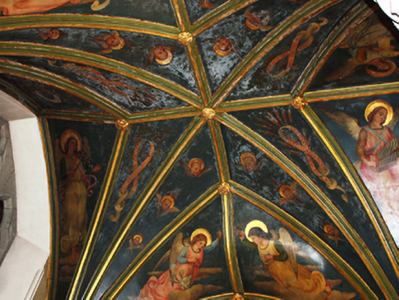 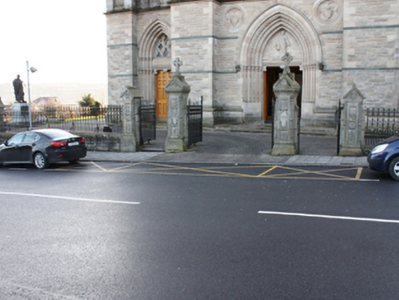 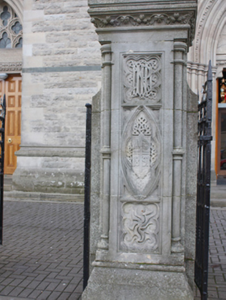 This spectacular essay in the (thirteenth century) French Gothic Revival style is one of the finest cathedrals in Ireland, and was the last to be built in a Gothic Revival style in the country. Of particular interest is the fine entrance front with four towers with spires over, linked by flying buttresses, and by the soaring crocketed spire to the south-west corner, which dominates the skyline of Letterkenny. Also of high interest is the early examples of Hiberno-Romanesque Revival detailing to a number of the doorways, and occasionally to the interior. Interestingly, the orientation of this building is reversed with the main steeple to the south-west rather than to the entrance front; this may be due to the slightly awkward hillside site. It is built in the high quality masonry (much of it sandstone from Mountcharles with some green slate detailing) with extensive cut stone and sculptural detailing of the highest quality throughout, both to the exterior and interior, much of it the work of Daniel Gilliland and Purdy of the firm Purdy and Millard of Belfast. Included in this work is the unusual sculpted internal chancel arch with carved detailing outlining the lives of St. Eunan and Columbkille. In addition to the architectural and sculptural art, this cathedral is further enlivened by the finest quality stained glass windows, frescoes, mosaics, gilding\stencilling, lierne and star vaulted ceilings, and marble altar goods (by Pearse and Co. of Dublin, pulpit has carvings of the Four Masters and the Four Evangelists), which combine to create a magnificent composition that instantly impresses. The chancel ceiling is the work of Amici of Rome while the walls of the ambulatory and the transepts have paintings by Richard King (1907-74). Of further note is the variety of window forms with very fine cut stone tracery that helps to alleviate some of the bulk of this massive edifice. The stained glass windows include works by Mayer of Munich, a firm whose work can be seen in many late nineteenth and early-twentieth century churches throughout Ireland, windows to the transepts by Michael Healy (1873-1941) dated 1910-11 (five-light window depicting the Convention of Druceatt, St. Helena window, and the SS Dallan and Conan Maol window), work by Alfred Ernest Child (1869-1939) depicting St. Finan and St. Moibhi, work by Beatrice Elvery\Lady Glenavy(1881-1970) depicting St. Columbanus and St. Gall, work by O’Brien depicting St. Columba, work by Ethel Rhind (1878-1952) depicting St. Charles Borromeo, and work by Richard Joseph King (1907-74). Perhaps of most importance is the series of ten stained glass windows at clerestory level (dated 1928) by the celebrated artist Harry Clarke (1889-1931) who was also responsible for two wall paintings at this cathedral. The very fine pulpit is by Pearse of Dublin and is carved in Sicilian marble with various Irish marble insets. There are twelve bells to the belfry\bell chamber carrying the names of the saints of Tir Conail - Dallan, Conal and Fiacre, Adomnán, Baithen and Barron, Nelis and Mura, Fionán and Davog, Cartha and Caitríona, Taobhóg, Cróna and Ríanach, Ernan and Asica and Columba. The fine organ is by Telford and Telford of Dublin. This building was constructed to designs by the eminent architect William Hague (1836-99) and its completion was supervised after his death by his younger partner T. F. McNamara (1867-1947). William Hague is depicted as St. William in a stained glass window close to the crossing. It was originally built for Dr Patrick O'Donnell, Bishop of Raphoe, later Cardinal O’Donnell. Bishop O’Donnell was the youngest bishop in the Catholic world when created in 1888 at the age of 32. Tenders were originally invited in September 1890 and construction work began in September of the following year. It cost over £300,000 to construct and the main building contractor involved as a McClay from nearby Strabane. It was reputedly built largely using funds raised in the United States of America. The cathedral was finally opened in May 1901. It replaced an earlier Catholic (pro) cathedral in Letterkenny, a cruciform-plan building constructed in the 1830s. This fine cathedral is one of the most important elements of the built heritage of Donegal, and the wider region, and is the landmark structure in the town of Letterkenny. It is interesting to note that this cathedral dwarfs the earlier Church of Ireland church (see 40501167) adjacent the east, and represents a monumental statement of the confidence and wealth of the Catholic Church at the time of construction. The high quality gate piers, gates and railings complete the setting and context of this magnificent edifice.