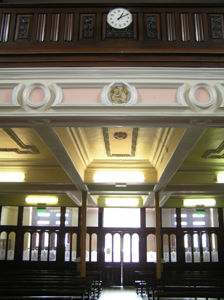 The Jesuits moved into the current house in 1862 and started building the church in 1864. It was begun during the rectorship of Fr. Thomas Kelly. The church was dedicated in 1869, although still unfiinished in 1897. Designed by William Edward Corbett and supervised by Charles Geoghegan on the site of Crescent House. It breaks the uniformity of The Crescent, giving it a focus and adding interest to the Georgian fabric. In 1867, Charles Lanyon and John McCurdy were the arbitrators and Sir John Benson the umpire, in the arbitration case of the failure of the roof of the new church. The builders were Mssers Ryan & Son. In 1900 William Henry Byrne made designs for a proposed façade. In 1922 Patrick Joseph Sheahan designed a chapel within the church. In 1938 Patrick Joseph Sheahan was responsible for the painting and decoration with the architectural firm Sheahan & Clery. The building of the church utilised the natural focus of the crescent form to give the prominence that the church needed. The very fine classical interior, with a wealth of quality materials and craftsmanship, adds to the overall architectural importance of this ecclesiastical site.