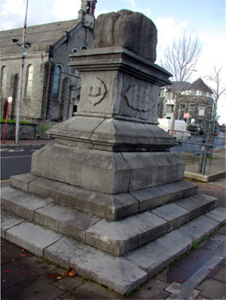 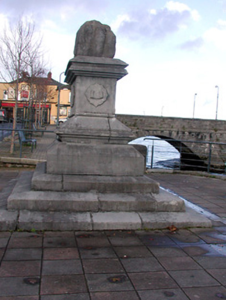 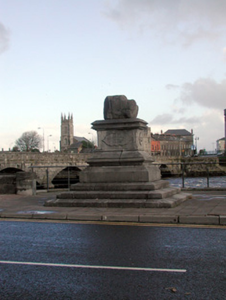 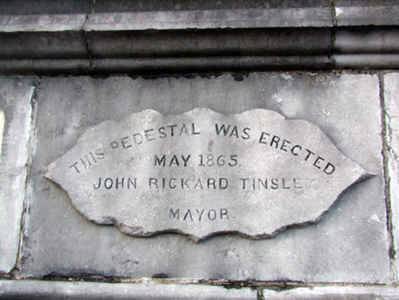 Freestanding limestone pedestal, dating to 1865, supporting an irregular rough hewn block of limestone which once served as a mounting block for horses. Pedestal is decorated with a relief of Saint John's Castle and is surmounted by a conical tower and cross, showing that Limerick was a cathedral city. This symbol is now the civic insignia of the Corporation. The Latin inscription is taken from Virgil's description of Troy. The pedestal was moved to its present location in 1990. Plaque reads: 'This pedestal was erected May 1865 John Rickard Tinsley Mayor'. Plaque on ground reads: 'Treaty Stone moved to this location 1990 Ald. Gus O'Driscoll Mayor of Limerick'.

The Treaty Stone occupies a prominent position at Thomond Bridge, and across the river from Saint John's Castle and is one of Limerick City's most famous monuments. The pedestal was reputedly designed by William Edward Corbett (1824-1904). It was regarded traditionally as the writing table on which The Treaty of Limerick, 3rd October 1691, was signed. This tradition dates back at least to 1797, when John Harden of Cork mentions it in his diary, and Dr. Young, Bishop of Limerick, born in the city in 1746, so described it to Dr. Milner, Vicar Apostolic of London, in 1808. The Treaty of Limerick ended the Williamite war in Ireland between the Jacobites and the supporters of William of Orange. The stone stood outside the Black Bull public house in Thomondgate, where it was used as a step for mounting horses. There it was attacked by souvenir hunters, and to prevent this, a subscription was begun in 1863, which resulted in its erection onto a pedestal opposite its former position, in 1865. The Treaty Stone bears little resemblance to its former shape, in fact it is little more than half its original size. The stone was moved once again in the 1980s, the proximity to the corner of Thomond Bridge and the busy traffic from High Road, raising fears that the stone and pedestal may have caused the road to collapse and cave in.