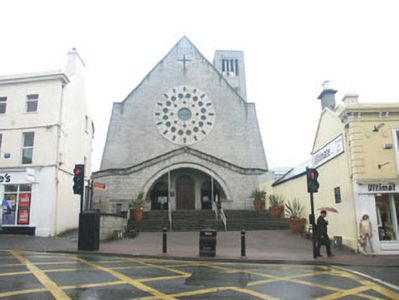 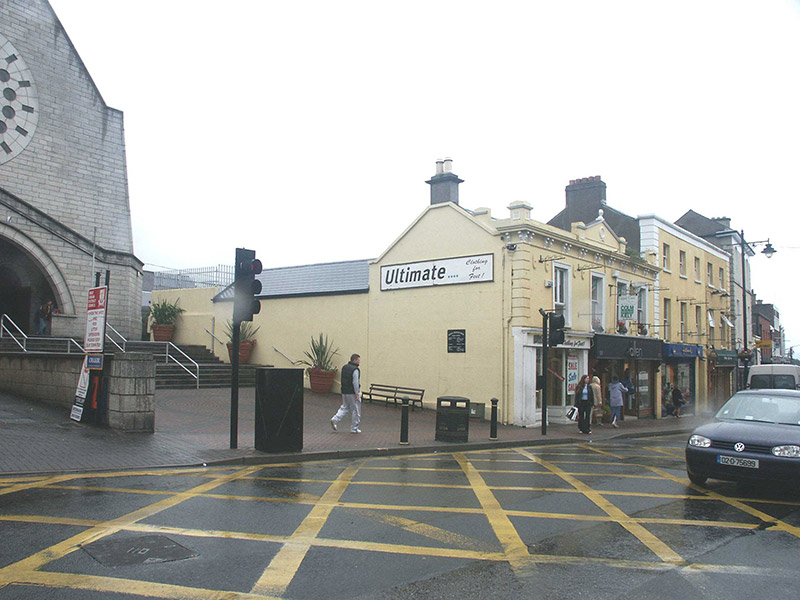 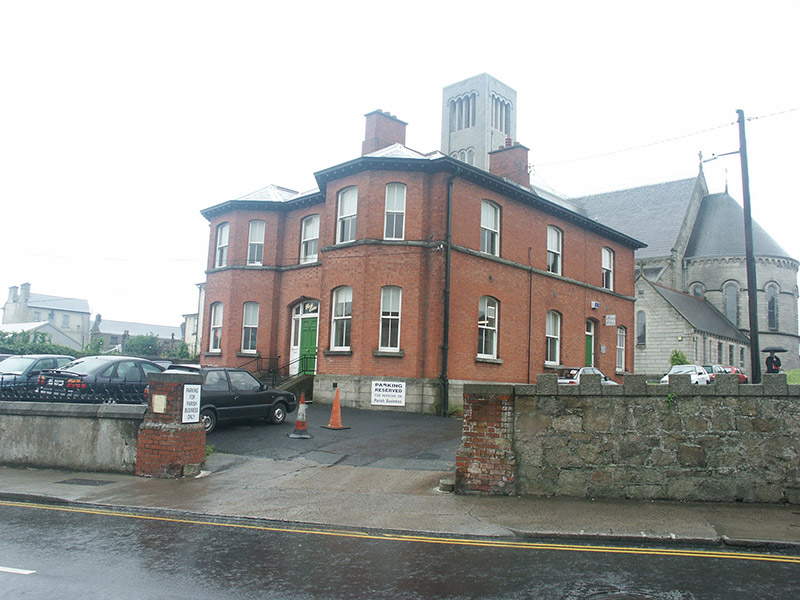 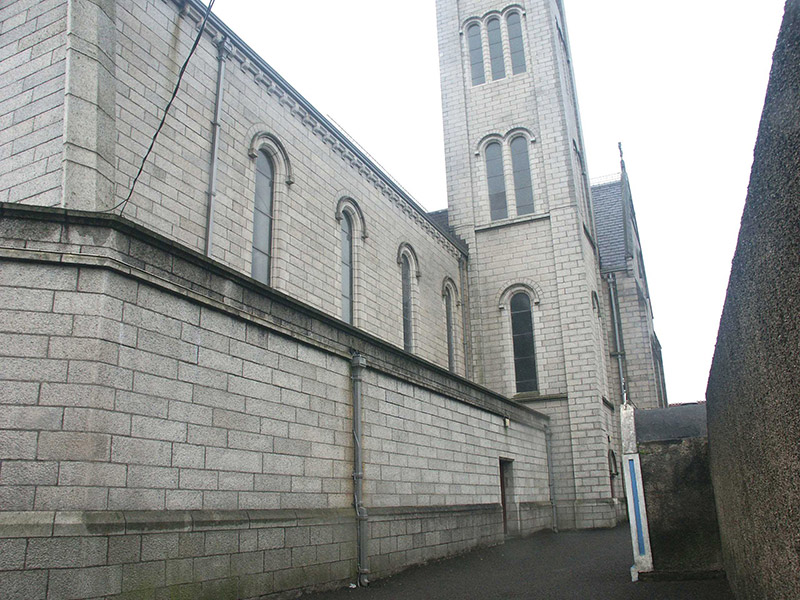 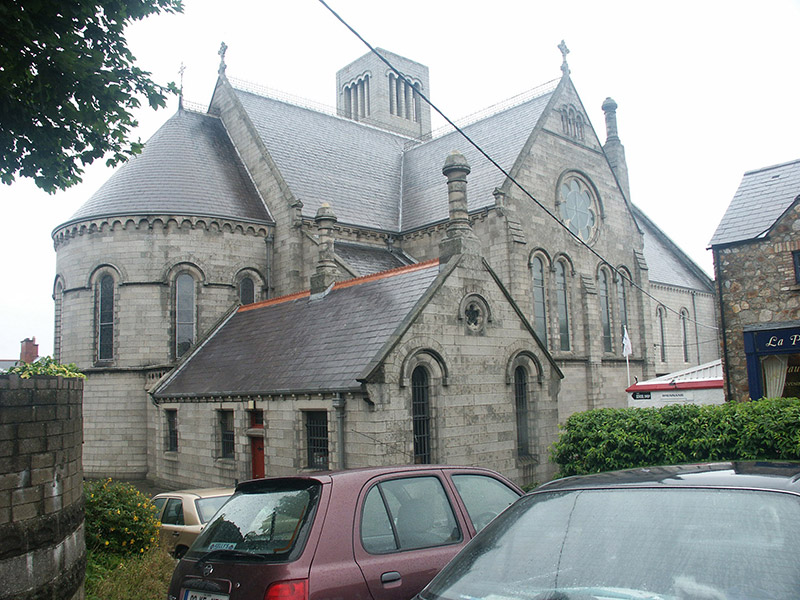 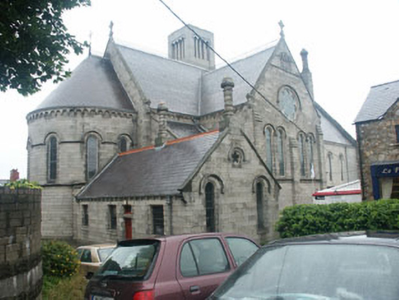 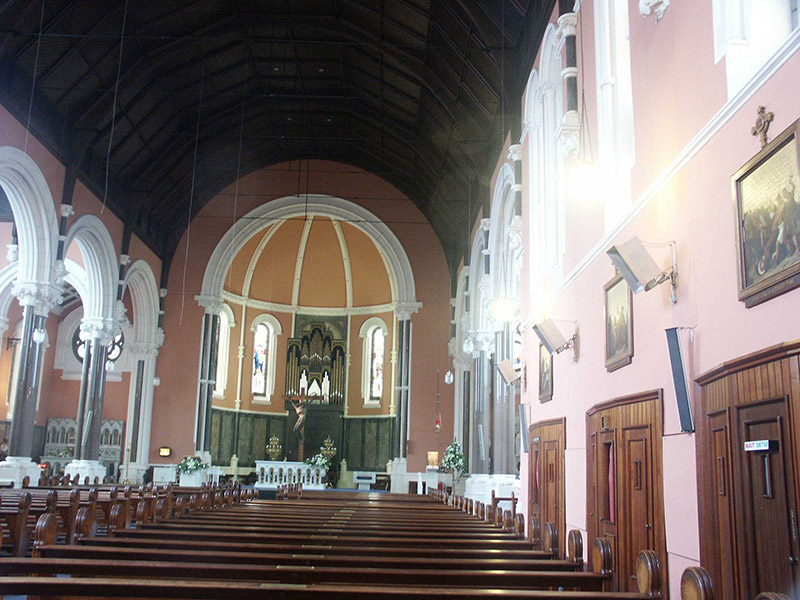 Detached multiple-bay single-storey double-height gable-fronted Roman Catholic church, the generally Romanesque western (rear) half of which dates from 1895-97, with the Modernist front half constructed in 1965. The building is roughly rectangular in plan, but with a single-storey full-width gabled porch to the front, shallow but relatively long single-storey side projections, gabled full-height transepts, a rounded chancel with relatively long single-storey vestry / office projections, and, to the north side, a five-stage flat-roofed tower. The transepts and chancel all date from the 1890s, with the porch, shallow side projections and tower added during the 1965 reconstruction, when the earlier tower, (which was to the front gable), and much of the nave were demolished. The walls are of dressed granite with moulded string courses, buttresses, a decorative eaves course and moulded drip stones. The detailing to the 1965 eastern half of the church, though similar to the earlier section of the building, is more simplified, and the front gable overtly Modernist, with battered edges and a stylised rose window. The tower has a stylised appearance also. The pitched roof is slated and has granite parapets with cross finials and decorative cresting, and tall octagonal granite chimneystacks with pronounced coping. The entrance, which is approached by a wide flight of steps with modern metal railings, consists of a broad segmental open archway beyond which are three large semi-circular doorways with timber double doors. The windows are largely tall and narrow with semi-circular heads and stained glass, with rose windows to the transepts and front gable, and some flat-headed windows with frames (and security screens) to the rear vestry / office projections. Cast-iron rainwater goods. The front gable of the church faces onto a street, but is separated from the roadside by a paved forecourt. Internally the long nave has plastered and painted walls with tall arcades with clusters of polished granite columns separating the nave from the transepts, a large archway separating the chancel from the nave and a vaulted coffered timber ceiling. The columns have decorative floral capitals and roof trusses rise off decorative corbels set on three-quarter colonnettes.

Large prominently sited church, whose overtly Modernist 1960s front gable and stylised tower stands in contrast to the more traditional 1890s Romanesque rear. Arguably this contrast does not work, but there is no denying the impact of the building upon Bray town centre.