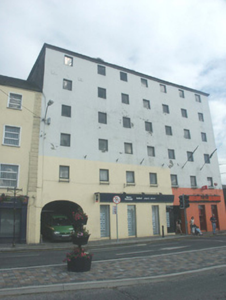 An impressive large-scale warehouse representing an integral component of the mid nineteenth-century built heritage of New Ross having historically supported some of the commercial or industrial activities centred on the quays. Although modified to accommodate an alternative purpose, the elementary attributes of the composition prevail including the vertical thrust of the massing rising above the flanking ranges in the street, the traditional construction in unrefined local fieldstone with red brick or squared stone accents, the regular, almost monotonous arrangement of small-scale openings on each floor, and so on, thereby maintaining the status as an important landmark enhancing the aesthetic appeal of a diverse streetscape.